“Can you make it out Alive?” Always verify the attraction’s dates and hours prior to visiting.

*Ghost Hunt $35 (7 PM to 11:00 PM): We will provide ghost hunting equipment, but feel free to bring your own! Audio equipment & digital cameras are allowed.

Haunted History:
The Imogene Theater, 6866 Caroline St., Milton, suffered heavy structural damage in January 2009 from a devastating fire but was rebuilt several years later. This does not prevent people from seeing a man walking on the balcony or the ghost of young Imogene Gooch, the daughter of the man who bought the theater in the 1920s and the building’s namesake. The location is rumored to be built on an Indian burial ground.

The Imogene Theatre is a small timely open stage theatre that was opened in October of 1913 by the president of Milton’s First National Bank. The president decided to open this new auditorium because four years prior to opening it, there was a great fire that destroyed most of Milton’s commercial district and the president felt a new auditorium was necessary. When the building first opened it was titled the Milton Opera House. The early shows that made it to the opera house were mostly made up of traveling shows and silent moving pictures, the very first being The Passion Play, a depiction of the life of Christ. By 1921, the opera house was bought out by Mr. Gooch and was renamed the Imogene Theatre, after his younger daughter. Sadly, Mr. Gooch died months after the purchase but the name stuck.

By 1938, the Imogene Theatre became the first building in Milton to have central air conditioning. With the increasing amounts of technology and the creation of sound and color films, the Imogene projected its screens with classic movies. Some of the popular are Gone With the Wind and the Wizard of Oz. While these pictures were being shown upstairs, the first floor was being used as a retail space and was even home to the Milton Post Office for about 30 years. The theatre closed down years later in 1946 when a newer theatre was opened up down the road and the first floor became vacant in 1980.

In the years to follow, the Imogene Theatre had become old and decrepit. With a failing roof and plaster peeling off the building, it looked like an end to the once great theatre. But, in 1985 the building was purchased by the Santa Rosa Historical Society. The building was then restored by the historical society, with the help of some state grants, and was reopened in 1987.

After almost 100 years after the original fire that inspired the creation of the theatre, Downtown Milton was struck by another fire that badly damaged the theatre in 2009. Luckily with the help of over seven fire departments, the fire was put out and the building was saved. Many saw this fire as a blessing, as it gave the historical society a chance to properly restore the theatre to how it looked when it first opened.
Since the Imogene has been fully restored and is open to the public. The first floor of the theatre is now utilized as a museum that tells of all the hardships and wonders that the theatre had faced in the past.

The second form is still used as a theatre with many different events. The Imogene now hosts swing dancing events, high school jazz concerts that are open to the public, and even some movie nights. This small two-story theatre is a great place for family fun and can even be rented out for private events. Located in the center of downtown Milton and across the street from the Blackwater River, the theatre is the perfect place for community outreach and entertainment. 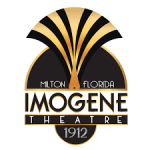 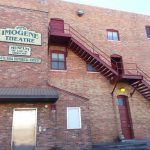 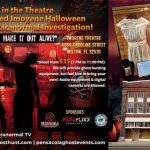 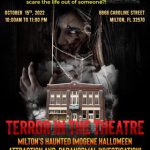