We feel that the cast is the most important aspect of what separates the great haunts from the meh ones. Unfortunately, it isn’t very often that we come across a great cast as typically there are either not enough actors, or some of the performances leave something to be desired and sometimes both. But this was not the case with Evil Intentions. Actually, we wouldn’t rate the actors here as ‘great,’ as ‘stellar’ seems to be a more appropriate word used to describe the amazing cast of characters we encountered during our visit. We were thoroughly impressed at how well each and every character fulfilled their roles as the actors who provided quick startles were just as effective as the ones who spoke more meaningful dialogue. We honestly didn’t come across one subpar performance during the entirety of both of our tours. It was quite apparent to us that the cast here love what they do as evidenced by the enthusiasm of the performances and the commitment to their roles. The actors in the cage maze deserved a special mention for their ‘acrobatic’ efforts and their ability to move so quickly and effortlessly. But of all the excellent performances we encountered there is one actor in particular that we feel really stood out and that is the Doctor. Everything about his performance was amazing, from the highly original dialogue to the sound of his voice and the creepy body language. We don’t want to give anything away but we will say that he really took us out of our comfort zone by directly involving our group in the scene and made us question whether or not he was actually acting. If we were giving out awards, the Doctor at Evil Intentions would most definitely win ‘Actor of the Year’ with a performance we shall never forget. The entire cast really deserves to be applauded as they are a testament to what makes a haunted attraction truly great!

The theme for Evil Intentions is titled ‘The Ritual’ which is based on Satanic Cult activity and several unsolved murders that have been documented in the building that houses the haunt. You couldn’t ask for a more authentic location, that much is for sure! We found the theme to be well executed as the majority of the sets, script, characters roles, and costuming fell in-line with the overall backstory. We found ‘The Ritual’ to be one of the most original and creative themes of any haunt that we have ever toured.

General admission is priced at $25 and a VIP Fastpass is only $10 more at $35. We visited Evil Intentions twice in 2017. The first visit was near closing time on opening night in which were able to walk right up to the ticket booth, purchase our tickets and enter the haunt in less than 5 minutes. Our second visit was during the 3rd weekend of the October, which is typically the busiest weekend of the season for haunted attractions and on this particular evening, Evil Intentions was experiencing a ‘record night attendance wise,’ according to the owner. The wait in the General Admission line was well over 2 hrs making the $10 up charge for a VIP ticket a wise investment, to say the least! During our first visit, it took our group a total of 30 minutes to get through from start to finish and 21 minutes during our second visit, for an average time of 26 minutes which gives us a MPD (minutes per dollar) score of 1.04. We feel this haunt provides a very good value for the money spent because they entertainment provided is stellar and the use of available space is very well done. Evil Intentions impressed us so much this season that we are already counting the days until we can visit again in 2018! 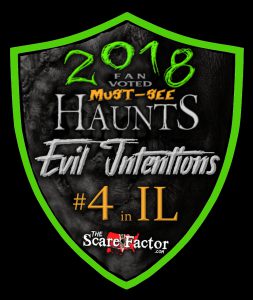 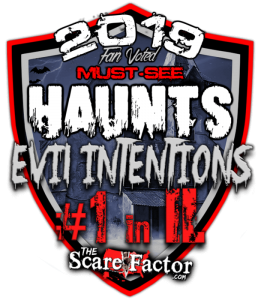 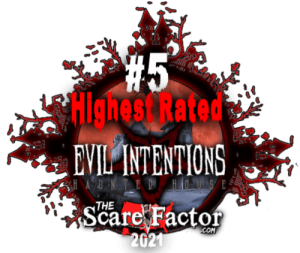 Scariest Haunt in IL (Given by: The Scare Factor)