Smack dab in the middle of the thumb area of Michigan lies an outdoor haunted attraction that seems cut off from the rest of civilization. This haunt is literally out in the middle of nowhere and is one of the eeriest locations for an attraction that we have ever seen. Wicked Woods of Terror (WWoT) has been offering its unique brand of ‘old-school’ frights to willing victims for the past 5 years.

We especially enjoyed the Pigman who followed us around for several scenes and the character who wore a mask with glowing crosses. But the actor who stood out above all others was ‘Disgusto’ the clown. One moment, he had our review group really creeped out and, the next, laughing hysterically at his jokes and highly-entertaining antics. Be forewarned, though, that he just may want you to ‘play with his big balls!’

While WWoT doesn’t appear to have as large of a budget as some of the bigger haunts in the area, they do work very well with what they have. The set designs and effects have more of an old-school feel to them, but we found them to be creative and quite original. We really enjoyed the neon colored Clown Room that housed the infamous Disgust the Clown, the “hellelevator,” and the creepy Cemetery. The room that had the ‘sinking ground’ effect was also a highlight, as it really felt as if we were going to sink into the Earth around us. The lighting in particular was well-executed. The scenes themselves seemed to have just the perfect amount of light to see everything well and there was just enough light in between the sets to be able to see where we were going.
We did feel the sound effects were a little lacking and noticed an absence of a soundtrack with the exception of one room.

Some of the scare techniques used by WWoT include unnerving sounds, intimidating dialogue, entrapment and several well-timed ‘pop’ scares. There was one great moment when we thought for sure a lady in the rocking chair was an animatronic creation. She ended up giving our review group quite the scare when we noticed she was actually real! There were a few excellent environmental scares, most notably when walking through one scene that felt like we were sinking into the ground. The characters made sure that everybody in our group got an equal dose of frights by targeting each member of our group evenly.

Another great aspect of this haunt is that when the cast noticed you were not scared, they would at least attempt to entertain you with jokes, making fun of our appearance and getting us to sing ‘Old MacDonald Had a Farm,’ among other things. They did an admirable job of making sure we were entertained during the entirety of our tour

From start to finish, it took our review group 26 minutes to complete our tour, for a MPD (minutes per dollar) score of 1.73. We feel that you get a lot of quality entertainment for your money here and that it is a great value. WWoT has an annual off-season event called ‘Escape The Woods,’ which is a unique combination of a haunted trail and interactive escape game. This event is usually held during the summer months, so make sure to keep an eye on their Facebook page for updates. 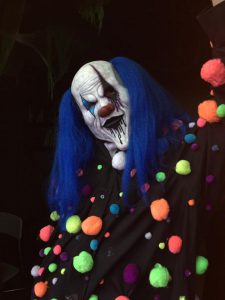 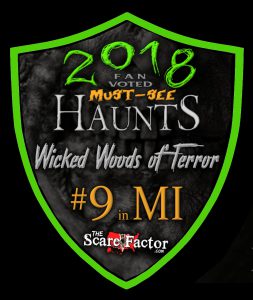 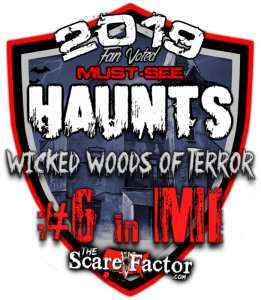