Abandoned Haunted House Complex, located smack dab between Milwaukee and Chicago, came onto the haunt scene 6 years ago with their unique brand of horror, offering a ‘Trifecta of Terror’ for one low price. There are 2 indoor attractions, Ambush & Hysteria which are ‘in-your-face’ haunted houses that combine a narrow, claustrophobia-inducing layout with high energy actors. The 3rd attraction, Stalkers, is one part outdoor corn maze, one part indoor haunted house, which together equals one terrifying experience! There is a side attraction available called “Shoot a Freak,” which is a zombie paintball shooting gallery.

It must be mentioned that it was excessively hot during the night of our visit, with temperatures reaching near 100 inside the haunts! Coupled with the fact it was opening night, we’re pretty certain that we didn’t get to see the cast at their very best. But given the circumstances, we’d say the actors did a pretty admirable job. Abandoned employs around 100 actors, which seemed to fill the 3 attractions quite well. We never came across a single actor that broke character during our entire visit, even when we chose to interact with them. The majority of the cast were intense and pretty darn energetic when considering it was practically ‘roasting’ inside the haunts. While we didn’t hear a lot of engaging dialogue, when the actors did speak it was usually something scene appropriate. We would have liked a little more interaction from the cast, as most seemed more comfortable with “quick startle” type engagement. A small portion of the actors seemed a little bit green, perhaps not quite comfortable with their roles yet, but they were the exception, not the rule.

As soon as we got out of the car, we heard music, chainsaws, and screaming in the distance. The building itself has a really cool and unusual teepee-shaped structure out front that is original to the building. There is a large illuminated ABANDONED sign out front as well and the ‘Shoot A Freak’ shooting gallery is available right as you walk in. Even though it was opening night, there was a pretty decent sized crowd on hand who appeared to be having a really good time watching videos on the fairly larger movie screen and getting entertained by several roaming actors. One feature that we really enjoyed was that there were different kinds of music at the various locations of the attractions, one area would have rock and other hard metal. The tuneage was cranked up fairly loud which seemed to do the trick of getting us both a little more amped to enter the haunts. As mentioned earlier Abandoned is located directly adjacent to the main highway, which does detract somewhat from the overall atmosphere because of the traffic. However, the loud music being played does do a pretty good job of drowning out the highway noise. The building that housed Ambush & Hysteria had a facade that resembles that of an old decrepit building, which gave it a real authentic haunted house look.

A general admission ticket cost $25 for Ambush/Hysteria and $15 for Stalkers. However, we feel that the combo ticket is the way to go, as it is only $5 more at $30. A VIP Fast Pass can be added for only $10 more and is highly recommended on busier nights were the wait can be several hours long.There is also a zombie shooting gallery called ‘Shoot A Freak’ available for $5. Our tour times were as follows: Hysteria 17 minutes, Ambush 16 minutes and Stalkers 18 minutes for a combined total of 51 minutes. When dividing the tour time by the general admission price, we get a MPD (minutes per dollar) score of 1.7. We felt that Abandoned well deserved the high score as you do get a lot of quality entertainment for a very reasonable price. It’s always a treat for us to attend haunts that have more to offer than the standard 15 to 20 minute tour. We would love to come back sometime to see this place later in the season when the actors are more comfortable in their roles and during a time when the temperatures aren’t insanely high like they were during our visit. Even though we very much enjoyed our time here, we have a feeling we have not yet witnessed the best that Abandoned has to offer. We hope to be able to visit again in the not too distant future. 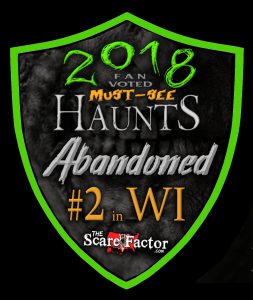 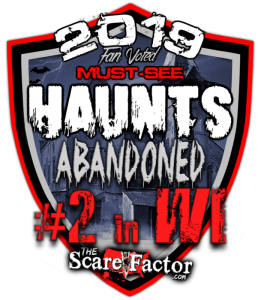 Emily – 10/10 – November 1, 2019Definitely a must ! Drove 2 Hours and it worth every minute . All the details were stunning . The …show more time these actors put in to make a great experience was amazing . Definitely scary but humorous at the same time !! Group of us went and we will return next year to see what kore they have done !!

Steve – 10/10 – September 30, 2017Wow, went to abandoned haunted house last Saturday and had a amazing time! I’ve been to lots of …show more haunted houses in Wisconsin and Illinois over the past few years but never to abandoned. After passing it multiple times we figured it was time to go. From the time we got there until the time we left we had fun. It was scary because there was smoke everywhere. We asked a security guard what it was from and they said stalker so we knew it was going to be awesome. I think my favorite part was in hysteria I think when a guy was in a prison shower with a bar of soap. My friend got so scared because he was blocked in the corner with him lol. Overall this was the best haunted house we have been to in years and definitely the best in the Milwaukee-chicago area! Highly recommend this place!