The Mansfield Reformatory is an incredibly ominous building all by itself so, it is no surprise that year after year, they put on a haunted house during the Halloween season. Being about 20 minutes from our house, we go to check it out every October, hoping that someone has done the facility justice and’sadly’that was never the case.

The cast here is incredible. There are so many unique and creative characters roaming the cell blocks of Blood Prison that it is difficult for us to pinpoint who our favorite may have been. Two of our favorites would have to be the hilarious axe-wielding clown that created his own sound effects by saying ‘chop’ every time he swung his axe’even in slow motion. The other is the guy that escaped his cryogenic chamber to play a game that he liked to call ‘Russian Roulette +5’… 6 shots’ yes, the gun was fully loaded (Seems the odds were definitely in his favor). The dialogue and banter was phenomenal and each one that we prompted had quick responses on the ready for us. We also feel like we need to give some props out for the persistence of the chainsaw guy at the end. His chainsaw wasn’t cooperating’and he wasn’t going to let it beat him. He kept tugging on the cord until it finally roared to life. Normally, we would count that as a ‘negative”but, oddly, it kind of added to the encounter. It created a nice bit of suspense, wondering when you were going to hear that familiar chainsaw sound.

Living and working in the area, we have seen the Blood Prison billboards along Rte. 30 (the highway that runs by the Reformatory) on both sides of the prison. Whether you are Eastbound or Westbound, there is no missing them. The staff at the ticket booth, a black school bus with flashing lights (which Jason installed the awning and air conditioner on at his day job), were all very friendly and helpful. After getting our tickets, they directed us where to go to enter the haunt. There are three entrances depending on which ticket you purchase; General Admission, Speed Pass or Lightning Pass. The Lightning Pass is the Speed Pass with the full-contact option. Outside of the haunt, there are several port-o-potties, food trucks and they even had a live band performing on an upstairs balcony. There are a few tripping hazards inside, but nothing inherently dangerous’just watch your step. The cast all seem pretty good about not trying to scare around these areas and that allows you to pay attention to where you are going.

The theme for Blood Prison is that all the deranged psychopaths, from around the country, have invaded the prison and claimed it for their own. You are now stuck in the middle of it and trying to escape with your life. While it is an interesting story line concept, to us it just kind of felt like the old ‘hodge podge’ theme’with a twist. However, the addition of the ‘Scary Clown Sightings’ was a very nice touch and they tied it all together nicely through the costuming, incorporating prison jump suits and other attire to blend the various aspects together. Other than the aforementioned Freddy glove, we didn’t really spot anything that was out of place and the fact that they are using an actual historic prison as their location definitely authenticates their theme.

Our trip through Blood Prison took us an impressive 36 minutes. With a General Admission ticket price of $20, that puts their Minutes Per Dollar Value rating at a 1.8, which we believe is the highest that we have seen all season. However, unless you just really enjoy waiting in lines, we would HIGHLY recommend the Speed or Lightning passes, which sell for $30 and $40 respectively. If you get a group of 20 or more together, they provide a group discount on each ticket. General Admission is $18 per person, Speed Pass sells for $25 and the Lightning Pass is $33. The Blood Prison crew has gone out of their way to give you the most bang for your buck, filling every nook and cranny with entertainment’inside and out. We would definitely recommend this haunt! 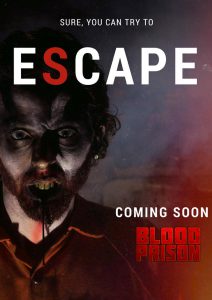 Abby – 10/10 – October 9, 2021I had a great time art this Haunt. First, this building is amazing. The architecture is absolutely …show more gorgeous. Warden’s Widow is an impressive sight and great start. The haunt has lots of very dark, very scary hallways and a very creepy feel. The layout is huge, or at least feels that way as you wind up and down stairs and hallways. Set design was very good, with everything from prison yard, to graveyards, and so many gruesome and creepy things to see. All of the haunt actors were very engaging, especially with the touch pass, and I had a lot of fun interacting with them.

Most Captivating Site (Given by: Team Cleaverland)