Carnage is a brand new haunt that just opened up in Columbus, Ohio this season and as a first year haunt, they are on the right path to grow bigger and better in the years to come. We were greeted by a live DJ, Rocky Horror Picture Show being projected on the side of the building and, yes, even the Ghostbusters.

We were impressed with their debut season and, while they definitely have room to grow, they did not let us down on their promise of highly detailed scenes and fun. They even had a Horror themed Easter egg hunt that kept you on your toes as you traversed the winding halls and beautiful rooms of Carnage Haunted House.

The cast felt a bit sparse throughout the attraction, but the ones that you do encounter confront you with believable characters, witty banter and some creative dialogue. One actress, as we waited to enter the haunt, seemed to drop character for a moment to explain to us that she was out of breath. Other than that, all the actors did a great job of staying in character and found some creative ways to garner scares from the group while interacting nicely with the gorgeous scenery and interesting props.

Carnage seems to take costuming very seriously, although we did spot one actor outside in a beautiful makeup with some bright white tennis shoes. The rest of the cast had some very nice looking costumes that were well distressed, paired with some gorgeous makeup effects and topped off with nice wigs. Nothing looked like an ‘out-of-the-bag’ costume but, there really weren’t any spectacular costumes either. With the exception of the doll character in the attic and the roaming hag outside, there weren’t any characters that really stood out to us. The few masks that we did see were very high quality and fit the actors nicely.

Carnage does not slack in the safety department and is the only haunt that we have seen this season that is TRULY handicapped accessible. They have several by-passes around sections that would not be possible for someone in a wheel chair to traverse and they do it without diminishing the experience for the patron. The parking, queue line and ticket booth setup felt a little awkward to us, but that was due more to where we parked than any fault of the haunt. We also think it is important to mention that there is limited free parking on-site and, once their lot fills up, you will have to pay to park at a building next door. The location of the port-o-potties outside of the exit also gives away the finale a bit. All of the staff were helpful, friendly and easy to spot in their staff shirts. Even the police officer that was working the haunt for the evening was wearing costume contacts and a skull face mask. There were a few actors entertaining the queue line and even treated the patrons to an impromptu dance party, thanks to the live DJ.

Even though Carnage is housed in an old warehouse building, with Rocky Horror Picture Show playing on the side of the building, the live DJ playing some great spooky hits and all the actors roaming around outside, it was pretty evident that you were at a haunted house. The entertainment outside was a good preparation for what we were about to experience once we entered through the front door.

From the taxidermist’s cabin to the brick hallways, the scenes at Carnage are immaculately detailed which helps immerse you in the experience. You can tell that they take pride in the amount of work that they put into each scene because they don’t hide it with dim lighting. Areas, such as the cabin, that you would expect to be well-lit in real life were and the lighting of each scene was used to enhance its beauty, not hide it. Sound effects were provided by both recorded soundtracks and the actors themselves, and didn’t leave any of the haunt unnecessarily quiet. We didn’t see much in the way of super creative special effects, however, in the Barber Shop scene (which was an ingenious addition) the actor with the scalped cranium, combined with the demonic barber holding a bleeding scalp was a pretty intense effect. We encountered a few mechanical props/effects whose timing was a bit off and either activated way too early or way too late for them to be effective on our group.

This haunt does not use a specific theme.

While the actors were pretty good at using distractions and popping up out of nowhere, most of their attention was directed straight to a small boy (around 5 years old) that was in our group. We even had a couple of actors walk completely past us to go right for the small boy. Others, would try to get a scare out of us and then quickly move to the boy when we didn’t jump. It was a little disappointing to us, as they have a lot of potential to be so much better than that, since we know the owner and the quality haunter that he has been for so many years. Hopefully, he can work with them in the off season and bring them up to speed.

Carnage is currently residing in a small portion of a warehouse building, with plans of buying and expanding into other areas of the building in the future. Our trip through took us just about 15 minutes and with a General Admission ticket price of $20, their Minutes Per Dollar value rating comes in at a 0.75 which is far below the average of 1.50. With that type of a rating, it is difficult for us to say that it is worth the money. But, seeing what they have accomplished in their inaugural season and knowing what they have planned for the future, we would definitely encourage you to stop by and check them out. 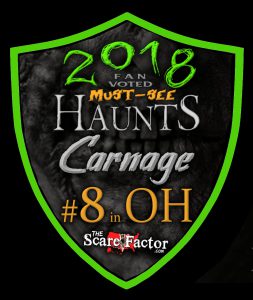 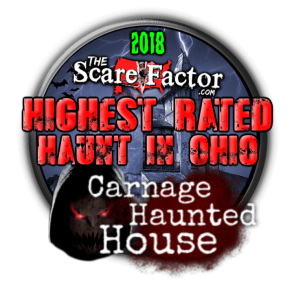 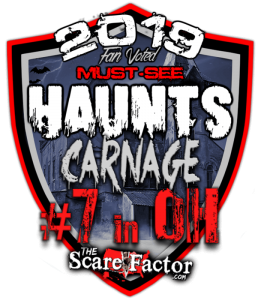 Robert – 10/10 – October 9, 2021This haunt contains some remnants from The House of Nightmares from Bangs, Ohio which was the best …show more haunted house ever. It then moved to The Brewery District. Now this is what remains and I highly recommend it.

Best Opening Scene (Given by: Team Teachers of Terror)

Best Bayou (Given by: Team Teachers of Terror)

Best Cemetery (Given by: Team Teachers of Terror)

Voodoo Priestess (Given by: Team Teachers of Terror)

Highest Rated Haunt in Ohio (Given by: )