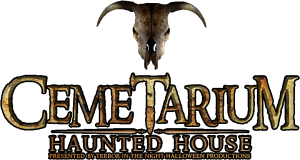 The casts of both Cemetarium and Zombie Heights were very believable and enthusiastic. The dialogue of Cemetarium was very humorous. Those actors were hillbilly cannibals who would often let us know that we, the guests, were invited to dinner. When we asked, ‘What’s for dinner?” one actress said, ‘You’re the dinner!’ An actor worth giving kudos was the hillbilly coffin salesman, pitching his coffins for sale in a proud and boastful manner. He offered adult coffins, child coffins, dismembered body part coffins, and any type of coffins we needed. His humorous banter was the most memorable performance of Cemetarium. There was no dialogue in Zombie Heights, because the actors were all zombies. Each of the different actors had their own take on what kind of noises a zombie would make, because some growled, some moaned, and one even snorted. The movement of the zombies was straight out of AMC’s The Walking Dead. Kudos to the first zombie girl we encountered at the start, and the last zombie girl at the ending, because their intensity was the most memorable. The performances of Cemetarium were humorous and engaging, but the performances of Zombie heights were intense and aggressive. Every actor fulfilled their role throughout both haunts.

The only sound effect that really stood out was the music playing at various parts of Zombie Heights. It was an instrumental heavy metal song that sounded like the soundtrack to an action movie. We did see an animatronic not functioning in Cemetarium that looked like it was supposed to lunge out at us, but there was a human head bobing up and down in a cooking pot. This haunted house is very ‘Old School,’ and doesn’t utilize high-tech special effects. Cemetarium’s scenery successfully conveyed a rural hillbilly community, with the fa��ade of a house with a front porch, a living room, kitchen and numerous hallways; each are well detailed. Mind you, that this is still an outdoor haunt and all of the scenery is outside, but it works! The scenery of Zombie Heights shows abandoned and demolished building structures and cars. Walking through Zombie Heights made us feel like we entered scenes from The Walking Dead. Lighting was used in a subtle manner to naturally light every scene.

Cemetarium Haunted House took a total time of 18:02 minutes to walk through. 13:26 minutes of that time came from the individual Cemetarium haunt, which for us is the longest time spent in a single haunt maze. At a General Admission price of $22 for two haunts, that calculates to 0.82 minutes per dollar, which is very good value. The General Admission price for all three haunts is $32, but since Psycho Circus was closed, we couldn’t fairly calculate the value of all three haunts. Cemetarium Haunted House effectively uses all available space and there are no ‘dead spots’ that need to be filled.

Nat Milburn – 9/10 – October 21, 2017Wow, I’ve done haunts all over northern and southern California but this place is huge. It’s got …show more Cemetarium that’s 15,000 sq feet zombie heights 14500 feet and psycho circus is about 5000 feet. Plenty of actors and there’s even a low scare option. After seeing a lot of black walls at other haunts this place has great detailed sets inside. Don’t judge a book by its cover because once u go inside your transported into another world. Great job guys