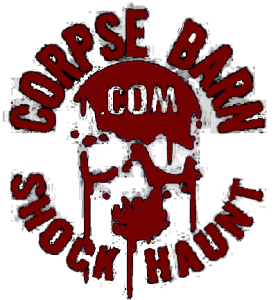 Located just minutes from Jackson, Michigan, the Corpse Barn Shock Haunt has been providing eager haunt goers with their unique high-intensity frights for the last seven years running. You won’t see elaborately detailed sets or high-end animatronics here. Instead, what you will get is a large mob of bat-shit crazy actors in an authentic, gritty environment, ala Texas Chainsaw Massacre or Wrong Turn. This actor-driven haunt excels at giving patrons a plethora of in-your-face frights, better than just about anyone in the State. If you seek attractions that are a little more unnerving than your average haunt, then make sure you plan accordingly, you won’t wanna miss this one. But for those who are a little more timid in nature, well you have been warned!

We’ll say one thing about the actors at the Corpse Barn, they sure know how to scare the crap out of their customers, that much is for certain! We never heard so much screaming/yelling from other groups going through as we did during the night of our visit. We found the cast to be a very energetic and an absolutely relentless bunch. We didn’t come across a single actor who broke character, even when we tried to throw them off of their game by speaking to them. While we would have liked to see a little more interactivity and meaningful dialogue, we felt that each member of the cast fulfilled their role admirably. The entire cast was quite believable, working well with their respective scenes. We never did find out just how many actors there was that night, but it sure seemed like a very large number. There were multiple scenes that contained 3, 4, and even 5 characters at a time. The cast at the Corpse Barn deserves to be applauded and finished in a virtual tie with Fright Effect as the highest rated category in this review.

The characters at the Corpse Barn seemed to have a similar murderous, inbred hillbilly look to them. The makeup applications were quite simplistic, and the costumes themselves pretty basic. We noticed several actors in normal street clothes and an overabundance of masks. While the masks certainly weren’t high-end, they were at least effective for the most part and we did see quite a few unique ones. We feel if the Corpse Barn could give more attention and effort to the costuming, it would go a long way in helping take this attraction to the next level.

The Corpse Barn is a little off the beaten path. It is located in an old farm setting and as the name suggests the haunt itself is located in a large barn. GPS got us to the entrance where there was a flashing sign letting us know we were in the right place. We needed to follow other signs closely after that as the haunt can’t be seen from the main road. It was raining when we got there and unfortunately we got very wet while waiting in line to purchase our tickets. An awning over the ticket booth would have been greatly appreciating. After purchasing our tickets we were given a number and were given an approximate wait time. While waiting for our number to be called, an actor would pop his head out of a barn window up on the second floor and yell down to the patrons. Once our number was called we proceeded to what we felt was one of the most original queue line concepts in recent memory. Actually, it was not a line at all, but a series of different rooms in which your group waits alone until the next door opens and you move on to the next room. Each room had its own unique look and sometimes an actor would pop out to startle or interact with us.

The huge barn itself was pretty imposing looking with its natural facade and old weather look, but we still felt like there were a lot of missed opportunities atmosphere wise, as we didn’t hear any music playing or see very much in the way of typical haunt decor/lighting outside of the attraction. The highly original “queue line” mentioned earlier made the wait more entertaining and did help prepare us for the journey that lay ahead.

You won’t see elaborate sets or expensive animatronics at the Corpse Barn. In fact, we’d say the level of eye candy here is kinda on the low side. But this haunt doesn’t need those kinda high-end features, in fact, they would be almost out of place. The majority of the sets had a similarly gritty, bloody, and authentic look to them. We feel the best way to describe the look and feel of Corpse Barn would be to say that it was like stumbling upon a maniacal hillbilly families’ lair of horrors.
The sound effects were both effective at setting the mood and giving us a good jolt of fright. They were utilized in nearly every scene and for the most part were appropriate for their respective sets. While we didn’t hear much in the way of a soundtrack, we did hear lots of loud terrifying noises that included; crashing sounds, lots of banging, dogs growling, and ear piercing horns. The lighting had a fairly consistent dim but warm glow to it, though on occasion a little too dim to properly see the details of the room.

Let us start by saying that the Corpse Barn may just well be the “scariest” haunt in Michigan. It is quite a visceral experience, to say the least. We experienced a wide array of effective scare techniques, but none were more effective at scaring the pants off of us quite like the distraction and misdirection scare tactics utilized here. The Corpse Barn’s ability at getting the customer out of their comfort zone was masterfully executed. For at least half of our tour, time, we had the feeling of being hopelessly lost. Countless times we found ourselves saying, “Where the Hell are we?!” and “Ok, how on earth do we get outta here?” We won’t go into details, as we don’t want to spoil it for the reader, but let’s just say often times the path that appeared to be the right way to go, wasn’t, and what we thought were safe passageways…well, we’ll let you find out for yourselves. We feel one of the most effective scare techniques used in the industry is distraction scares and believe us when we tell you that the Corpse Barn has this technique down to a science. Countless times something would get our attention and then “bam!” something would scare us from another direction unexpectedly. They really got us good multiple times using this technique. In one particular scene alone we counted 4
different effective scares of this type that were all performed with terrifying precision by the actors.

The only area we would say could use improvement was the finale, as it was a little lacking in the originality department as we’ve seen similar countless times. But even so, it was still enjoyable.

So if you’re looking for something much scarier than your average haunt, an attraction that will truly get your heart racing, look no further than the Corpse Barn Shock Haunt!

General admission is priced very reasonably at $15, but the cost for a Speed Pass is a hefty $35…over twice the cost of general admission, which we find to be a little puzzling. From start to finish it took our review group a total of 19 minutes to complete our tour, for a MPD (minute per dollar) score of 1.27. We felt that they did an excellent job of using the available space, as the tour time was longer than other haunts of similar size. The Corpse Barn is priced lower than other haunts of similar quality and length, which provides the customer with an excellent value. $15 for 19 minutes of total visceral mayhem is a great deal in our book! We look forward to future visits to this one-of-a-kind haunt!

Crystal – 1/10 – October 21, 2017Went with a group of friends and owner in parking lot was rude. Had a larger group. We all paid but …show more then when we went into ticket room was told some people didn’t pay so had to double pay. The owner and the ticket room person seemed like they didn’t even want to be there. Will not go back.

Scariest Haunt in Michigan (Given by: )