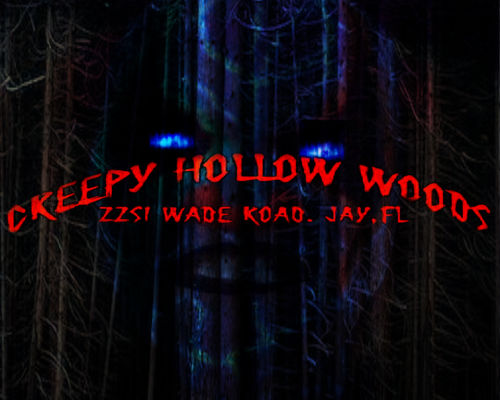 CREEPY HOLLOW WOODS is a trail haunt through the woods in Jay, FL. On select nights, they feature a flashlight night, where lights are off and only a flashlight guides guests through the haunt. On regular nights, there is an option to have an ‘insanity’ experience, where guests don a hospital gown and opt to be fully interacted with, including physical contact, interaction and moments of being held back within the haunt for extended periods of time. Of course there is also an option to experience the haunt as a standard walkthrough as well.

Team Giraffic Shark visited CREEPY HOLLOW WOODS on one of their busiest nights ever, which caused some unique challenges for the operation of the haunt. A much higher percentage of guests opted for the insanity experience (a small $5 upcharge) and, due to the number of insanity guests that the haunt can host at one time, it caused a bit of over-saturation, causing the experience to lag, suffer and become quite the wrong type of ‘insanity.”

Much of the team’s experience and feedback has already been shared with the folks at CREEPY HOLLOW WOODS, with changes and updates having already been made as well as brainstorming for process improvement, nearly guaranteeing a better experience than our team had for future guests. Preparations have been made for high volumes of ‘insanity’ guests in the future, including more hospital gowns, a separate queue and cast coaching to streamline the experience.

For the ‘insanity’ experience, Cast has minimal limits and has nearly free reign to touch, including but not limited to grabbing, pulling, shoving and pushing through the haunt. While sometimes effective, the mostly young cast suffers from lack of spatial awareness and controlled force upon the Guests. The team nearly came in contact with props as the Cast lacked the spatial awareness to safely use these in close proximity to Guests’ faces. Similarly, hats and masks frequently came in contact with faces, ruining the illusion of character. Proper training should be required for any interactive weapon stunts, especially for young Cast members.

Due to the high number of ‘insanity’ victims, the rooms often got backed up as the Cast waited for the next rooms to clear and became frustrated that they had to hold these Guests for longer than normal. The team frequently encountered actors saying things such as ‘I don’t know why they sent you already, I’m not ready for you’ or ‘Come back here, the next room isn’t ready for you yet,’ destroying any illusion of character. The Cast had no ability to stall with themed dialogue or interaction and fumbled trying to manage the operation of the haunt’s Guest flow along with the performance they were supposed to deliver. The story ended up being pushed aside in order to get Guests from point A to B. At another point, a team member, while laying in a casket for an extended amount of time, heard another Cast member enter the scene and say ‘We’re having audio issues.’ Fortunately, the actor in that scene suggested they leave the scene to discuss it.

For an interactive haunt, the Cast seemed to lack the skill to provide quality interactions and the improvisational acting necessary to deliver the story and effectively carry on dialogue with Guests. Frequently, when our team would respond back in dialogue with the Cast, it would cause actors to break character and not know how to respond. In the asylum room, a conglomeration of teenage girls seemed to be seeing what they could get away with, so when a member of the team followed their direction and bit a (dirty and gross) prop, the girls ran off and giggled discussing ‘I can’t believe he actually bit it,’ again tarnishing the experience and believability of the characters as a whole.

Due to the large amount of ‘insanity’ customers, the lady at the front of the queue had a challenging time grouping standard Guests with an appropriate amount of ‘insanity’ Guests. After our team suggested that a separate queue would greatly boost this efficiency, they built and implemented one to try to alleviate this frustration for future weeks.

While there are allegedly Cast stationed throughout the blackout maze, a lot of Guests were panicking, freaking out and not enjoying their trip through the maze. At the end of a frustrating experience, it makes for a less than optimal ending to the haunt, traversing pitch-black hallways with screaming children and teenagers. Blood frequently comes in contact with ‘insanity’ guests, including bloody hand holding and a syringe squirt of blood, often carelessly splashing onto faces as well.

Unfortunately, CREEPY HOLLOW WOODS’ ‘insanity’ experience lost a majority of its scare factor to the clumsy interactions and Guest flow issues. The best scares were driven by the special effects that did not rely on Cast to trigger them. The Cast was so completely overwhelmed with trying to keep Guests efficiently moving through the haunt that a good amount of them gave up on their scaring to work on getting Guests through, or were focusing so heavily on the ‘insanity’ Guests through intense interaction as opposed to scary elements. Some effects, however, weren’t triggered properly due to timing through the haunt and, when effects didn’t work, the Cast had no contingency plan for interaction or backup dialogue in place for delays.

While a reasonable charge for the standard experience, ‘insanity’ is only 5 dollars more, a minimal upcharge, causing a great amount of people to choose it. If it were a larger fee, it may deter a portion of people from upgrading to ‘insanity,’ and increasing the experience for those who do choose that option.

If you happen to be close by or within a short drive, head on down to CREEPY HOLLOW WOODS in Jay, FL. If lines are long and everyone in sight is wearing a hospital gown (indicating insanity experience), opt for the standard experience as wait times will be long and, until they figure out how to increase capacity for ‘insanity’ guests, the experience is likely to be much like rush hour traffic.

Heather Christofferson – 10/10 – October 2, 2021Amazing,and best scare tactics I’ve encountered. It was a long arduous trek filled with everything I …show more love such as the best costumes,sound bites,actors,fear mazes,and all around scary entertainment that will make you heighten your senses.