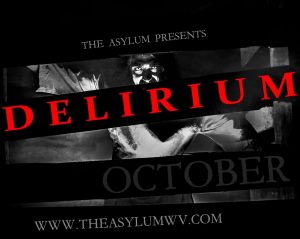 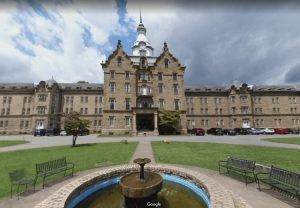 In the halls of what once was the area’s most rePutable hospital, a demented doctor has brought his Patients’ nightmares to life. SocietY’s undesirable souls have been abandoned in the dark recesses of this safe Haven. Their sole purpose is to serve the good doctor And his sadistic experiments. Scratching and cLawing their way through their new existence, patients succumb to deLirious visiOns before becoming one of the doctor’s creatures. Pushing the limitations of reality, Doctor Cerebus continues to seek immortality. Can you survive a journey into the Asylum, WhEre the vEil betweeN life and death has been lifted? 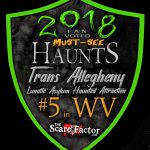 cast
9/10
the cast was great, they were all pretty intense and …show more scary for the most part. there’s somebody in at least every room (almost) there was an actor on a counter with long nails that had his leg over his head to distract us from the giant man on stilts that came out of nowhere, chasing the girl in the back of the line (this was also more effective because of the fast strobe lights) the actors use the theme and atmosphere to their advantage. example: there was re-accruing fog throughout the haunt, but the time when it was most affective was when burnt children were hiding underneath and would come out from every direction. overall the cast was great at acting completely out of their minds insane.

costuming
8/10
every actors costume ranged from functional, to great. the stilts man had the best costume out of all the cast. i couldn’t see very well because of the strobes, but what i did see was i’m pretty sure his head was a tv, and his clothing was all tore up and old looking.

atmosphere
10/10
they used a real mental institution for this haunt and boy did it work. you genuinely felt like you were going crazy with the patients at some point. there were many themes. patients had certain fears, and the whole haunt showed these fears. examples: clowns, dots, claustrophobia, dentists, children, sickness, religion, dolls, mannequins etc.

special effects
9/10
the props were greatly timed and huge. there was at least a three minute long section of walking through spider webs, with spiders coming out and moving. there was a section where there was fog and strobe lights with wooden palettes in a maze like formation, with children screaming worship him, which was a giant goblin prop that was actually pretty frightening. of course the strobe lights and fog were really good at some points. the lighting ranged from dim, seeable, and dark. there was a really bright orange light when we entered a room that shined in our eyes to where we couldn’t see what was coming ahead of us, so it was pretty shocking. we were walking through a dark hallway with fog and a little orange light bulb. an actor had a big tazer in the corner, while the other had a loud car horn in her hand, that made me scream and fall. an actor stopped us and told us she had a good surprise behind this glass window with a dead body on it. we thought something was gonna happen with the body but she pressed a button and a big spike that we couldn’t see slammed on the window. there were severed limbs, lots of blood, organs, and death. i remember a room with arms and legs in a bloody bucket hanging from a ceiling. severed heads, and ripped in half bodies. there was a bathroom scene with a man puking on a see through ‘mirror’

theme
10/10
the theme for this season was bedlam. a lot of the patients fears that ranged from scary to intense were shown in this haunt.

scare factor
7/10
this haunt was loud, intense, eerie, creepy, quickly paced, disorienting, nauseating, gory, and well themed. the things that got me the most in this haunt was the disorientation, and the loud noises. the car horn scene, and the ‘maze’ scene were the most intense moments. after you walk in you pass a woman at a receptionist standing and hiding her face mumbling, there’s two scenes after that and then you get to a room where there’s at least four actors (this is a very small room by the way) and there’s a wall in the middle that an actor can climb over and swat at you, which makes you flinch and wanna get out of the room faster just because of how intense it was. there’s a church scene where there are benches in a small room against the walls that extend to a very small gap in between them to walk. there are props on the benches that you’re looking at to see which ones real. they move really suddenly once everybody’s in the room, which surprisingly got me. there ends up being nobody on the benches, but there is an actor preaching satanic things. there were multiple moments where i could feel my heart racing, even after i just got out of a scene. there was a clown section towards the basement, where it was a short little 5 minute circus, that was very disorienting, trippy, colorful, loud and intense. this was after the spider section so i had high expectations, and it delivered with colorful neon barrels, and pink and black walls. purple strobe lights light up a twisting and turning long hallway with a floor that was moved in different directions at every point, left, right, hallway tilted, up and down. i swear one foot was higher than the other at one point, and mixed with the strobe lights and the fog, it was very dizzying. before we entered the hallway, clowns were popping out of barrels that looked like you couldn’t even hide behind them. the clowns were pretty intense and creepy too, that’s coming from someone who isn’t scared of clowns at all. right before the ending there was a long hallway of a light that would come on for a split second, and then go off for longer than it was on. i’m pretty sure i saw drums to my right and left that actors would hide behind and come out of whenever the light went out. the final scare thought could’ve been much bigger with adding some more actors. we walked outside and wooden pallettes surrounded us. after exiting the pallets, thinking it was over, we heard a very loud noise behind us. it was a chainsaw man chasing everyone back to the pavement.

summary~~~
this haunt has everything you need. gore, loud noises, intense scenes, great effects, disorienting rooms and lighting, and very great theming.
the only reason i would not recommend somebody going to this haunt is if you’re new to haunted houses, if you’re sensitive to flickering lights (there’s a lot of that) i wouldn’t recommend this. also please, don’t bring your children and then get mad at them when they get way too scared.
some of this haunt could use improvement though. i think the first half and the middle could use some improvement scare wise. this haunt could also add 5 or ten more minutes, it would be so much scarier that way. 7 is a good scare factor, that’s above average.

Caleb Nelson – 10/10 – September 28, 2018I love visiting the Trans Allegany Lunatic Asylum every year and it never disappoints. Every year …show more the Haunt is redesigned and just beautiful. The actors are very good and make sure to scare the whole group.


See anything that needs updated? Let Us Know!