Edge of Insanity is a charity home haunt on the outskirts of Kokomo, Indiana. When I say “charity”, I mean that every penny they make with the haunt goes to various charities across the city, state and country. They support charities such as Pals for Paws, Cops for Kids and Don’t Be A Monster as well as a memorial sponsorship in the name of the brother of the haunt’s owner, Walt Ingham. All upgrades and renovations on the haunt come out-of-pocket throughout the year; and we were fortunate enough to pay them a visit on opening night of their tenth season.

Edge of Insanity is staffed completely by volunteers and we were amazed to see and hear about their staff’s dedication to what they are doing. Their dedication was also evident in the performances they gave throughout the night. From the actors that roam the queue line and on through the asylum’s mental patients and the hillbillies out back, every actor was focused on their character. They all made great use of their respective scenes and only missed their timing a couple of times. If we had to pick a memorable character in each section of our visit; the male clown would take the queue line, Dollface would be for the asylum and “Jeb” would be our pick for the hillbillies. The interactivity and dialogue in most areas was fantastic, but there were a couple of times that an actor just kind of screamed at us.

The costumes are all well done. The haunt Mom, Tammy Ingham, is adamant about the costuming and there not being things out of place. The patients all looked like period-correct patients and the hillbillies were definitely hillbillies. In fact, we heard that one of the hillbillies does not wash their costume all season…for authenticity. It definitely smelled authentic. One particularly elegant costume was that of Dollface, a large man wearing a beautiful dress, with shards of glass protruding from his skull. There were, however, three characters that we were not entirely sure how they fit in. Two clowns and a guy in a gory rabbit mask made appearances in various spots. While they were cool characters, they just didn’t make sense to us.

If there was a soundtrack playing throughout the asylum, we can’t tell you. The intensity and volume level created by the actors inside drown out any semblance of a possible soundtrack…and that’s alright. We were walking through an old mental hospital, screaming patients is exactly what we would expect to hear. Out back, in Hell’s Half Acre, the only sounds you will hear are the ones nature provides and the persistent “threats” and ribbing from the hillbillies. Edge of Insanity also contains a vortex tunnel that was pretty effective and entertaining. It was fun to watch people starting to walk weird or tipping over, thanks to the tunnels giving their equilibrium a twist. They also have a custom built shock therapy scene that was very unique. It presented shock therapy in a way that we have not seen done before. You should definitely check it out!

There are basically two separate, but connected, themes going on at Edge of Insanity. The first is an asylum, where doctors perform ghastly experiments on patients, and patients (Patient 25 in particular) seek revenge. The second half of the haunt delves in the realm of hillbillies that have set up a homestead on the back half of the property. They squatted there, some time ago, and never left. The characters and décor throughout both sections tie in nicely to their surroundings. The only area of concern for us was the blacklight room and vortex tunnel areas. They seemed out of place, even knowing that they are meant to be your experience of one of the doctor’s psychotropic drugs. It is hard to read that, without something to give you that idea first. 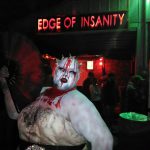 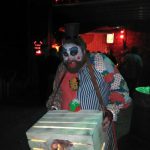 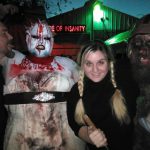