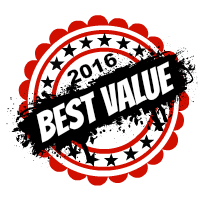 Jessica – 5/10 – October 21, 2018For the 25 we paid per person I’d have to say it was not worth it. Last year they were scarier. It …show more seemed the people were just not as into it or into making themselves scary. The zombie chainsaws at the end were the exception. I was seriously bummed. I was looking forward to a good scare and that didn’t really happen. I hope they amp it up in the future or I will be leaving this haunt out.

Most Minutes Per Dollar (Given by: Team Michigan Macabre)