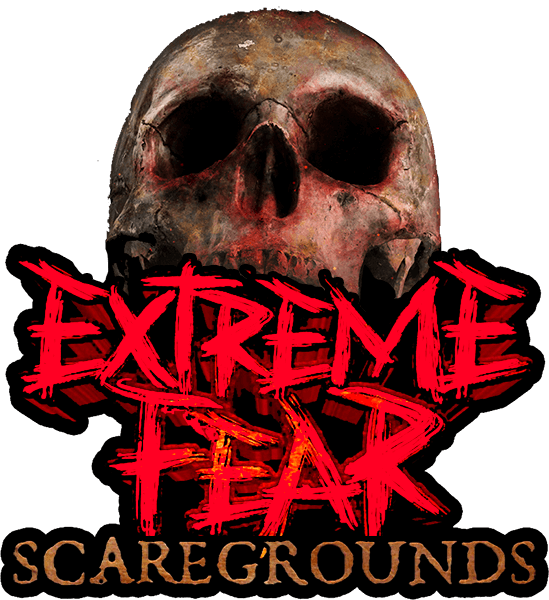 This attraction was reviewed on October 7, 2022 by Team Jefferson Starship.

A descent into the realms of madness await behind the doors of the Extreme Fear ScareGrounds!

We traveled out to the Extreme Fear Scaregrounds (EFS) on the Lenoir County Fairgrounds outside Kinston, North Carolina, and had a blast. Though this is only EFS’s second year, it has a dedicated team with a ton of experience behind it; that experience and talent shows through at this haunt. It should be noted that the weekend of our visit coincided with the local county fair – this does have an impact on the haunt. However, it’s not entirely negative. If families are looking for an evening out, visiting the fair and stopping to go through the haunt before heading home is a great option. On other nights, when the county fair isn’t running, expect the darkness and intensity of the denizens inside to amp up the scares. EFS has three internal sections – the Nixon Asylum, the Insanity maze, and Mayhem – a 3D clown-filled romp.

The cast during our visit to EFS were obviously throwing themselves full-body into their roles. While there is definitely a theme of insanity running through all three sections of the haunt, the actors did a great job of getting into their roles and tapping into the madness within. EFS also has a very well-done clown section. It was one of the better clown sections in a haunt we’ve seen so far this year, in fact. The clowns performed a variety of little tricks and jokes and contortions while we passed through the Mayhem of their rebellious circus that really amped up the level of interaction.

We were especially fond of several of the clowns – a comedian and an acrobat in particular – as well as a living doll, the pharmacist, and the head nurse: exquisite acting and character control.

Q3: How appropriate were the costumes for the respective scenes, themes? (20% of Costuming Score): 9

The costuming within EFS is very well done; everyone’s costuming and make-up placed them fully within their respective scenes and areas of the haunt. Though the themes of madness and rebellion were common across the three sections of the haunt, each section also had its own internal consistency as well.

Because the fair was running simultaneously, the light bleed from the very well-lit fairgrounds made the maze of Insanity a little less intense, but it let us get a good look at the costumes in this transition section between the two detailed haunts.

There weren’t really any queue actors during our visit – again, the fair was ongoing at the same time and that meant that the main waiting area was well-lit and populated by non-haunt-goers. Between each section of the haunt (Nixon Asylum to Insanity to Mayhem) there are subtle transitions made by an exit sign and a long walk to a black-light-lit yard that possibly would have benefited from a queue actor or two but worked well enough without them.

Extreme Fear Scaregrounds does a wonderful job with customer service, safety, and directions. GPS led us right into the parking lot of the fairgrounds and the main entrance funnels directly to the haunt itself. We would love to go back and see it all without the lights and glam of the fair in the background.

The staff of the haunt (and the fairgrounds) are clearly designated and are more than willing to take time to talk to guests, answer questions, and direct folks to where they want to go.

Q15: Were you completely, consistently immersed inside the attraction/s? (40% of Immersion Score): 7.5

All right, it’s time to gush a bit! EFS has spent some time planning and building for this haunt. It gets taken down each year only to be reassembled in the months before the haunt opens. Too, it had to weather a hurricane just a week ago. However, it all looks very complete. EFS presents a little storyline, delivered via video in the first room, that details how a doctor’s experiments, conducted against the grain of tradition, have gone awry. The rebellious effects of the experiments have led to madness and depravity. One nice touch was that the three costumed actors in the video all recognizably appear inside the haunt. The Asylum had enough space within each room to accommodate both actors and groups (including the very large group that went just ahead of us). Staff work to keep the groups spaced out, too. The space might increase wait times, but it also means that each group (and often each person in each group) gets attention from the creatures within. We were especially thrilled with the pharmacist in the Asylum who, in a sing-song little chant, appeared to tell us that she had “uppers and downers” and that she saw we had “inners” that she could make “outers.” Her charming delivery was a great bit of comedic horror that definitely left an impression.

Though the lights from the fairground diminished the impact of the Insanity maze, the sounds bleeding in from the fair only helped to heighten the terror (and fun) inside the Mayhem section. The sounds of the carnival equipment, rides, and screams of the guests would occasionally waft in as background roar in Mayhem which only added to its realism.

Our biggest desire is to see EFS grow. They’ve obviously got a talented team that pays attention to a lot of details and some of their cast are very very enthusiastic (and very limber!). With time and lots of visits from guests, we can only hope that EFS continues to grow.

Parts of the scenes within EFS were very well-detailed, showing a level of care and attention that we love to see.

There are areas that are sparse and dimly lit, allowing the imagination of guests to fill in the background details and build up suspense before the next actor pops out of nowhere. Of particular note, we’d like to point out that it is nearly impossible to tell the difference between some of the static clown props and the actual costumed actors within Mayhem. The uncertainty of who might move with a cackling lunge and what might remain frozen in place was a great tension builder and wonderfully executed.

We had a blast at EFS. From screams to laughter and a growing sense of nervousness, EFS brings guests into the insanity trapped behind its doors. While some of the scares are just repetitive jump-scares, some other well-done pieces of entertainment kept us on our toes, waiting for the next scream, evil laugh or looming terror to pop out.

EFS is reasonably priced and offers a fast pass option for folks who want to immediately jump into the terror. As previously stated, guests attending on a night that the fair is open will find more outside the haunt to do, but the lights and sounds of the fair do have an impact on the haunt itself. Parking is free, but 3D glasses for the added ‘effect’ in Mayhem do cost an extra $2, but they’re not needed to enjoy the section.

The haunt also runs a variety of promotions – like a scare-free trick-or-treat afternoon and a black out/lights out night. The first section of the haunt is easily handicapped accessible; the second two sections would be navigable by someone with mobility issues, but the softer ground might present some difficulties. We feel confident in recommending EFS to anyone looking for some well done madness. 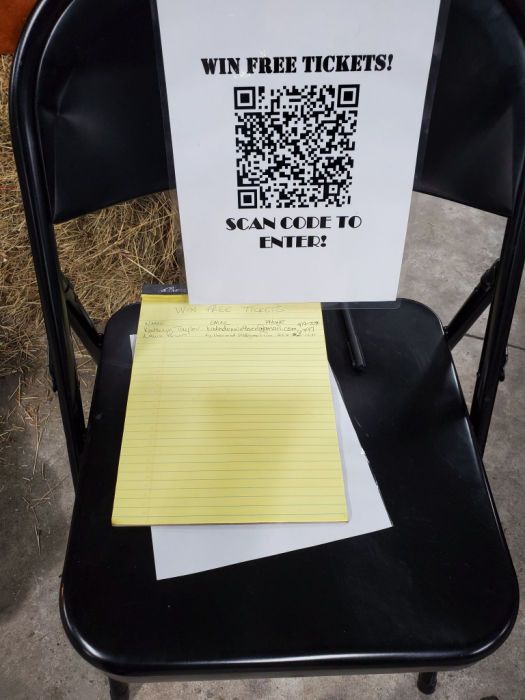 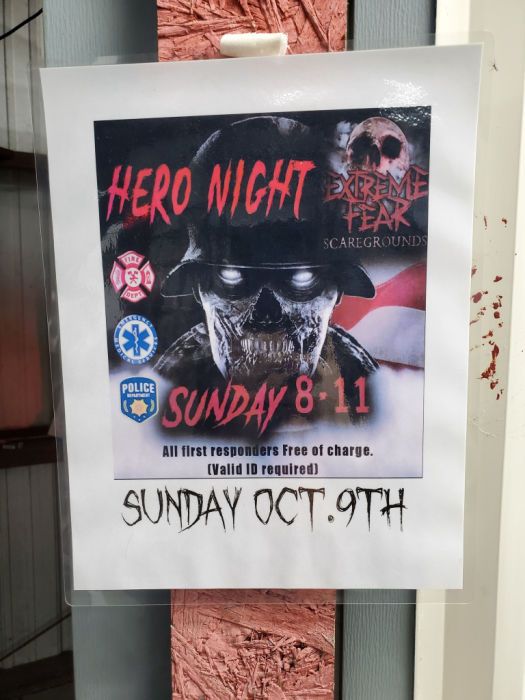 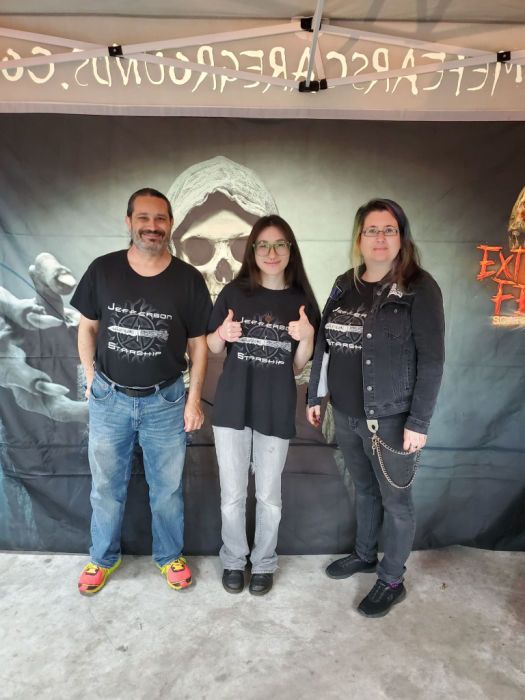 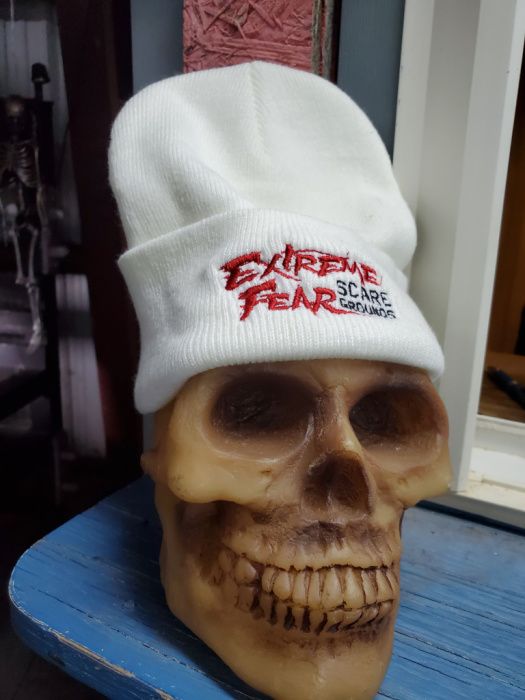 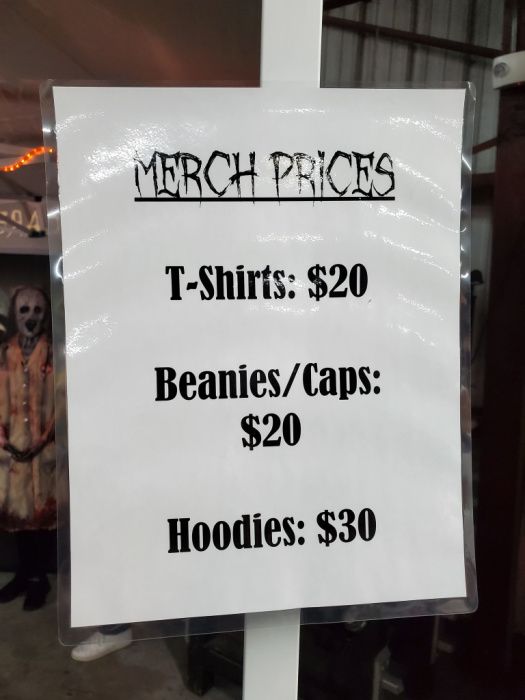 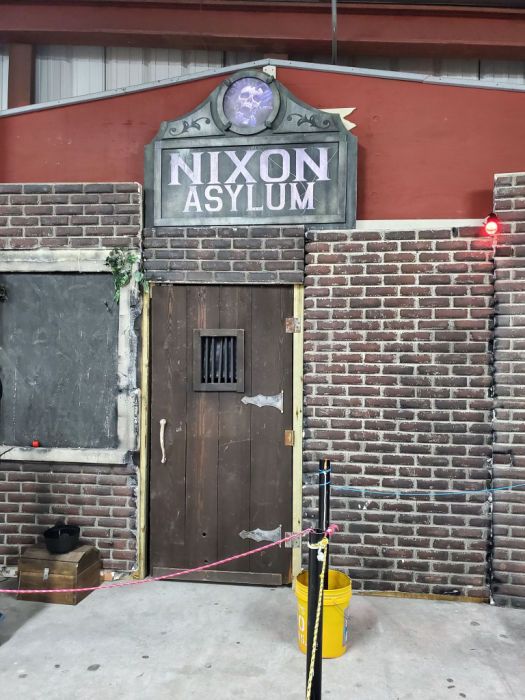 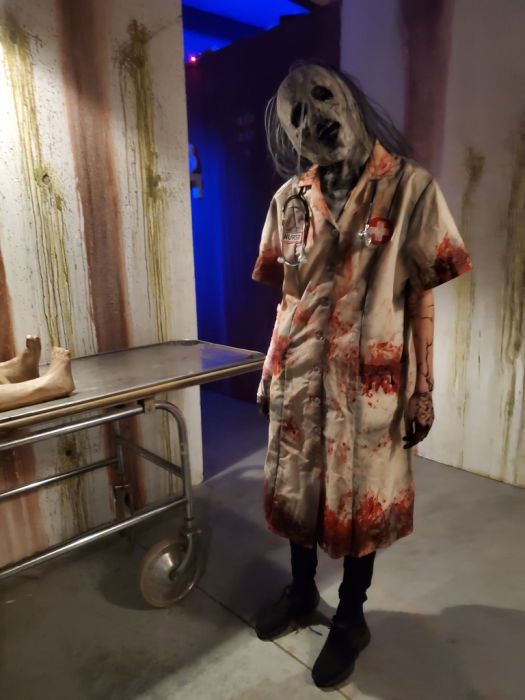 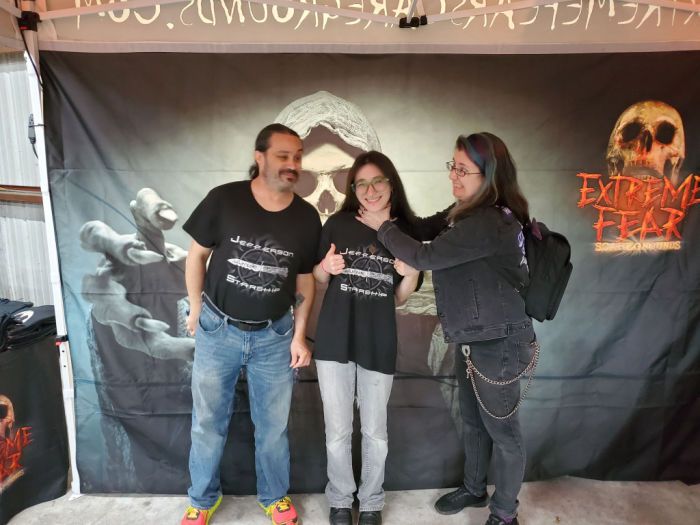 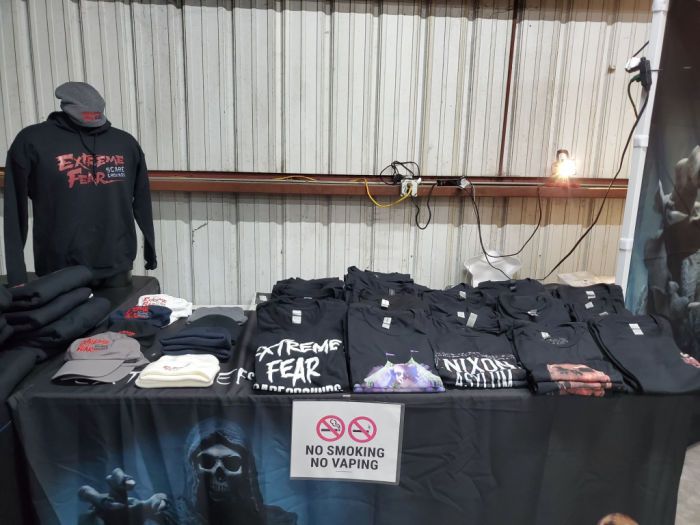 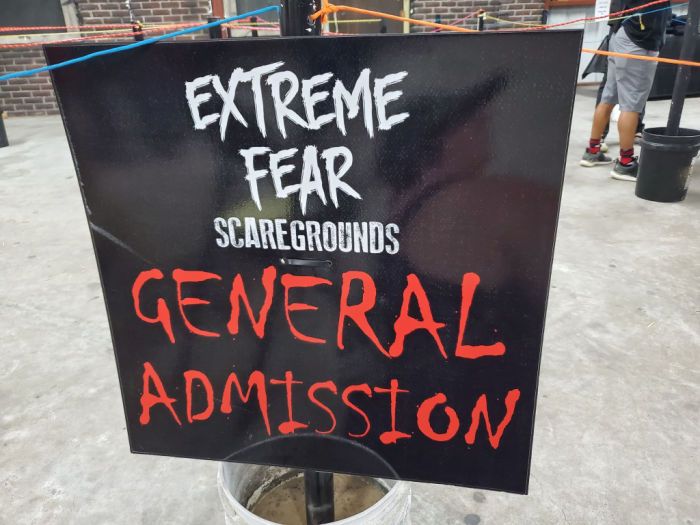 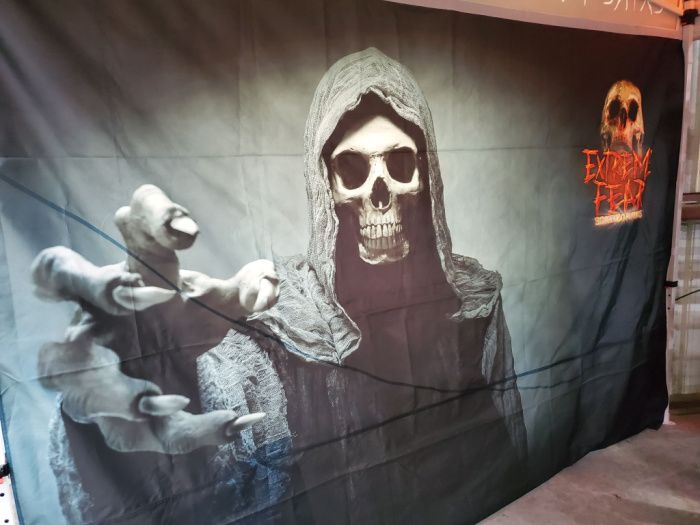 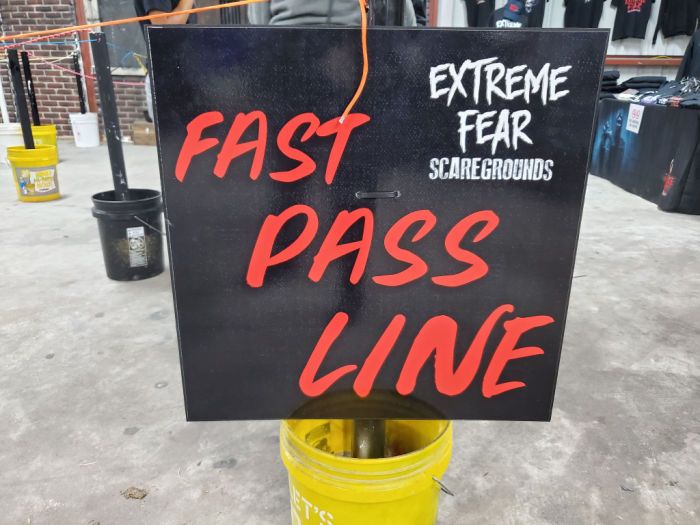 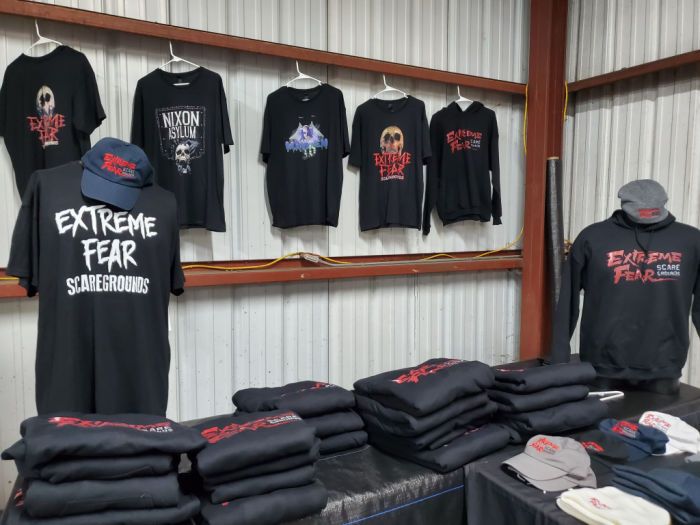 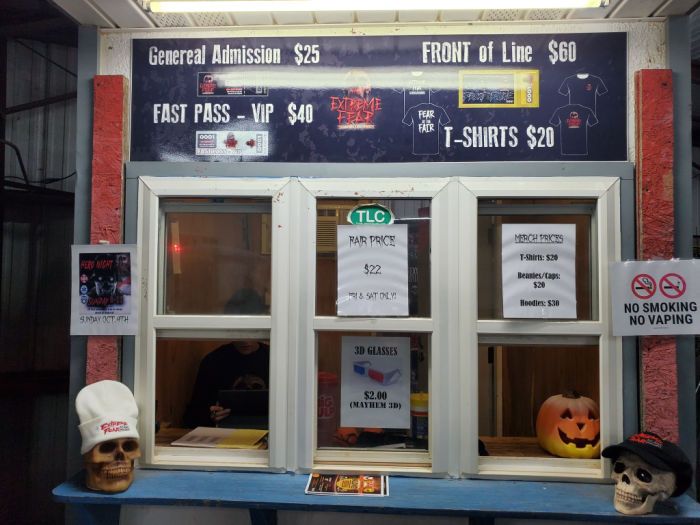