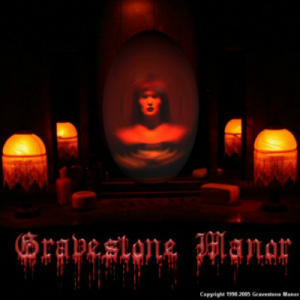 For years I have been hearing about how unique and different Gravestone Manor in Plains, Pennsylvania is. This is probably the fourth year in a row I have made plans to visit. Finally, I was able to squeeze Gravestone into my schedule and now I’m beating myself up for not going sooner. Gravestone Manor is less of a monster-jump out-scare haunt and more of an interactive story. They change the story every year so you can keep coming back. The whole production is a charitable event donating all proceeds to the United Way of Wyoming Valley. After finally going through I can say with confidence that Gravestone Manor is one of the most unique and genuine attractions out there.

All cast members and staff are complete volunteer positions and it blows my mind to think about that. Especially when I can come out of another haunted attraction questioning why they paid their actors to stand in a corner and scream. I can also come out of Gravestone Manor and question why they don’t pay their actors to memorize an entire dialogue and repeat it multiple times a night. The love, support and family they gain out of working for Gravestone must be worth it. Plus almost all the cast members are from the local theater groups and high schools. I loved the enthusiasm from all of them that made it seem like they really do live for the showmanship. Never did I expect to encounter such a dedicated performance from each actor inside the great Manor.

I would have liked to see more passion put into the costuming and makeup choices myself. Throughout the performance we were getting closer and closer to the leading antagonist which we are constantly reminded of from other characters in the story. We are also told he is a doctor. So when a scene came up that had a crazy looking doctor I naturally assumed that was the man the story keeps bringing up. Then when it happened again I was almost positive it was, but the character ended up being a gentleman in a suit. A car crash victim had little more than a dribble of blood running down her chin. Some werewolf minions looked nothing like werewolves. I was however impressed with the costumes of most the other characters. The show they put on was not damaged because of the lack of high quality makeup and wardrobe.

We arrived about half an hour early but there were plenty of people around to help us with anything we needed. The building that Gravestone Manor is in is a working warehouse owned by Trion Industries. They gave Gravestone Manor 7,000 square feet of space to do their event free of charge. They do have sandwich board signs out on the road and a light pointing at their banner, but the street view is tough. The driveway is a sharp turn uphill but nothing we couldn’t handle. The thing I loved about Gravestone is their waiting area. Instead of being huddled in a line for an extended period of time you get to sit in chairs and watch a few short horror sketches made by random groups all over the world. At first I thought this was part of the show but then I realized it was the actual waiting line. One by one they call up your entire row to be the next group in. The crew was always very friendly and happy to answer all questions.

Another great thing about the movie theater style waiting area is it tends to keep people quiet to watch the movies. The sense of staying focused in the story carries over into the haunt. The noise that is usually heard from the chatter in the waiting line is almost non-existent. Most rooms, if not all, had their own sound source. so music was playing in each of their scenes. Sometimes it would overpower the dialogue but set the tone of the room very well. One of the best scenes this year was the car crash site complete with broken branches and leaves and a real car. This year they had a very special ending scene but something tells me every year something special is in store for you.

Gravestone Manor has its fair share of effects but what makes them memorable is the way they are incorporated into the story line. A possessed girl does not simply levitate off the ground as you walk by. Your guide will play with future telling tarot cards predicting the girl to rise from the ground. A once empty coffin will suddenly inflate from within and become a scream lost soul warning you of the doom that is ahead. Too many times I have gone into other attractions and the effects were taken for granted. Gravestone is hitting the ball out of the park when it comes to knowing how to make an effect effective!

If there was ever a haunted attraction that deserved an award just based on theme Gravestone would be the one. This year we follow a detective who has been assigned to investigate a car crash and the missing driver. Just so happens that the car crash happened right in front of an abandoned manor with a dark mystery inside. The detective also happens to be one of the most ambiguous historians of the manor and that is why they took this case. A series of unfortunate events leads you into the manor. Through the haunt you encounter victims and deranged accomplices to the one mad doctor you will eventually meet before the night is through. Each scene gets more and more gruesome the deeper you get chased into the manor. The story bumps into new characters on the way, some friend, mostly foe. Not once does your experience stray away from the story at hand.

Gravestone Manor works incredibly hard to give you a great show. All of the cast and crew are dedicated to entertaining you. While other haunted houses await their moment to bash a wall or scream in your ear, Gravestone spends a great deal of time pulling you into the story and keeping you there. There are actors who will crawl up next to you and startle you, or get in your face and laugh or howl. If it wasn’t for the structure of the storyline these efforts of fright wouldn’t be very successful.

Tickets are only $10 at the door for a fifteen minute show. It will be extremely hard to find another haunt that sucks you into a story with quality actors like this for only $10 anywhere else. Not to mention the proceeds go directly towards benefitting the whole community. The waiting area gives you a chance to see some great works of art from all over the world that you may have never heard of or ever would have. For a place that is claimed to change every year this is the cheapest price you will probably ever find for such dedicated entertainment.