Crawl Inside the Mind of the Demented Genius behind Wisconsin Fear Grounds! In 2017 Wisconsin Fear Grounds celebrates its’ 14th season in the horror business, consistently rated one of the Top Haunts in America by Haunted Attraction Magazine, and the secret formula to its’ success is known only to the husband and wife team of Tim and Ann Marie Gavinski. We recently had the opportunity to sit down with Tim Gavinski in order to peek inside his grinning skull and pick his oozing brain.

Gavinski admits to two primary influences that shaped his life in his formative years: His devout Catholic upbringing and the sometimes tough financial times his family experienced during his childhood.

“I grew up in the Catholic Church, and we had a nun in the family,” says Gavinski. “When I was 15 years old she asked me, ‘What are you going to be when you grow up?’, and my answer at that point was that I wanted to be a priest.”

“Then when I turned 16, I went to a party where I met a girl and by the end of the night we were smackin’—and I liked it! I liked it a lot, so it looked like the priesthood was out for me.”

“The two holidays that the Catholic Church more or less created in America were St. Patrick’s Day and Halloween, so I got interested in Halloween pretty early,” Gavinski explains. “My first memory of really being scared was while watching ‘The Creature from the Black Lagoon’ on the Dr. Cadaverino show on Nightmare Theater.” Nightmare Theater was a locally programmed series of classic horror movies hosted by the infamous Dr. Cadaverino on Channel 6 in Milwaukee from 1964 to 1977. “My brothers and I would get some root beer soda and popcorn, sit in our bunk beds and watch Dr. Cadaverino on Saturday nights. That show scared the bejeezus out of me.” “We were pretty poor,” Gavinski continues, “so there was no way I was getting candy on a regular basis outside of Halloween night. Halloween meant you could go out and get as much candy as you could carry and smart kids could collect enough to stretch that candy thing out for a long time.”

“Back at that time, I got a $5 a week allowance and taking a girl out on a date cost about $12.50, so it took a while to save up that much money,” confesses Gavinski. “That’s when I discovered the St. Francis Jaycees Haunted House. Admission was $1.25, so for $2.50 I could take a girl on a date and she’d be holding on to me tight before we even left the house. It was great.”

It was years later while serving in the military that Gavinski had another transformative experience on Halloween. “After graduation I joined the military and lived in Europe for six years.” Burg Frankenstein, which sits on a hilltop overlooking the city of Darmstadt, Germany, is thought to have been Mary Shelley’s primary influence when she wrote “Frankenstein” in 1818. The castle is home to many local legends and myths, and at one point was also home to an alchemist named Johann Conrad Dippel. Dippel was rumored to have conducted medical experiments on dead bodies whose graves he had dug up and has long thought to have been Shelley’s inspiration for Victor Frankenstein.

Gavinski’s Halloween night spent in Castle Frankenstein has driven him on another lifelong Halloween mission, a ‘bucket list’ goal that he intends to fulfill sooner rather than later. “I want to spend the night in Dracula’s Castle. The problem is that Bran Castle in Romania is only open for sleepovers from August through October 31st and I’m always busy with the haunt during that time.”

At this point Gavinski makes a shocking confession to me: “I’m going to be done with this within three years.” Tim Gavinski plans to retire from the haunt business in three years. He couldn’t tell me what that actually meant for the future of Wisconsin Fear Grounds, which has become one of the most financially successful haunted attractions in America over the last decade and a half, but he confessed to being deadly serious as far as stepping away personally from the business.

If you plan on experiencing Wisconsin Fear Grounds in its original conceptual form, perhaps this year would be the time to do so. You’ll find three full scale haunted attractions on site including the original haunt, Morgan Manor, a 10.000 square foot Gothic mansion. Unstable is their outdoor attraction which takes guests through the main house’s stables and the woods surrounding them. Twisted is a new attraction just unleashed last year that challenges guests’ perception of illusion and reality. 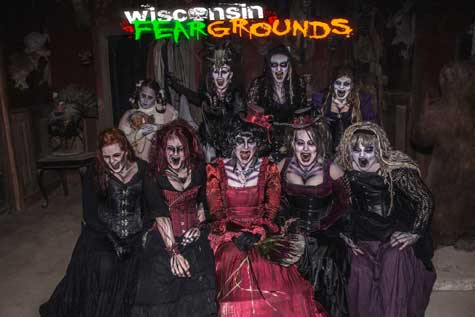 What is Gavinski’s advice to other haunters looking to maximize customer satisfaction and ticket sales? “Millennials are the target audience and they don’t have the patience that kids in past generations had. Cellphones and the Internet are basically the anti-Christ and they’ve created a whole generation that wants convenience and instant gratification.”

“That’s why it’s important that the experience starts as soon as they get out of their car in the parking lot,” he adds. “They don’t want to wait for the entertainment to start. Also, price doesn’t seem to matter to them as much as convenience; anything that makes the experience easier and faster.”

Have you visited Wisconsin Fear Grounds yet? Tell us about it in the comments below!