This article, “Goatman: Flesh or Folklore?” has been shared from Louisville Halloween’s Phantom Gazette.

The legend of the Pope Lick Goatman, known both regionally and nationally as The Pope Lick Monster, has been passed down through several generations of Louisvillians. Guarding the rusted train trestle between Jeffersontown and Fisherville, the Goatman has been the subject of campfire tales, theatrical plays and short films over the last half century as well as the suspected culprit in numerous confirmed deaths in the area dating back to the late 70’s/early 80’s, including one as recent as 2016.

The half-man/half-goat creature’s origins are as murky and mysterious as the beast itself. There are several different stories floating through the mists of Louisville legend that explain the Goatman’s creation and connection with the railroad trestle that runs through Pope Lick Park. One such tale involves the derailment of a circus train in which the Goatman was the star attraction of the midway’s Freak Show. Another postulates that Goatman is the demonic result of a satanic magic ritual performed by a local farmer upon one of his livestock. Some stories attribute supernatural hypnotic powers to the creature while others depict him as an axe-wielding savage intent on dismembering anyone who crosses beneath his trestle after midnight on the night of a full moon. There’s even a haunted attraction, The Legend at Pope Lick, which debuted on Danger Run during the Halloween season of 2016 and is scheduled to open again for Halloween 2017 that takes place in Pope Lick Park and challenges guests to discover the truth behind these stories by trespassing beneath Goatman’s sacred trestle and facing the legend itself.

Author and folklorist, J. Nathan Couch, knows the story of Goatman better than anybody and has visited the Pope Lick trestle on a tour across America’s heartland for his book, “Goatman: Flesh or Folklore?,” the only book ever published that attempts to research all the different Goatman sightings and legends across the nation and tie the myths together in search of the truth.

“I grew up in the foothills of the Blue Hill Mountain in Northeast Georgia,” says Couch, “where my parents regularly talked about ghosts and curses around the dinner table.”

“It’s a place known for the birth of the Cabbage Patch dolls and absolutely nothing else,” he jokes.

Clearly influenced by the dreamy rural community amid the Appalachian Mountains and the many tall tales and superstitions that flourished in the area, Couch has spent much of his adult life researching ghosts, folklore and cryptozoological creatures lurking on the edges of our civilized world.

“The first time I heard about Goatman was after moving to Washington County, Wisconsin,” says Couch. “There’s a story I heard here that dates back to the Civil War, maybe right after the Civil War between 1865 and 1867, that involves a war vet and his new bride being attacked by a Goatman while traveling along a desolate road in Washington County.”

Perhaps the first Goatman sighting in American history, Couch speculates that this Civil War era story might be the origin of a much broader urban legend. “The one unifying element of Goatman stories across the country is that they often take place in a Lover’s Lane type of location. This particular story has a lot in common with the campfire ‘Hookman’ and ‘Hanging Man’ stories that many of us may have heard growing up.”

“Almost all Goatman stories also take place on the edges of rural suburbia,” says Couch. “Unlike Bigfoot or the Loch Ness Monster sightings that take place in deep wooded areas or remote lakes, Goatman tends to live on the fringes of suburbia.”

“Perhaps the most unique thing about Goatman, unlike most other cryptids outside of Mothman, is that he is actually linked to the cause of real deaths.” 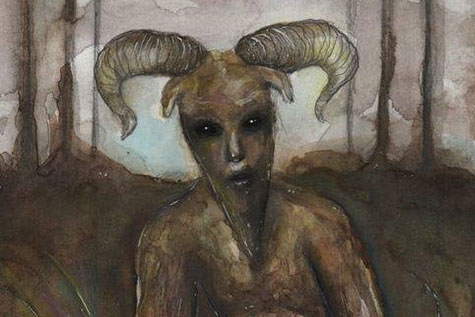 According to Couch’s research, The Pope Lick Monster is only one of a brood of satyr-like beasts roaming the woodlands of America, the most famous of which might be the axe-wielding Goatman of Maryland. Others include California’s Beast of Billiwhack, Pennsylvania’s Sheepman and the infamous Sheepsquatch of West Virginia.

“Texas alone has dozens of Goatman stories and sightings,” admits Couch. “There are 254 counties in Texas and there’s a story in every single one.”

While on the road researching his book, “Goatman: Flesh or Folklore?,” Couch and his wife visited Louisville to see the Pope Lick trestle for themselves and while he was in town became the apparent victim of a curse upon another one of Louisville’s most infamous legends at Waverly Hills Sanatorium.

“We were on the Waverly Hills tour, and just outside of room 502 where a nurse named Mary apparently hung herself, my heart started pounding uncontrollably and the hairs on my flesh started rising,” admits Couch.

“As soon as we left the area, the feeling went away,” he says, “but the very next day as I was getting out of the shower, my wife noticed these strange scratches on my shoulders that seemed to come from different directions. We both got really sick shortly after that visit with a mysterious bug that had the symptoms of pneumonia and lasted over the next six months. It would go away and come back again and again.”

Couch says that his search for the truth behind the legend of Goatman eventually led him to the story of a man named Charles “Ches” McCartney who became something of a legend himself. 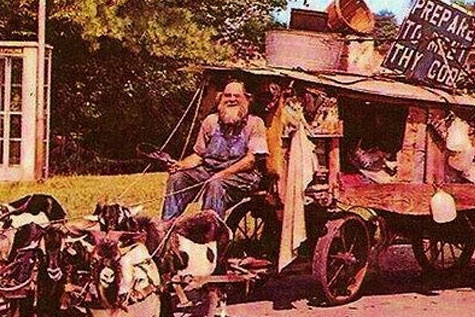 “Ches McCartney was a vagabond from Sigourney, Iowa who traveled all over the country for decades (editor’s note: 1930’s through around 1987) in a wagon pulled by a team of goats,” explains Couch. “McCartney had a mangled left arm that was disfigured in a timber cutting accident, and he often liked to dress in goat skins, earning the nickname ‘Goat Man’ as he traveled from town to town. He would eventually visit all 50 states, camping in farms along the road where he would tell tall tales and sell postcards with his picture on them.”

“He became something of a celebrity and people would come out to see him when he came to town,” he continues. “Imagine you’re a young child and your parents take you to see the ‘Goat Man,’ and his herd of goats. He has a long hillbilly beard, smells really bad and tells wild stories.”

“It’s not hard to imagine that kids would tell stories about Goat Man in school yards that would get more and more exaggerated down the chain,” explains Couch. “I know for a fact that he traveled to Pope Lick on numerous occasions over the years.”

Is Ches “Goat Man” McCartney the true source of the Legend of Pope Lick or is something more sinister behind the series of deaths and sightings that continue to haunt the area?

You can learn much more about The Pope Lick Monster and all the other horned beasts lurking out there in the woodlands just beyond our neighborhoods in J. Nathan Couch’s “Goatman: Flesh or Folklore?,” available at booksellers everywhere or at Amazon. Autographed copies can be requested at the Cult of Weird website.

Have your own Goatman story? What are some urban legends from YOUR area? Tell us about them in the comments below!