Haunted Labyrinth is a Haunted Attraction located in Cranston, RI.

Celebrating their thirty third year in business, The Haunted Labyrinth of Cranston Rhode Island’s Catholic Hope Youth Center is back with a completely new attraction, “The Lost Mine.” It’s always an amazing site to see the entire attraction change completely and keep bringing people back every year. It was a slow beginning to the first Sunday night of their 2017 season but the crowd quickly picked up speed by the time we were ready to walk in. I’ve been making the trip down to the Haunted Labyrinth almost every year since I began my haunted house adventures back in 2010 and it’s always a great time. We’ve been telling people for years that this might be the great hidden gem of the haunt scene in New England even though it is the one that has been on the scene longer than any other attraction!

We would say a good 95% of the cast is made up of children working for community service hours. In order for the students to graduate from their catholic schools they are required to fulfill a certain number of hours of community service and luckily for us volunteering at a haunted house qualifies. Being full of children volunteering their time, we have never gone into this attraction expecting to see high quality, professional acting. Most of the time we are just happy to see the kids actually doing something. I’ll never forget the first year I discovered the Haunted Labyrinth, there was a particular room about twelve feet long with a jail cell on either side of the walkway. There must have been about fifteen children on each side all screaming for help and reaching out to grab me. I think the fact that they were little kids made it much more effective. But, yes we were expecting to encounter an abundance of little actors sitting still and grunting as we walked by and that is what we ended up seeing. However, this doesn’t mean all the actors inside the Haunted Labyrinth were almost mindless props. Every year there is a character who welcomes you into the theme. This year they had a tour guide who brings us to the very last stop of the tour of old western towns. She did a very nice job with her dialogue explaining how some frontiersman had gone digging up the old town and soon after some spooky and mysterious things started to happen. We also really enjoyed the actor playing the sheriff as he was probably the only character in the attraction that spoke with a western accent, but was also very animated and entertaining as well.

A select few characters in the Labyrinth wore some costumes that could be associated with the old west but only in stereotypical fashion. We are talking plaid shirts and jeans instead of leather chaps and frock coats. The majority of the costumes were black cloaks and skeleton masks. There were a few clown masks as well but they called them rodeo clowns to help with the theme. We did spot a few actors with makeup and fortunately they didn’t let it go to waste since they did have some humoristic, yet disturbing dialogue. It isn’t often that we see many actors with props at the haunted labyrinth but this year they utilized them a little more to get the theme across. A bank teller threw money or a sack of coins against a wall, the general store clerk showed us his cockroach pies, and a coffin maker using his tools to cut into the wood were just some of the uses of character props.

One way I can tell I have made it to the Haunted Labyrinth is the flashing crosswalk lights and the off duty police controlling the traffic. The parking lot for the event is on the other side of a fairly busy street. They always have a crossing guard posted there and it makes us feel safer at this event. If the flashing light weren’t enough to point out the location then the facade they have built for the entrance is. For years now the Labyrinth has had this big haunted house facade built around the entrance to the youth center. Complete with old gray and rotting wood and windows with a lightning effect and even a candle-lit ticket booth. Signs point directly to the ticket booth for anyone wondering where to go.

They always have a few of the managers standing out front checking up on everyone and are always happy to talk about the event. We had a little laugh because when they asked us how far we were coming from to see this haunt we told them Scranton, Pennsylvania since technically we did come from there that morning but we live in the area. They felt proud for a minute knowing that someone drove almost five hours to see their show.

A few years ago the Labyrinth made these fun gravestone dividers for the waiting line and all the stones with funny names and epitaphs like “Rigg R. Mortis” or “Here lies good old Fred, A giant rock fell on his head.” Just another fun way to pass the time really but the fact that the waiting line is made out of a grave stones makes this haunt even more fun. The giant haunted house facade is a sure way no one can make a mistake that this is a haunted attraction. They do provide indoor waiting on rainy nights but on dry nights the line is a mere few feet from the road. Even though it is a fun night and we are getting spooked by some of the queue actors, the road really kills the mood sometimes. There is music playing even on nights when the DJ isn’t performing. Scary tunes from classic Midnight Syndicate and Nox Arcana play overhead before entering the building. One thing I wish they would work on is the first room noise distractions. When we enter the building we step into a room that is only blocked off by a thin layer of cloth. It is only a few feet away from the front door and therefore only a few more feet away from the road. The introduction scene plays out in front of us but we have to try and block out the sounds of people talking in the waiting line and cars passing by.

There are a few great characteristics about Haunted Labyrinth that keep me coming back every year. One of them is their unique take on entrances to a few of their rooms. The Labyrinth was the first haunt that showed me the concept of entering a new scene through a bookshelf, a refrigerator, a fireplace, etc. This year is no exception to their creativity. In fact I would say that their method has evolved this year more than any other year, but more on that in our “Fright Effect” category. During our visit with the sheriff of the old ghost town we were apparently under arrest for trespassing and then he opened the jail cell door for us. We would soon discover that maybe a real jail cell would have been preferred because that cell had an entire haunted town in it. My favorite little touch of the creative entrances was the coffin we had to walk through and push the back part open. If we didn’t know any better we would have been stuck in his little workshop with all the saws, hammers and nails. Not spoiling all the fun, I’ll just say that the final scene brought us into very close proximity of a few hazards of working in a mine.

Anyone familiar with this one-of-a-kind work of art can tell you that every year the theme changes completely. This year brings us to “The Lost Mine,” an old western haunted town with a dark secret hidden away in the gold mines. All of the classic western themed rooms are there; the saloon, the small church, the jail, the bank, the general store, etc. It’s a magnificent sight really because there is no mistaking the theme from year to year. They always have at least one big room that you can’t help but say “WOW!” every time you enter. Like in previous years they had what they call their “midway” which is a large set that you weave in and out of between different scenes. This midway captures the spirit of the theme better than some big name haunts do with their same repeated theme year after year. So the first time we entered we could see a sea of western themed decorations. The cow skulls, the wagon wheels, the public gallows, burlap sacks of grains, and everywhere you looked there was old weathered, dark brown wood beams and boards.

I’ve tried to find props and settings used from over the years and it is actually very difficult to find anything used twice other than a few masks. The majority of what they use inside the haunt is all new every year.

The actress that introduced us into the haunt explains that we were then in a different town down the hill from this haunted mine town. She says that legend has it some people went digging up the town looking for the fabled lost mine and they were never seen again. Although, locals do claim to have heard noises and have seen creatures running around the hillside ever since those men left to uncover the mysteries. No one knows where the town came from or even what it’s name is. The tour guide wouldn’t dare go up the hill to find out what is up there but dared us to continue the tour and find out for ourselves.

There is no other way around it, the majority of the scares you will experience in The Haunted Labyrinth are little more than youth volunteers quickly screaming and lunging themselves at you as you walk by. Maybe in effect this lowered our guard for the real scares. As I was praising the use of creative ways to enter the scenes I only assumed that some of the objects in the room would be meant for that. The Sheriff advised us to arm ourselves before searching for the lost mine so he told us to pick a gun out of his closet. *Spoiler Alert* We opened the door and were immediately thrown back by the “rodeo” clown that was waiting in there the whole time. This wouldn’t be the only time they used this trick on us and I fell for it every time! The scariest thing to us has always been the reality that sometimes these little ones are hiding at our feet. All we can think about is getting tripped or pulled down.

Tickets are $12 cash at the door and $13 credit or debit card. The attraction averaged around twelve minutes depending on how adventuress we were. Sometimes people know to walk through anything that looks nothing like a door and sometimes people cannot fathom the possibility that a cabinet will lead them to freedom. With this price at this length we get a solid minutes of entertainment received per dollar score of 1. The profits go directly to help the catholic youth programs in Rhode Island. Even building the haunt itself is done by volunteers to teach leadership and labor skills. With snacks and beverages and weekend entertainment in the waiting line, we recommend Haunted Labyrinth as one of the must-see attractions in New England. 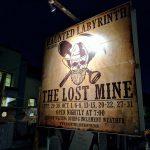 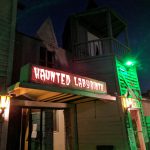 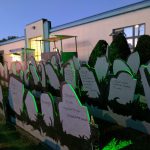 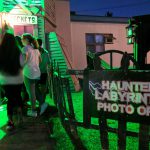 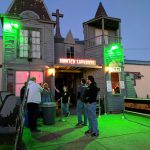