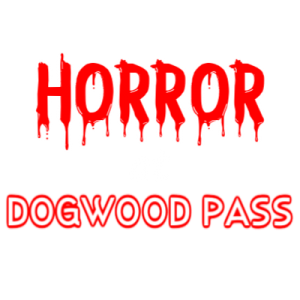 As the sun sets on Dogwood Pass and the denizens of this fair city have all sauntered home down the city’s dusty streets, it is time for evil to descend upon the town’an evil that no tin-starred law dog can save them from. This has become the way of life in Dogwood Pass. By day; a quiet wild west town full of life and excitement but, by night, the town is overrun with ghoulish creatures and the townsfolk are out for blood’YOUR BLOOD! This may sound like an odd tale from some dime novel, but this is the story of Horror At Dogwood Pass. For most of the year, Dogwood Pass; a replica wild west town in Beaver, Ohio, serves as a home to various wild west shows and even a light display during the Christmas months. However, for the Halloween season, they transform the historically accurate town into a ghostly haunt with a western flair.

For most of the characters, the costuming and makeup were fantastic. There were a few people in regular street clothes, which is a ‘no-no’ for us but, they were countered by perfect renditions of Freddy, Jason and the devil from Legend. They were gorgeously portrayed and the actors that opted to don their (historically accurate) wild west attire, added some blood and decayed makeup to give it that Halloween flavor. They could definitely benefit from a trained makeup artist but, overall, the characters were great and complete. Other than the previously mentioned faux pas, the masks were all nicely fitting and worn well.

We lost GPS signal a few times on our way to Dogwood Pass but, thankfully, there were several signs to keep us headed in the right direction. The parking lot was lit and it was easy to find the ticket booth once we found a parking spot. There was only one port-o-potty that we saw and, by the time we got there, it was out of toilet paper. The gentleman at the ticket booth seemed so happy to be there and was extremely gracious and handed us our passes before letting us know where to go from there. Their merch booth was well lit and it looked like they had some food offerings as well. There is a lot of uneven terrain and several stairs that you have to navigate but, the crew at Dogwood Pass make a serious effort to keep you safe. Stairs are either pointed out by actors, signs or brightly lit. As we waited to enter, a screen to our left was showing ‘Evil Dead’ to keep us entertained until it was our turn to enter the town.

As ‘Evil Dead’ played on the screen next to us, the screams of terror and the sound of cannon blasts and revolvers echoed across the landscape. We could tell that we were in for something’but, exactly what’was left to the imagination, as our brains rushed to put the pieces of this auditory puzzle together as we were waiting to enter the haunt.

Somehow, Dogwood Pass managed to utilize just the right amount of sound effects throughout the attraction’even if that sound effect was pure silence. We know that that seems funny to say, however, the level of silence that they achieved in some of these areas was unbelievable and definitely added to the creepiness level of it all. This haunt lives in a historically accurate replica of a wild west town and, with that, comes a great level of detail in the majority of the scenes. Two scenes, in particular, caught our attention for their innovativeness and creativity. The first was the room with the possessed woman, contorting her body all across the floor as furniture floated and twirled around her. It was such an amazing effect and yet, it was also a very simple one, which made it even more impressive. The second scene was that of the devil from Legend. The costume was gorgeous but, what really caught your attention was his flame-throwing staff that he would blast off very close as you walked past’charring the trees next to you. 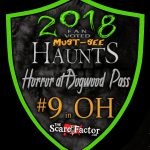 Best Dynamic Duo - The Headless Horseman and his horse (Given by: Team Teachers of Terror)

Scariest Axe Assailant (Given by: Team Teachers of Terror)

Best Spider Victim (Given by: Team Teachers of Terror)