What could be more iconic for Halloween than The Legend of Sleepy Hollow by Washington Irving. The Headless Horseman, Ichabod Crane, Katrina Van Tassel, Brom “Bones”, Baltus, etc. all make up the ultimate scary ghost story.

Now imagine being able to walk through those scenes, see those characters and experience the story for yourself, and do it on the Hallowed Historic grounds that it was about at Philipsburg Manor in Sleepy Hollow, New York.

It would be like if someone had a haunt built on the property of the house in Texas from the Chainsaw massacre complete with Leatherface. It’s an extremely rare case of being able to experience a classic story in the actual location.

The transformation of the Colonial Era property into a haunted trail is so cool for fans of the original short story, the time period, or history in general. Being able to use the old buildings and grounds to recreate the story is a phenomenal advantage for Horseman’s Hollow giving it authenticity and detail to the sets.

Being a historic site they seem to have plenty of period-related clothing and props to use as well. It all just makes this a gorgeous haunt to look at and admire. It’s the kind of place where you just want to stop and take lots of photos, even though you will get yelled at like I did at the entrance to the trail. Of course I try to stir up the demons and creatures whenever I can anyway so it was fun.

The list of iconic sets are all here, Ichabod’s school house, The Old Dutch Church, The Covered Bridge, and it is so awesome to go through these places that I felt more like I was sightseeing rather than being scared from place to place. In fact the sight of The Horseman himself brought out more cellphone cameras than screams.

Horseman’s Hollow, now in its eighth year, has become extremely popular both for its connection to the beloved story, and the reasonable ticket prices of $20 per person or $25 on Saturdays. As such it was packed the night we went, which was Friday the 13th, so that may have increased the body count and lead to the staff having to pump through as many people as possible with the huge crowd and it was only 7:30.

They use timed ticketing so if you show up before your time you will be queued up until it’s time for them to let you in the actual line. You can also get a Fast Track ticket for an extra $15 and this will allow you to queue up in a separate area, but will still not get you in until it’s your time. Once inside, you walk along a dark path until you get to the actual start of the haunted trail. From there you travel through a ghostly attic which may have been my favorite part aside from the weak floorboards that concerned me a great deal, but it’s a beautifully executed scene to start. Then there are other small buildings, military encampments, and even a pirate ship and gypsy camp before you get to the parts related to the Washington Irving story specifically.

The only downsides were the conga line of people that developed from the huge crowd, which wouldn’t have been so bad except for some other unseen reasons where the line completely stopped in the middle of the trail, for like 5 minutes it seemed. It was awkward just being stuck in one spot with a whole line of people in front and in back of you, but I have to hand it to the gypsy girls who played it off like nothing was happening.

It was cool being able to see these iconic characters up close, including the Headless Horseman and I would look at a trip through this haunt as more entertainment than scare fest, but the grounds are so gorgeous at night, and with that ticket price it is more than worth going for an evening to be in this classic story.

The actors were certainly believable in their roles and looked like they belonged in the time period. It was actually really good to see so many full grown adults at a haunt rather than just teenagers. It made the characters feel more realistic and threatening.

In general the scare actors did a good job with their characters and the environments they were in.

Costumes were a strong suit as you might expect, and perhaps I’m biased by the time period, but I loved the outfits and details of the clothing throughout. This section got perfect scores on believability, authenticity, appropriateness to the scene, and making sense for the characters. Just beautiful period attire here to get four perfect 10’s. Hard to compete with the clothing but the makeup was not spectacular I felt, but more so they ended up using a lot of masks here. I think if the masks looked more realistic it wouldn’t have been so bad, but there were a lot that were oversized, which made them more comical than scary.

There was one makeup job that could have been a mask, it was hard to tell, on what looked like a male vampire in the church. Perhaps he was a demon, but he did look awesome and probably wondered why I was staring at him.

The staff here was extremely friendly despite the massive crowds and they seemed to handle the somewhat confusing queue system very well so that everyone was where they needed to be. It is easy to find through GPS as there was not really much in the way of signs, but you take the first exit off the east side of the Tappan Zee Bridge, follow Broadway down through the insanely busy village of Tarrytown, and you will come upon the front entrance of the haunt. There is parking out front in different places, but I recommend following the signs to overflow parking which is free, and takes you around the back of the place. It’s worth the little hike to come back to the haunt along a dark trail lit only by candle powered lanterns. Just before you get to the main area you can see the old buildings across the water, with the lights and the fog, creepy music and screams. It’s a really cool sight.

Once in the midway they had a Vampire roots band playing, like Mumford and Sons from Transylvania. They were very much in character and their makeup was well done. There were others who interacted with the crowds in line as well, and did a great job of it.

There really wasn’t anything dangerous, except maybe those attic floorboards that scared the heck out of me as they gave way a little as you walked over them.

The atmosphere of the entire place could not be surpassed. Perfect 10’s for music, sounds, and feeling that you were at a haunted place. Particularly key to point out was the simple use of voices and sounds coming from off the trail, of wild animals, children, or ghostly voices. It’s such a simple thing adding these little touches, and they add so much to the atmosphere.

The look and feel of the sets, costumes, and landscape surrounding you are amazing. No doubt the best looking haunt we’ve been too. I mean just standing across the water looking over and hearing the music while standing in just candle light was cool enough alone, and that was before we even got into the haunt.

Sound effects were awesome and went above and beyond here. They were certainly effective in setting the atmosphere and storytelling. There wasn’t any really special FX other than the sets, and things which included a pirate ship. There were a lot of structures I wanted to touch as they looked very authentic.

The detail for the scenes was really good, except perhaps one transition area that was just a blank black circular space that only seemed to serve to bottleneck the line.

Lighting was well used, like the sound effects to set a creepy tone. Nicely highlighted the areas without destroying the dark ambiance of the location.

Obviously a strong suit as they have a fantastic theme to work with, possibly the greatest Halloween story ever, which is still incredibly popular almost two hundred years later.

You can clearly tell the theme as the story of The Legend of Sleepy Hollow, and they execute it very well. They give you all the characters and scenes you would want. Plus they have the most authentic location for a haunt you can think of. I mean it’s the Headless Horseman in Sleepy Hollow!

The downside is that there is not a lot of room for creative and original, and the only thing that seemed out of place to me was the pirates. Although I guess there was a possibility with the Manor grounds being right along the Hudson River.

There is a strong chance the non-stop train of people winding through the small sets doesn’t allow for a lot of scaring room, but it seems like it could be better. There were a few good jump scares of an actor behind something, but mostly they were stuck in the open, and not really setup well to frighten people. It was kind of like walking through a living play where they were acting out the story, which was entertaining but not really scary. The couple of locations that seemed designed to try and break up the line only served to bottleneck it which broke the immersion feeling going through.

There is a great deal of entertainment value here even with just a single attraction. It took about 40 minutes to walk through with the line stopping occasionally, but for the ticket price it is still worth it for the atmosphere, location and period detail. There’s 20 acres on the property and they use a great deal of it especially the buildings.

It’s definitely worth the trip into the pages of the best scary short story in it’s actual location at a really beautifully designed haunted attraction. 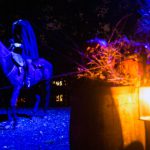 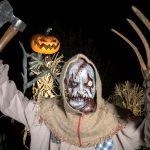 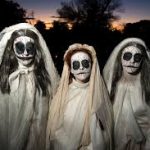 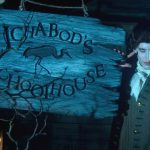