In the sleepy little town of Perrysville, Ohio lies a schoolhouse that was built in 1924 and whose hallways echoed with the laughter and conversations of young children until it was closed in 2012. Children still make noises throughout the building’s hallways and classrooms but, these days it is screams and shrieks! The former schoolhouse is now home to Lessons In Fear, owned and operated by home haunters-turned-pro; John and Flo Gepperth, who opened the haunt last season.

This is an old-school style, multi-themed haunt that covers four different areas. After getting your ticket, you make your way through “Slaughterville;” where Junior (the pig faced hillbilly) hopes to catch you off your guard as you check out a film at the Slaughterville Drive-In. Cornstalks, critters and a few rickety shacks surround you as nature provides the ambient noise.

Upon entering the building, you find yourself in “Contagion”, a government experiment/toxic spill gone awry. You find yourself confronted by a crazed butcher and several deranged patients…errr victims…umm people. They will keep you on your toes and they pop in and out of the passages and cells around you.

Next, you make your way up the stairs to the “Dead and Breakfast.” A less-than-cozy little cottage operated by The Bride, a woman who has buried more than her fair share of husbands and is always looking for the next. Be careful, or you may end up tying the knot…and then SHE’LL tie the knot…around your neck.

Finally, your journey ends with a trip through the classic monsters area of the haunt. A sort of throwback, paying homage to the old monsters we remember from our youth. Vampires, werewolves and all the classic nasties take the stage in this new section of the haunt.

Lessons in Fear is staffed by volunteers but, that does not take away from their dedication. They could definitely use a few more actors, as most of the haunt is a little light on coverage. The folks down in “Contagion” did a great job of utilizing their secret passageways to hit us several times as we passed through. They covered a lot of ground very quickly. We also would have liked to see a bit more dialogue, most of the actors just kind of screamed at us. The lunatic in the shock therapy room was fantastic with his walk and I was a little concerned when he asked if we wanted to see his sparkles. Another fantastic character was the lady in the spider room. Katie was really caught off guard when she popped up. Baphomet in the altar room was another notable character. Their movement and dialogue were great, even though they were a little difficult to understand through the mask.

Two of the costumes that really stood out to us were the Scarecrow in Slaughterville and Baphomet in the altar room. The scarecrow had so many subtle details, that we really had to take some time to catch them all and Baphomet was just an all around beautiful costume. Along with those two though, you had your standard psycho garb, a few clowns and some other stand-alone characters. The lady in the spider room had a very simple costume but, it worked great for her character. All of the costumes were well put together and nothing really looked cheap or thrown together. There were a few masks, which made dialogue a little difficult but, worked well with the characters wearing them. Their makeup team could use a little practice making a cohesive full-body look. It was a little simple and sloppy but it was by no means, horrible…just needs a little help.

Lessons in Fear definitely takes safety very seriously. All the stairways are brightly lit and the steps outside in Slaughterville are painted along the edge to make them more visible. There are marked exits everywhere (a benefit of using an old school building) and everything felt very secure. Our only two safety concerns would be the dark parking lot and one section on “Contagion” where an actor was kicking their leg out from under a sheet into the walkway. Someone could be tripped pretty easy if they aren’t paying attention. Other than that, the entire staff is fantastic. There are a great number of security personnel walking around in very bright t-shirts and Jared, at the ticket booth, is incredibly friendly and enthusiastic. If you can find Perrysville, you can find Lessons in Fear. They sit on the main street coming into town and have a couple of lighted signs in front of the building, along with their hearse. Slaughterville IS the queue line and they keep you entertained with a movie and a few roaming actors.

Once you enter Slaughterville, you are definitely at a haunted house. There is a movie or video showing at the Slaughterville drive-in and, while there is not a recorded soundtrack playing, nature provides plenty of ambient sound to keep you from forgetting that you are not sitting comfortably at home. It’s a little calm and laid back outside but, that changes once you enter the building.

The majority of the effects in this haunt are all hand-made and some of our favorite effects were very simple yet effective. I think our favorite was the shock therapy room. They abandoned the standard wooden wall sections for chain link fencing and placed a beautiful chasing LED at the top-center of the room. The light catches your attention immediately as you enter the room and gives the actor a chance to pop up and get you. The runner-up would be the altar room. Two large altars sit in the middle of the room, surrounded by four large pillars. Fog fills the room, but all you notice is the green laser line that cuts through the room at waist height. After a while, it gives you the feeling that you are wading through a bog. There are several animatronics, most of which are made in-house, that are well-placed but, the timing seemed a little off on a couple of them. Overall, while the effects were often simple, they were well used.

As we said before, this haunt has several themes and it can be difficult to tell where one ends and the next begins, without asking. Although, you generally have to walk up stairs to get from one section to the other, there is some “flow-through” between them that blurs the separation. Once you know which is which though, it is easy to tell what and who is supposed to be where and they all fit in nicely. While most of the themes are pretty standard fare for haunted houses, the Dead and Breakfast is quite unique and is decorated beautifully. The Art Room was an excellent touch as well, and not something we have ever seen done before.

While the animatronic timing was a bit slow for some props, and the actors did focus mainly on the female contingent of our group, they were still effective at creating surprise scares and delighting the whole group. The spider lady was especially surprising, given she was hiding in plain sight. Many of the scares were of the jump variety, though a few key characters used their imposing presence to create feelings of dread as soon as you enter the scene.

It took us just under 30 minutes to make our way through the whole attraction, and at $18 a ticket, offered us a minute and two thirds worth of entertainment per dollar. No ticket upgrades are available at this time, but the creepy ambience and intricate details of Slaughterville should keep most guests entertained while waiting in line to enter the haunt. Every corner of the attraction is riddled with details and there is still room to grow into currently cordoned off rooms of the schoolhouse. Parking is free and there are ATM services available at the gas station next door 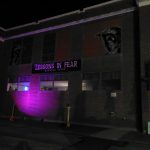 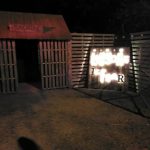