There was a particular point on the hayride where we entered a facility labeled ‘The Zombie Rehabilitation Center.’ There was a voice playing on some speakers that seemed to suggest this place was some sort of facility that could bring your loved ones back from the dead. I was trying to understand what the voice was trying to say but I couldn’t hear much with a zombie girl screaming her lungs out in my ears. We liked how a clown came out of an ice cream truck and started terrorizing everyone on the wagon. I feel like some creative points should be awarded here since I don’t see clowns coming out of clown themed things as often as I should. They have a great clown room on the hayride that has some clowns doing flips over a net directly above us. 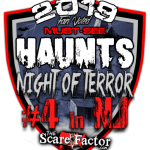