The actors were very believable, showed intensity, and interacted with guests. The line actors outside of the haunts gave photo ops and served as customer service. The ticket takers in front of each haunt engaged with guests before granting them entry. Most of the actors inside the haunts either growled at us or stared at us intimidatingly, but there was an actor in Pirates Of Emerson who stopped feeding on a dead body to tell us he was going to use our teeth as a necklace. All the haunts had sufficient number of actors, so there were no dead spots. From hiding behind scenery, behind corners, and using animatronics as distractions, the actors used their surroundings and props very well. We can’t think of any cast member who did not give it their all. Actor shout outs to ‘Gigante’ the pirate, ‘Needleman’ the pirate, ‘Cutthroat Sanchez’ the pirate, and ‘Caleb the Crazy Cave Pirate’.

When you are outside of the Themed Park, the only music you can here is what is playing from the performance stage, so it does let guests know the place is open for business. The front fa������ade appears as gothic grey brick walls, with a large banner of the name of the park on one side, and a theatrical light shining the name of the park in a yellow light on the other. The ticket booths are in front, and the employees there are dressed as undead pirate wenches. The vibe outside gives a hint to what’s going on inside, but let’s face it, it’s so much better on the inside.

Each haunt had appropriate music and sounds, so there is no awkward silence anywhere, and served the ambiance of the haunts well. There are a variety of special effects throughout the haunts, from numerous animatronics, a claustrophobia tunnel, vortex tunnel, air compressors and an abundance of fog machines. A new effect for this year, was an actor attached to an elastic band, so he could lunge down at us from a dark corner and bounce away. There’s a very impressive attention to detail, and we couldn’t find any place or any scene that looked incomplete. Special Shout Outs to Beneath The Darkness and Pirates Of Emerson for exceptional scenery d������cor! An extra detail to The Dark Gauntlet this year, was the use of laser lights, that disoriented us throughout the maze. Although lighting was used sparingly, it was highly effective in creating a scary atmosphere throughout the park.

Score N/A
The overall theme of the Haunted Themed Park is pirates, from the pirate ship as a stage backdrop to the line actors dressed as various undead pirate deckhands. Each feature haunt has an independent theme of its own. It’s very reminiscent of template used by major theme parks like Disneyland, but this is a ‘Haunted’ Themed Park. Farmaggedon and Terror-Torries both used hillbilly themes. Pirates of Emerson is the obvious pirate theme. Trick Or Treat is a hodgepodge of common Halloween haunt themes, with each room featuring a different theme. Beneath The Darkness is the most original, because it’s hard to describe. It feels modern day, and it gives you the impression of walking through basements and utility service tunnels, which we don’t see other haunts use. 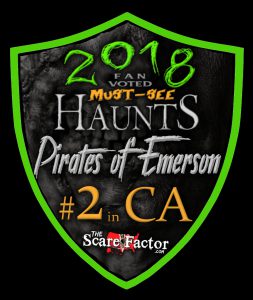 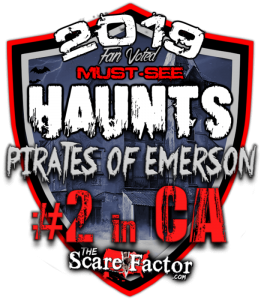 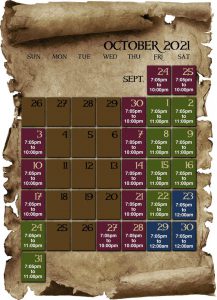 Judy – 8.5/10 – October 23, 2020We waited about 40 minutes on a Friday night to enter the attraction. The entry was very well …show more organized and ran smoothly considering the large number of vehicles. Each scene was a separate vignette. We especially loved the pirate ship and the prison scenes, though all were fun. There were four of us in the car (ages mid-20’s to mid 60s’s) and throughout we enjoyed a fun, celebratory mood. The actors came up to the car on both sides. Since I was the driver I missed seeing some of that action, but the delight of my passengers made it all worthwhile. I appreciated that the cars were spaced well apart so we had a mostly individual experience like driving through a haunted town by ourselves. Added to the suspense! We all agreed that it was really fun and we would do it again, and it was worth the $95 admission for the car. The drive through was about 30 minutes.