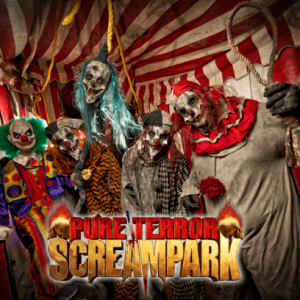 Halfway through the walkthrough this haunt earned the nickname Pure ‘Stuff-In-Face” Screampark. Every other room had S.I.F. hanging from the ceilings to distract guests as they walk through but, after a while, it becomes annoying. Also, there is an overuse of claustrophobia balloons. We counted at least 3, but possibly more. There was also a completely dark room where you could hardly see your hand in front of your face as you walk through, but it went on too long, and also had endless S.I.F. throughout its entire length. Some of the animatronics are cool and a few rooms had some great detail in them, but mostly it felt like a prolonged adventure with the same effects just repeated too much.

Santos Carr – 10/10 – October 16, 2021Pure Terror Scream Park is by far the best haunted house I’ve been too. Last season, when I attended …show more during the pandemic, they did a great job keeping costumers safe and following local rules which were very strict (NYS). The sets are too notch and the actors were amazing. Can’t wait to return this year

Montgomery – 10/10 – October 31, 2020100% the greatest i ever been to. Its lile your in your own horror movie so so so real. On point …show more from start to finish and super longggg well over an hour to complete all 10 haunted houses. Worth every dollar. I guess you get what you pay for. We will be back this Oct 2021 I just purchased tickets for 10/3