Free Parking, Food/Concessions, You will NOT be touched, Original Characters

Scary Rotten Farms is a yearly farm haunt celebrating 7 ‘unlucky years’ in 2017. Made up entirely of 55-60 volunteer actors on 4-acres of land, this outdoor haunt is sure to have you coming back yearly. This year the haunt encourages audiences to attend their 2 terrifying haunts, which include Sinister Sneed’s Chaotic Carnival of Chaos and Blackened the Plague. If you are looking for some good pop out scares and some really creative scenes, this haunt is right up your alley.

For a bunch of volunteer actors, this haunt is super impressive when is comes to its characters. No matter what situation these actors were in, they all knew their characters well and how to answer any questions the audience had for them. Throughout the entire haunt, especially in the Carnival, the actors were fantastic. Most of the actors (Besides a few newbies that stood in the corner) were amazingly interactive with the audience and pushed the tours forward. Some of our favorites include Mr. Sneed himself and a Ball Pit clown who was intimidating in stature and in character. One of the more impressive aspects about this cast is the fact that no character said the same thing. Each character initiated conversation and encouraged unique answers that would change each tour from each other. Also, this cast really knew how to use the set and props around them to help complete their characters. Overall, the actors of this haunt especially the clowns made this haunt exciting and unique.

While there was nothing unexpected, the costuming at Scary Rotten Farms was effective and realistic. All actors were in full costume including shoes, makeup and clothing. The costuming was also effective at completing the look of the haunt. The makeup seemed to look good, although the lighting prevented the makeup from being seen clearly at times, especially in the Plague walk through. Actors are encouraged to do their own makeup but most of them were wearing masks.

When first arriving to Scary Rotten Farms, it is obvious that it is primarily a farm. There is a big billboard sign that advertises their haunt on their property and a ticket booth when you first walk in. The haunt hires a police officer to help navigate traffic since parking is tight. There are 2 queue line actors entertaining the crowd effectively. There is no merchandise to buy but there is a food truck in the parking lot for concessions. There are two porta potties on-site for restrooms. Staff members are friendly and available for questions.

Outside of the haunt the audience members are asked to wait to go into the carnival first. There is no music or decorations besides the mums and pumpkins that the farm is selling. When waiting there is no music or ambiance at the entrance but there is a circus tent with clowns entertaining the crowd.

One of my favorite parts of this haunt is their use of special effects. The use of sound effects and noisemakers set the scene so effectively especially in the carnival, that it makes you feel like you are actually attending a circus. The lighting in this haunt is so well done and it effectively directs the eye where to look and go next. The lighting makes this haunt and sets a tone of uneasiness especially in the circus. The plague uses the absence of lighting to make the woods seem even creepier. The scenes in this haunt especially the circus are so well detailed that it is just fun to look at!

Overall the themes were very obvious especially with the d������cor and actors reminding us about them. The carnival was move obvious then the plague because the d������cor was nicely lit and the costumes were obvious. The Plague was a bit more difficult to distinguish because of the dark lighting and less decor.

Speaking from someone who is hard to scare, this haunt got me! When comparing Scary Rotten Farms two different attractions, one is definitely scarier than the other. If I had to choose one to go through it would hands down be The Chaotic Carnival of Chaos. The clown section of this haunt is so fun and the actors are top notch. With their use of hand noise props and effective pop out scares, it is almost impossible not to be scared. The Blackened Plague however, still had some really good moments but ultimately the actors had a harder job. With The Plague being in the middle of the woods with minimal lighting, the actors had to work harder to get the job done.

With a ticket price of $30 for both attractions and the amount of time it took us to go through, this haunt is a good time. It took us about 35 minutes to get through The Carnival and about 15 to get through The Plague with no wait and at a leisurely pace. For the price of a movie ticket for 2 people, we had a great time. 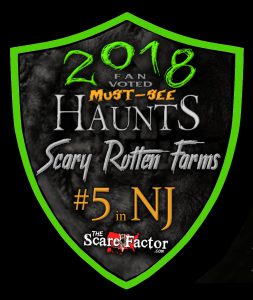