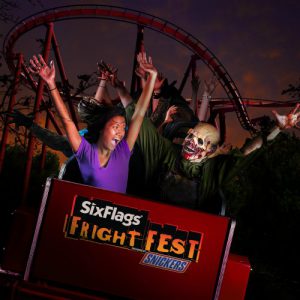 Thrills by day, fright by night! That’s what Six Flags offers when the haunt season rolls around and they open up for Can-of-Beans Fest! I mean Fright Fest! I honestly haven’t been to Fright Fest since before haunted houses were introduced, so I was intrigued to what they had to offer. Back then, you paid park admission and got some roaming scaractors and a few stage shows, including one where you were ‘hypnotized’ and another where guests were encouraged to sing some scareoke. The interactive shows may be gone, but a number of other shows have taken their place, as well as Fright Fest’s main draw now, their haunted houses. Be ready though, folks, ‘cuz to get into these haunts will run you about $75, and you are gonna have to get through amusement park crowds to get through each haunt. But, how can you say “no” when the first thing you see is a fountain spurting blood and a giant pumpkin-headed scarecrow welcoming you in? Since there were numerous haunts, we took the time to rate them on a scale of 1-10 individually so you can prepare ahead of time for which to rush over to once dusk rolls around.

Big Top Terror- 7. Good use of old rides and equipment, clowns were interactive and energetic.

The Manor- 6. Housed the most notable sfx, but was quick and lackluster.

Aftermath- 5. ‘Why is there so much blood on this fence? Did they just drag someone at hip level for 20 feet?’

Cell Block 6- 6. The Yard was the best part. There are more nurses than prisoners.

Blood Shed- 6. The scaractors were the gem of this haunt and stayed in hillbilly character.

With a pamphlet promoting everything from clowns to zombies to mutants to urban legends, the lineup for things that go bump in the night seemed star-studded with a slew of haunted house tropes. Unfortunately, a lot of these creatures all fell into a ‘jump out and scare you’ or ‘grunt and groan’ category. With the exception of a few creative clowns, a handful of hillbilly hackers and one very in-character and energetic prison inmate, most of the cast blended into a sea of ‘grr, arghs.’ After giving their initial scare they would fade away back into their set or stare at you as you left the room. Again, this doesn’t go for everyone. Some were very interactive with the guests, even when they didn’t know how to respond, they would at least try. Such was the case with the ‘you wanna play?’ girl. Not expecting a very enthused acceptance of her friendly invitation from us, she stumbled for a second to think of a comeback, but then kept trucking and played along with us. If only more of the cast did the same. There were some spots in the houses that were noticeably understaffed or missing a character. We passed a snake lady body that was just plain missing the lady part and a number of empty shower stalls and jail cells made for missed opportunities. Some of the cast used their surroundings very well, such as the clowns climbing the old park equipment and rides that were in their house and one zombie on top of a car waiting for fresh victims. But, most hid behind a wall and shook a can of beans at passersby. Oh, did I mention Can-of-Beans? ‘Cuz theres gonna be a lot of that.

Watching the parade of ghouls (from the inside of the funnel cake sundae shop, because FUNNEL CAKE SUNDAE!), our hopes for the costumes of these creatures was raised high. We saw colorful clowns, frightful fables and some impressive ice witches. Those were used for 2 or three of the houses that we went through. The rest were pretty much a generic, plain zombie/mutant/human clothes and, in some cases, the makeup was either exaggerated or very minimal, which either took away from the authenticity of it or made us wonder if they had any makeup. Don’t get me wrong, though; as I said in the beginning here, some of the costumes and makeup was astounding. The tree creatures, the ice witches, pretty much anything from the Wicked Woods haunt was really nice. But, when you advertise half human, half animal mutants, there should be some fun animal parts sprouting out of at least two or three characters. The few masks that were used were done so nicely, though.

Most of the staff at Six Flags were helpful and attentive. Security was noticeable in case there was an incident and medics seemed nearby at least some of the haunts just in case of an issue. There wasn’t anything truly dangerous, though there was one animatronic that swung outwards towards guests and, being made of metal, could potentially whack someone in the head. The scaractor in the room didn’t do much in the way of keeping guests away from it… which, if a metal door swings open at face level, the scaractor may want to keep people out of said space. Some of the haunts were a bit tricky to find if you didn’t happen to pass the signage in the daytime. Others, though, were vibrant and stood out, like the Big Top Terror queue. There wasn’t really any queue entertainment. One haunt actor came out to mess with the line for the first haunt of the evening since dusk was slowly descending on a growing line of guests. In that same line were some prerecorded messages as various prison workers/inmates using the intercom. Though, they were very random (the inmates singing happy birthday to the warden, and not in a creepy way, just normally singing it). Other than that one haunt, there was no real queue entertainment.

The atmosphere is easily the best part of the overall area. As you walk through the park, eerie music plays and roaming scaractors terrorize random park goers. Fog machines are placed along certain walkways or paths and hidden scaractors await people to wander within range for a good scare (or to shake their can of beans at). The Cell Block 6 house had a good queue setup, with intercom messages, flashing lights, a front gate of a prison, all of which suggesting that you were about to enter a prison filled with crazed or loose inmates. Other houses were doors in the side of a warehouse. So some let you know you were walking into a haunt, and others not so much.

A lot of the effects used here were low budget or low tech. Sometimes that works, but not so much here. Music played inside almost all of the haunts, but sound effects were sparse. The best sound effect, in my opinion, was walking into the prison yard and hearing actual music, and that they managed to keep that music isolated to just that one area in an outdoor walk-through. Lighting, though, was dim throughout all the houses. The Wicked Woods was a dirt trail, so the lighting there worked since it was mostly moonlight and a few scattered lights and the clown maze used 3D paints, so darkness helped the paints glow. Total Darkness was’ total darkness. A few of the sfx that stood out were a roll-away wall that led you into the next room, a falling chandelier and a coat rack monster.

I purposely went into each haunt to see if I could tell what the theme for each was, while my partner Holly Ween knew the insides and outs of each of the houses from both the pamphlet and from some of the houses being the same as last year. Haunts like Big Top Terror and Total Darkness were self-explanatory, but houses like Aftermath and The Manor were a bit confusing. Even in Cell Block 6, we were unsure if the prisoners just escaped, or if some were zombies, and why there were more nurses than prisoners. Houses like Blood Shed had some colorful characters, though it lacked the half animal mutants it publicized. And then you had Wicked Woods, which delivered amazingly on what it said it would. Bigfoot, the Jersey Devil and more make their appearances and look good doing it.

With a name like Fright Fest, we were hoping for a good handful of scares. It’s understandable if we aren’t the ones being scared, but a number of times, even the people we were with just weren’t scared. There were a few exceptions, such as a good crowd in the Big top terror house who did not like clowns and even one mutant hillbilly who did manage to catch me slightly off-guard. But, the majority of scares were drop-portraits, jump out scares, or can-o-beans shook in your face. Distraction was used once or twice, but most of the scares were predictable and seen from a mile away. The finale of each house was also pretty much just an exit, with no strong finale.

The score here is an amusing coincidence, and made us laugh when we did the averaging. When you take all of the bits and pieces that go into the value, it ends up being a bit tricky. We aren’t grading Six Flags as a whole, just mostly the haunts. But, we also have to take into account the scarezones and shows that they provide too, since other haunts do sometimes provide shows or other entertainment before or after the haunt. That also means we need to mention that, in order to get into the haunts, you need to buy a maze pass or individual haunt tickets as well as admission to Six Flags as a whole. That can add up. General park admission is $56.99, a maze pass is $29.99, a combo that includes both is $75.99, and if you want an express pass, there’s even more math and conditions. That being said, if you buy the combo, you get 7 haunts, a multitude of different shows ranging from a full-fledged stage show to some mini shows including a DJ, a magician, a flame artist and the enjoyment of watching roaming scaractors terrify random guests. Plus, if your paying all that for the park too, you may as well arrive early and ride some of the coasters and other thrill rides, since those may be scarier than some of the haunts.