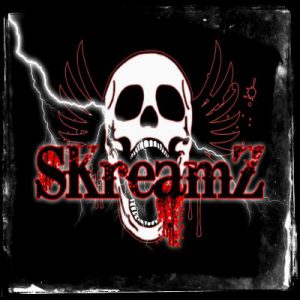 There’s a movement in the haunt community to declare the second Friday of October as National Haunted House Day, which encourages the general public to support their local haunts. We live in the California suburb of Fairfield, which is a midpoint between San Francisco and Sacramento, and we chose to attend our hometown haunt, SkreamZ Haunted Attractions, formerly known as Demon DreamZ. SkreamZ is the creation of Eric Land, and he has been bringing his haunted vision to life for 5 years. SkreamZ is a single walk-through haunt, and the theme changes on an annual basis. This year, SkreamZ introduces the Laffco Toy Factory, where attendees can see how toys are made, including who and what materials are used. SkreamZ is a small haunt with a small budget, and to be honest, the temptation is there to dismiss it. However, if you give it a chance, you will not be disappointed.

The actors of SkreamZ show enthusiasm and intensity. They are very verbally interactive, so when we asked questions, they would reply back. None of the actors broke character in the process. Several of them used props, such as the girl in the doll hand room who wanted to chop our hands off with a guillotine, the porcelain doll-faced men in the maze brandishing machetes, the mad scientist dissecting a human body in research and development, and the bunny masked man who chased us out of shipping and receiving with a chainsaw. There was some original dialogue, such as the lady in the front office warning us not to touch her toys, and the janitor monsters in the restroom warning us not to use the toilet, but some actors used old clich��s, like ‘Get Out’ and ‘Come play with me.’

The costumes in SkreamZ are original, and are not the Halloween department store apparel. Many actors wore Victorian-era clothing and makeup in the style of Victorian-era porcelain doll-faces. There were a few masks worn in that same porcelain doll style. The actors of the puppet master room had demon masks and walked on stilts, giving them a very tall and menacing appearance. There was a stuffing room that mocked the ‘Build-A-Bear Workshop,’ where we encountered actors in life size bear costumes. The doll room had a couple evil looking Teletubbies walking around, and the mad scientist in the research and development room was covered in blood. The most unique costume was in the inverted ball pit, where an actor was dressed as an inflatable tyrannosaurus rex. Upon exiting the shipping and receiving area, a man wearing a cute bunny mask chased us with a chainsaw. The combination of Easter Bunny and chainsaw was quite unforgettable.

SkreamZ is a very safe haunt to walk through, no tripping hazards, and visible ‘Exit’ signs. The only advertisements are small signs on stakes scattered sporadically in the city of Fairfield. As you arrive to the location, there are sidewalk/sandwich boards with the haunt’s name pointing the way. SkreamZ is easy to find because it’s on a busy street, and there is plenty of parking. The ticket booth was easy to spot, along with a sign with the safety rules posted. Unfortunately, there is no queue entertainment while you wait in line. The staff was polite and very helpful when we asked questions. They were easy to find, because they all wore black shirts and jeans. Since Skreamz is a small haunt in a store front, they don’t have public restrooms, no concession stands, no gift/souvenir shops, no games or any side entertainment.

SkreamZ is located in a strip mall, so that’s the overall vibe on the outside. There are sidewalk signs pointing to the location, and a banner with the haunt’s name above the store space. No music is heard outdoors, nor any actors seen. Inside, the d��cor felt like the lobby to a professional haunt. It was a small space, so there was no room for entertainment. A unique aspect to the lobby was a wall where customers were welcome to tag their names and thoughts. We couldn’t resist leaving our remarks with: ‘Thescarefactor.com & Team In-corpse-a-rated was here’.

For a small haunt, SkreamZ packs a lot of punch. The organ music stands out in the front office, but music is less noticeable throughout the rest of the haunt, which is ok, because there was no awkward silence as we proceeded in SkreamZ. The scenes were detailed very well. From the front office, we walked through a white claustrophobia tunnel to the puppet master’s room. Life-size marionettes surrounded us, and we knew one of them was going to startle us. The doll hand room surprised us with two giant hands coming at us; we felt like Fay Wray next to King Kong. The life-size Rockem Sockem Robots looked amazing, but they didn’t move. The research and development room resembled a mad scientist’s laboratory, as human bodies were being dissected. The haunt was dimly lit, which gave it a great ambiance. Lighting played an excellent part of the restroom, as the practical bulb flashed on and off, which allowed actors to sneak up towards us.

The theme of SkreamZ was very obvious throughout the haunt, the Laffco Toy Factory. Most haunts we encounter often use the same themes every year, from zombies, to psychotic clowns, insane asylums, mad scientist’s laboratories, hillbilly cannibals, serial killers, and vampire’s lair. We see a few haunts this year using a demented fairy tale theme as well. SkreamZ deserves props for going for a theme unique in the Northern California area, and we felt that it was a refreshing change. Each of the different rooms of the haunt related to what you’d expect to see in a toy factory, but with a spooky spin.

SkreamZ delivers on scares. In fact, Debbie confessed to me that she almost pee’d her pants, when actors that blended in with the scenery came out of nowhere to scare us. What really startled me was the tyrannosaurus rex running full bore at us from the darkness of the inverted balls hanging from the ceiling, because it was huge. The majority of scares used were startles from hidden corners and banging of props. The final scare came from the bunny man wielding his chainsaw, thus chasing us out of the haunt.

The time it took to walk through SkreamZ was approximately 15 minutes. With a General Admission price of $12, we feel this haunt is a real bargain. SkreamZ offers the discount price of $10 to active military, emergency personnel, and students with a valid school I.D. There were no dead zones; all floor space was utilized to its potential. Overall, we would recommend that since it is a small haunt, it’s more worthwhile to customers within the neighboring cities of Fairfield, rather than making an hour plus trip to attend.