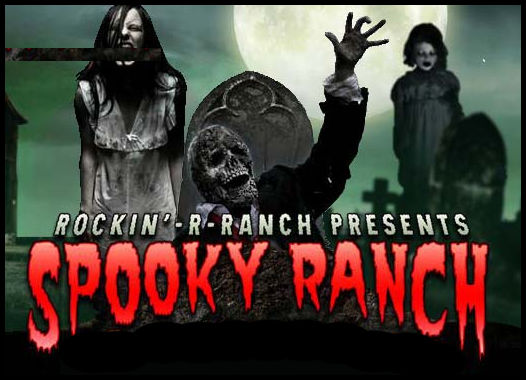 Team Scary Potter and the Hauntwarts Express reviewed this attraction on October 13, 2017.

Ah, a relaxing drive through the countryside ‘ nothing but cool air, an impressive palette of stars and…a creepy hayride with 50 or 60 hungry monsters. Welcome to Spooky Ranch, Columbia Station’s premier haunted destination. Now comprised of 5 different attractions ‘ Extreme Nightmares, Bloodslinger’s Saloon, Monster Vision in 3-D, the Haunted Barn, and the original Haunted Hayride, this season’s fall-frightenings are better than ever. If this Ranch is a-Rockin’, please come a-knockin’!

Extreme Nightmares probably had the best variety of well-performed characterizations overall. Without a minute of entering the attraction, I had made friends with my favorite performer of the night. Sure, she was a bit cold-blooded, but I got a kiss on the first date, so no complaints from me. The young actress who introduced me to my serpentine bride-to-be was excellent ‘ interactive and entertaining. Thereafter, a trio of exchanges with a weird old man (I ALREADY washed my hands, grandpa!), a haunted version of Dee Snyder, and Blood Mary’s right-hand lady were additional highlights. The exterior segment really needed more actors, but Extreme Nightmares had a solid cast overall.

On pain of death, I was instructed to retie an actor’s apron; my reward was being forced to stand in the corner as the proverbial ‘bad boy.’ This gentleman reappeared at the end of the birth canal prop, holding it shut temporarily, and then blowing a kiss as we walked by. I don’t exactly know how to categorize his performance, but it was certainly memorable and unique. A bedroom-bound ‘rough’-houser, and a prop-impersonating fiend were enjoyably bizarre. Importantly, there were goats. Real goats; live goats. We nearly lost Mel to impulsive, irrepressible pettings. Again, and much more noticeably, though, there were long swaths of the walk through bereft of an adequate number of actors.

Our second favorite human performer of the night was definitely Dirty Gus, an interactive coffin salesman desperate to peddle his wooden body bags. With a pet rat in tow, he corresponded with our wagon for several minutes, eliciting multiple laughs, often in tandem with another sidekick actor. The unexpected beggar actress was notable, as were the perturbed youngsters chasing down our wagon at the end. Also : more goats!

We didn’t notice any significant character-breaks, though I really have no idea what Mr. Apron’s deal was. He’s either brilliant or woeful. Every attraction really could have used more haunters injected to fill out dead spaces. Fortunately the crew, in general, was entertaining and believable.

The Saloon had an actor in a Jason mask; we’re still trying to figure that one out. Other than that, we didn’t see any egregious misplaced outfittings. The pink monkeyman in Monster Vision, and what we interpreted to be a giant fox on the hayride were the most unique costumes that we encountered. The various clowns and monstrosities in Monster Vision were appropriately attired and Bloody Mary’s sidekick had impressive make up. Costume quality as a whole was competent ‘ not awe-inspiring, but completely adequate.

Though the Ranch is located pretty deeply in the rural countryside, getting there was easy enough and a great swell of lights from the haunt made it obvious that we’d reached our destination. A handful of park spotters directed us to our spot and we were good to go.

The entrance to each attraction juts off from the main concourse, and are joined there by a food stand (with a fairly extensive menu), a souvenir shop, some midway games, portable toilets, and the ticket booth. All of the staff that we encountered were friendly and helpful, including the owners, queue line ticket holders, and even the chatty tractor driver.

Unfortunately, except for an occasional, brief interaction with an actor who had wondered out of his assigned haunt, there weren’t any line scarers or other forms of queue entertainment. Only the line for the hayride was truly long enough to have really benefited from having some.

Being so far removed from civilization, the dark country backdrop lent itself well to hauntings. Though the haunts themselves each featured thematic soundtracks, there wasn’t any kind of ambient musical stirrings along the concourse. Still, the lively hustle and bustle of the main strip felt energized and rife with anticipation. Each of the three indoor attractions had logical, thematic exteriors that foreshadowed their internal flavors of chaos. Being a more family-oriented haunted environment, the surroundings were toned-down, but still adequately spooky.

The interior set designs were well-detailed for the most part, with a disgusting kitchen and bathroom combination leaving a putrid impression. We really enjoyed a strobe-enhanced attic segment the best, along with an extended dungeon segment. Extreme Nightmares featured the best collection of effects as well ‘ the soundtrack (which is immediately recognizable to fans of Gothic pseudo-soundtracks) fit the atmosphere perfectly and remained omnipresent through the entire interior portion of the attraction. A crazed coffin effect and its subsequent passage and a few brief, dark, ‘sensory’ hallways (though there were probably TOO many dark hallways overall) reminded us that we should be careful where we tread. The climax of the attraction, a large antagonist who we had just been warned about, was certainly the most impressive individual effect of the house (and second overall)

The entrance set piece ‘ a reproduced Old West-style saloon, was well-designed. Amidst an overlay of every conceivable human and in-human extremity, dangling from ropes and hooks, the remainder of the scenery was decent as well. The ‘fowl’ man-amatronic was quite voracious, shooting forward with a bloodthirsty fervor not usually achieved by similar effects. Whoever was controlling that particular effect did an excellent job. Accompanying banjo twang provided expected musical backdrops.

Another attraction, another great soundtrack. Though brief, the Monster Vision haunt had a few well-constructed room : the dot room, with its particular startle was creative, as was the upside down room and its convulsing, gravity-defying animatronic. The finale was impressive, as well, roaring a very definitive ending to the attraction.

Rolling along in the wagon, we were impressed by several of the scenes that passed by, but a massive dazzling ‘forest of a million green lights’ was our favorite ‘ it was simple but dazzling. The graveyard, with its pillar-perched skeletons, the undead pirate ship, and the saloon/casket shop area were nicely detailed. The giant troll monster and pumpkin-headed beast near the beginning were imposing, as was the agitated rat animatronic, but a pair of effects really stood out. First, a barrel that spontaneously ignited, launched a stream of fire heavenward immediately caught our attention, but a little bit of ‘toilet humor’ later on left us with cold feet (and everything else). We have experienced similar effects at haunted attractions before, but Spooky Ranch definitely amplified the startle’s ‘output’ tenfold. The Hayride may need a splashzone warning on colder nights!

The Barn, though brief, tops off the hayride with a truly unique finale. One of its denizens is the most spectacular of the ranch, and one of the most impressive foul fire-breathers that we’ve seen anywhere. We would have liked to have understood what the audio track was saying, but the musical cues that followed adhered to the dramatic flow of the scene and the hideous creations inside the barn could pretty much speak for themselves.

Spooky Ranch excels at provided eerie and compelling musical soundtracks to their attractions, has well-fleshed out sets, and more than a few clever, mechanical tricks up its sleeve.

The themes used by each attraction (barring the hayride/barn, which forgoes one) were quite broad, so maintaining logical thematic elements within the attractions wasn’t very difficult. However, the Saloon really felt like more of a ‘Slaughterhouse’ style feature, than one catering to Wild West motifs, excluding the very first room. I suppose the two aren’t necessarily mutually exclusive, but a different name would have been fitting or some moderate changes to the sets and characterizations into a more appropriate design.

Additionally, for some reason, a character in the Saloon was wearing a Jason mask. Even if we allow for the aforementioned cross-bred theme, I can’t imagine how Mr. Friday the 13th would fit into that world.

Extreme Nightmares is mostly a ‘things you’re afraid of’ kind of attraction, which could really apply to most haunts, and Monster Vision featured all variety of monstrosities ‘ clowns, aliens, etc.

As a more family-friendly attraction, Spooky Ranch leaves the more extreme variations of scaring on the cutting room floor. Instead, Spooky Ranch features a broad range of interactive, creepy actors, plenty of startle-jumps, and a plethora of animatronic shocks.

Spooky Ranch did turn up the haunted heat a few times, though : a simulated execution during the hayride didn’t go quite as planned and resulted in a very angry escapee, and the barn finale (if seated on the proper side of the wagon) can be pretty intense. My favorite scare, though, was a personal fright ‘ I was instructed by a monster to enter a dark room alone. After following his orders, a moment passed as I waited in the complete darkness. Suddenly… well, try it out for yourself. The actresses involved in the scare did a great job and generated some very impressive, uh, vocal chaos.

Including that intentional singling out, Spooky Ranch did a good job of distributing frights across most of our group. Though not wildly terrifying, the attractions from the ‘Extreme’ ticket package ramp up the scares just enough to whet the appetite of thirsty haunt-goers.

The standard adult package is $20 and includes the Hayride/Barn and Monster vision. Combined, we spent 24 minutes on those attractions, making the minutes of entertainment per dollar spent 1.2

The extreme adult package is $25 and adds Extreme Nightmares and Bloodslinger’s Saloon. In total, that makes 42 minutes of entertainment and a 1.68 ratio.

Each attraction offers a different experience and a little something special so we recommend the extreme pass to enjoy all of them. We enjoyed Extreme Nightmares and the Hayride/Barn the most as is probably evident from this review, but Bloodslinger’s still had a lot going for it. Monster Vision was a enjoyable, if brief, experience as well.

We had a great time visiting Spooky Ranch this season and are confident that you will as well ‘ just make sure to bring a raincoat!

Kristi – 10/10 – October 13, 2017Something for everyone haunted hayride was the best. Extream nightmare haunted house may be to …show more scary for some but it was the scariest. Old west haunt was coool And 3-d haunt was off the hook clowns and more scary clowns. Great value. Scream park you could spend an evening there. Extremely talented designers. We can’t wait to see new stuff for 2018. SpookyRanch ROCKS.