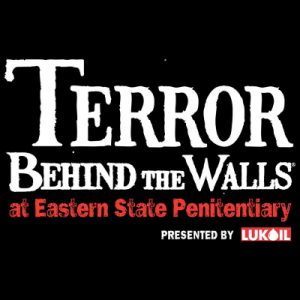 Prison is no walk in the park, especially when the residents inside have either escaped, turned into zombies, or taken over and decided they are tired of cheese sandwiches and wanna try some human flesh. Trying to fend off the dead, the living, and the extremely well protected is no easy task but that is what you will have to do if you decide to venture through this old prison during Halloween time. Eastern State Penitentiary transforms into a six themed haunt once the night air starts to chill, inviting guests in to chance their survival within their walls. Its architecture is beautiful and chilling at the same time, and the use of its space is extremely well done. So, do you dare enter this prison? If you think you are brave enough, then get ready to experience some real terror behind these walls.

It’s not just the inmates that you have to watch out for here, but the guards, nurses, everyone in this Hell has turned into a force of evil out for blood. Zombies, crazies, cannibals and even a monkey are out to kill some fresh prey. The interactivity level depends on whether or not you opt in for a glow necklace, that tells the scaractors that you don’t mind, nay, that you want to be touched. The scaractors did a good job at keeping the interactivity going, even for those who didn’t get a glow necklace, just with less touching for those individuals. A good portion of the scaractors had high energy and stayed in character the entire time. The two areas where dialogue was top-notch were the Blood Yard and the Infirmary. In Blood Yard, the maniacs were a cross between Mad Max post-apocalypse heathens, and voodoo bayou priests and priestesses, who kept threatening to eat us, going as far as to salt us.

The costuming department did an amazing job here with their scaractors outfits. Everything was complete and authentic to the character and the scene. The riot guards were fully covered in riot gear, the nurses looked like old-timey hospital nurses, and the Blood Yard scaractors all looked like they picked the yard clean for scraps and turned whatever they could into armor and clothes. Not too many masks were used in this haunt, and the few that were worked nicely for the scaractors wearing them.

Even though there were stairs, inflatables, slides and ball pits, everything was safe, and had either a security guard or a scaractor watching over each and every “obstacle” to make sure guests were safe. The haunt is ADA accessible, so those little interactive parts shouldn’t deter anyone. The haunt is located in Eastern State Penitentiary, a giant abandoned prison, so it is easily noticeable as you drive down along the main road, or even one of the back roads. We noticed one of its pillars from about 2 blocks away. Outside there were roaming scaractors who interacted with guests, as well as staff who were dressed as zombified security guards. Every once in a while, a dance troupe would come out and scare/entertain guests with a dance routine on the main line before you enter. There was one scaractor interacting with guests on the line for Blood Yard. The staff here is numerous and visible, as well as friendly and helpful.

The building itself is enough to make guests tremble before even entering. The tall walls, covered with foliage and years of wear give guests a nervous feeling in the pit of their stomachs. Two gargoyles sit atop the entrance as a warning to passersby’s, and the eerie music assures those waiting that nothing good can come from this prison stay.

Inside, you will find a mix of animatronics, scaractor welded weapons, interactive sets, and other fun things. Ball pits, slides, loop arounds, this haunt uses a lot of interactive pieces to make guest work a bit for their scares. The lighting shifts from dim and dark to neon and fluorescent, all with expert touches. Shifting floors and falling walls make for uncertainty in the terrain and surroundings, but still in a safe manner. A new addition this year was a laser grid in their long hallway, making guests bend and stretch over and around these red lights, or else an alarm would go off and ghouls would come out and torment the unstealthy guest. I loved the long corridor before, but admittedly it was time for an update, and this was a great and simple touch.

One giant prison, six different themed locations within. This incarceration station houses the dead, the crazy, and the weird. As a guest, you will get to play with all of them! Each theme is separated into its own section, with no overlapping between them. Each is detailed and done with great skill, showcasing great costumes, fun sets, and interesting scares. Machine Shop is the most original out of all of them, since you will most likely find a hospital theme, a jail theme, a 3D theme, and a cannibal theme in other haunts. But where else will you find license plate stampers and other fun machine related scares and props? Okay, I’m sure you can, but it’s harder to find that than 3D clowns. Since this is all done within an actual prison, the haunt’s location authenticates the themes pretty damn well.

With the option to be touched thrown in, the scares here become a little more involved. From the typical jump outs, to being hit in the chest with a fake sledgehammer, you don’t know what to expect around each corner. The cast here make sure to go after everyone in the group, and are actually very good at stopping themselves from touching the guests who choose not to be touched. There is a decent mix of animatronic, jump out, and decoy scares in here. The finale differs from person to person, since you can be pulled into one or even two separate interaction points before finally getting out, but it is pretty good. Not super scary, but a good way to end the haunt.

Overall it took about 35 minutes to get through the haunt, which is a good chunk of time to be stuck in prison. Depending when you go, tickets can be as cheap as $25, but that is early in the haunt season and during weekdays. The highest the normal ticket price goes up to is $50. The $50 ticket price is a bit steep for 35 minutes, but it is amazing to even just see the inner workings of the prison at night, then add in the great scaractors, the detailed sets, the interactive parts, and you will have a fun time. There are skip the line options, as well as what they call the Hex Challenge, which adds a whole new layer to the haunt for guests bold enough to try it.