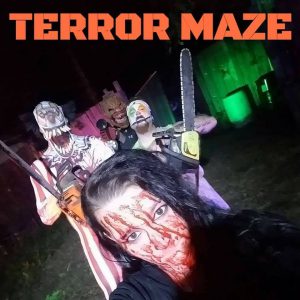 Terror Maze has a passionate crew that comes back year after year just to terrorize the Hell out of you. On average, they have anywhere between 35-40 cast members working on nights that they are open. Many of them have been a part of the haunt for many years and we can tell they have experience by their dialogue and ability to keep your attention by interacting with you. Each cast member plays key roles in their scenes and they execute this well. At times, there would be dead spaces where we would have loved to see another person. However, there would also be times when we would see the same person a few times and we were like, “Wow… that was fast! How did they do that?” One of our favorites was the cast member in the “door” area. He had to do multiple things to keep that scene alive and he was able to manage. My person favorite was Tipsy the Clown. He stood so still I thought he was a prop and then, when he moved, I was like a kid on Christmas with excitement that he was real. 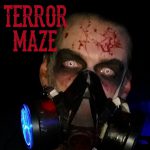 Norma – 7/10 – November 3, 2018We went on their last night open which was their Black Out Night. Some parts of the trail were very …show more dark and we got disoriented several times. This was our first time at this trail so we didn’t know what to expect at all so we were startled quite a few times. We aren’t sure how all the scenery and costuming looked since this wasn’t a normal show but it was worth the ticket price. We had a great time! We went to the haunt across the road on the same night and it seemed like this one had more characters but it was hard to tell for sure due to the dark. If you’re in the area, definitely stop by for a visit!