Terror Under the Bridge

Terror Under the Bridge is a Haunted Attraction located in Myrtle Beach, SC. 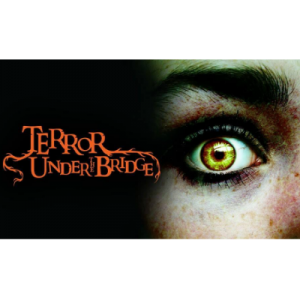 The crew of Terror Under the Bridge have been around for over a decade, appearing each Halloween season to provide scares to the Grand Strand, and this year is no different. Over the course of several years, Terror Under the Bridge has changed locations, but they are still dedicated to scaring folks and giving back to the community. Terror is a volunteer-staffed haunt that donates money to local charities. While it may not be a big budget production, they work hard to put on a unique experience that is enjoyable.

There are nearly 40 volunteer actors stalking the dark and twisting passages of Terror Under the Bridge. From crawling contortionists and spooky seamstresses to devils and doctors, there are a variety of different characters ready to get under your skin. Actors are interactive, whispering all manner of disturbing things in your ears, screaming at passersby and moving around you while you traverse the haunt. There is some light touching that you will experience – from other victims grabbing at your ankles to a bloody doctor almost endlessly caressing your skin (whether you have an appointment or not).

The costumes for the volunteers are somewhat mixed with lots of jeans and t-shirts scattered around. However, there were some astounding pieces that we enjoyed – the flesh seamstress, the doctor, the stripper and the pig mask-wearing butcher were all very well done. There were a few extraneous clowns scattered in places through the haunt, but most of them were the silent and menacing type.

The doctor who provides queue entertainment is frightfully delightful and there’s staff members taking pictures of visitors as well. The staff are a friendly bunch who work diligently to provide entertainment and answer questions. You travel through the haunt with a guide, so there is always someone on staff nearby. Inside the haunt, there were a few occasions where you really had to watch your step – long strands of spider webs, power cords and the occasional crawling victim or undead zombie can get underfoot or tangled up around your legs.

Terror Under the Bridge is located in a commercial district next to a family gym. There aren’t a lot of indications outside the haunt to pull you in, but once you’re within the front door and getting your ticket, the queue entertainment starts to really take effect.

Terror Under the Bridge has some interesting effects inside. There is a passage filled with spider webs, the sewing room where faces are being stitched together, a madman with a gas can and a sparking prod. Most of the props and scenes are built with a minimalist sensibility (relying on actors to drive the scares), but luckily, the actors here deliver. There are details scattered through the scenes, but they are best when the actors are pushing the interaction.

Terror Under the Bridge did not operate with a theme this year, though they have in the past.

Scares tend to be focused on the front to middle of the groups being led through the scenes, so be sure to put your scaredy-cat friends in front! There are a variety of different things going on as you pass through the scenes, from distractions to actor interaction, but don’t lag too far behind your guide if you want to see the best of the show.

Terror Under the Bridge is about a 10-minute walkthrough. Tickets are $12 per person – that’s 0.83 minutes of entertainment per dollar spent (a bit below average) – and fast pass tickets are $25. A portion of each ticket goes to charity and, if you get your picture taken, you can find it online later for free. If you’re in the Myrtle Beach area, be sure to stop by Terror Under the Bridge and do some screaming that benefits the local community.