The Dark Path Haunt is a Haunted Attraction located in Denton, TX.

Free Parking, You will NOT be touched, Uncovered Outdoor Waiting Line, All-Outdoor Attraction

Team Nightmare in North Texas reviewed this attraction on October 21, 2017.

The Dark Path Haunt is an outdoor trail haunt that is located in the woods across from Goatman’s Bridge in Denton, Texas. It is said that the area surrounding The Dark Path Haunt has been home to various murders, disappearances, and ghost sightings, peaking the interest of paranormal investigators.

The cast did a great job of providing scares at just the right time and working with their surroundings. Being located in the woods, the cast has ample space and hiding spots to time their scares strategically.

The cast were always in character and were very professional in their roles. There were enough actors throughout the haunt to keep it exciting. One of the cast members that stood out was a girl wearing a white dress with long black hair crawling creepily on the floor. Another was a monster that had a sound machine attached that made scary roaring screams.

The costumes at The Dark Path Haunt are very elaborate and well executed. The actors are fully decked out in costumes with masks, makeup, and wigs. The characters that wore cloaks with animal masks on were a highlight for us. There was also a character in a full black morph suit that blended in with the darkness. You can tell that the haunt takes great pride in their costume and makeup department.

Once we entered the haunt, the ticket booth was clearly marked. Tickets are available onsite only; you cannot purchase tickets in advance online. The haunt accepts cash only and they do have an ATM available next to the ticket booth. They offer regular and fast pass tickets. They do offer discounts to active duty military and first responders, as well as larger groups. There is more information about the discounts on the home page of their website.

There are port-o-potties located across from the ticket booth once inside the haunt grounds. There was not any merchandise or food available for purchase.

The Dark Path is located in the dark woods which makes for a unique atmosphere. You are only allowed one lantern per group which makes for a spooky walk through. Upon entering the haunt grounds, there wasn’t much going on. It would have been nice if there were some actors out and about in the area where you buy tickets.

There were a couple of actors around when we were waiting in line to get into the trail; a grim reaper and a man crawling around on the ground through the line. The grim reaper was providing scares and taking pictures with customers. We would have enjoyed the wait more if a few more actors were around or if some music/sound effects were playing to add to the experience.

Be aware that you are walking through a trail in the woods. Therefore, you may encounter uneven ground, tree branches and bugs while you are at this haunt.

The props and scenes used throughout the trail were nicely done. The sounds and effects are mainly created by the actors. The use of loud noises such as banging on metal props, the dialogue and the actual noises that the actors were making were very effective.

The haunt uses its surroundings (the woods) as its main effect. The props they did use such as a wooden maze and simple scenes with skulls and candles were nice touches. They also used a fog machine at one point, which makes the walk through the dark woods even more frightening.

A scene that stood out to us was a wooden wall with an actor sticking out of the front of it all bloody and moaning for help.

The theme of The Dark Path Haunt is based upon the legend of Goatman’s Bridge; which is located across the street from the haunt.

According to the haunt’s website, a goat farmer named Oscar Washburn and his family moved just north of the bridge around 1900. He was known as a dependable, honest business man and soon became endearingly known as The Goatman to North Texans. One night, a group of jealous men took The Goatman from his home, brought him to the bridge and attempted to murder him by hanging him by his neck over the side of the bridge. The men looked down and saw the rope, but nobody attached to it. They quickly retreated and then proceeded to murder The Goatman’s family by burning down their house with them trapped inside. Since then, people claim the bridge and surrounding wooded area is haunted by The Goatman.

The costumes and props used along the trail match the overall theme of the haunt well. They had scenes that involved farmers gone mad, The Goatman and other creepy creatures.

You are given a single lantern per group to lead you through the trail. If you are afraid of the dark or of being lost in the woods, this is the place for you to go if you want a great scare. Since it is so dark and there are so many spots for the actors to hide, you are sure to get some good startles. Even though you expect them to jump out at you at some point, it is very unexpected when they do it. Sometimes there are even actors creeping up behind you without notice.

The eerie quietness of the woods adds to the intensity of this haunt. Even though you are in a group and you probably will not get lost as long as you don’t leave the trail, the feel of this haunt is as if you are in a horror movie trying to get away from the monster.

We did wish there was a grand finale at the end of the trail, it just kind of ended.

The overall value of the experience of The Dark Path is worth the price to us. The walk through time was approximately 25 minutes for our group which can vary.

Overall, we would recommend visiting The Dark Path Haunt this season. It is unique in setting and the costumes are a must see! 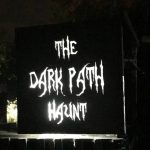 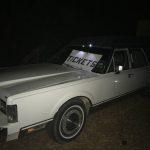 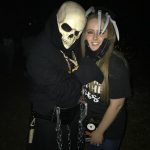 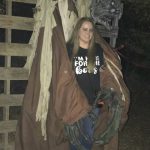