Tucked away, just outside the little town of Bellefontaine, lies a quaint little apple orchard that has opened its fields up to guests during the Halloween season for the past 10 years. They call this event “The Haunted Orchard” and it is a mile-long haunted trail through the apple trees and several trailers that they have decorated as different scenes. However, don’t be misled, as we were, and think that this is just a cute little jaunt through the field; they are definitely out to scare you and do it very well!

This year, they have added a 15-minute laser tag game: “Shoot Out.” They also added an escape room.

The Haunted Orchard is pretty good at dealing with terrified kids, but you may want to use some discretion on this one. They are pretty intense and have quite the fondness for chainsaws. Our personal recommendation, as parents to three children of varying ages, would be 13+. They are allowed some light touching, which is very respectful (no shoving or groping) and, if the kids are in a large group… they can still get the full effect of any scare. So, you have been warned.

The cast here is INTENSE and they hit you from EVERYWHERE. They can be a bit sparse between the various trailers, but the trailers are definitely loaded and ready to scare. The only time we caught any of them dropping out of character was when he terrified our youngest and she ran. He stopped and dropped character in an effort to help her calm down. We aren’t taking any points away from that because, as haunters we love a great scare… but we have no interest in traumatizing little kids and scaring them away from haunted houses in the future. We actually commend actors for knowing when to cool off of kids. They are also very interactive, both verbally and physically. Don’t be surprised if you get a chainsaw bar run up your leg.

Without any really certain theme, judging the costuming is a tad difficult. So, we are just looking at it as if the theme was “Scare The Crap Out Of You.” Under that pretense, the costuming works. They utilize a lot of masks which, on some of the smaller haunters (children), are a bit large. The makeup work was about average; it wasn’t spectacular, but it wasn’t horrible either. Jay, The Killer Clown and Pennywise were done extremely well and the guy wearing the Michael Myers mask had the proper build to pull it off.

They have a sign out front near the road, but we still managed to drive past them the first time because they are shortly after a curve and we didn’t see the sign until it was too late. But, after turning around, we arrived and were directed where to park and where to get tickets. They have port-o-potties in two places and a nice little camp fire was burning in a barrel in front of the ticket office surrounded by a bunch of overturned apple crates for seating. All of the staff there was FANTASTIC. Amy helped get us set up to play Shootout and, when our two youngest kids were deciding whether it was time to tap out or not, a security guard by the name of Abe came by to try and help them get through it. When that didn’t work, he gave them a ride down the hill in his truck and had them waiting for us at the bottom.

There are a few safety concerns that we discovered. Some of the trailer doors are propped open with metal rods (which got Katie once) and the steps can be a little tricky to navigate in the dark. Since this is all outside, they are subject to weather conditions and the last section of the trail gets pretty slick when it gets wet, especially when combined with fallen leaves. But, this IS outside and you should prepare yourself for that.

Before you take the hay wagon (or ambulance, for speed pass holders) ride to the top of the hill, you are just in a quaint little bonfire-esque gathering place. People standing around chatting to each other as they prepare for their trip down the trail, or sitting around the campfire to keep warm. There is no music and the costumed individuals were directing traffic. It is all very quiet and laid back. The signage and decorations let you know that you were about to enter a haunted house, but the atmosphere while waiting was the complete opposite of what it was once your hike begins. This is probably by design, because it was actually pretty nice to sit by the fire and relax after the haunt was over.

The trail runs through an apple orchard and several trailers, so there isn’t really a lot of room for major special effects, but the rooms that had them used them well. A couple of the trailers had a soundtrack playing to help increase the ambiance. The scenes had a fair amount of detail to them, but could have used a bit more. They could have also used a little more lighting, primarily near the entrance/exits of trailers and to highlight some scene elements. Of course, they may be a little limited based on the nature of the trail. However, they did do exceptionally well with what they had, though.

This haunt does not have a set theme.

As we said before, this place is INTENSE. They do a great job of getting scares; however, they tend to focus on the easier targets in a group. So, if you want to receive more attention, leave the younger ones at home or let them chill by the campfire. The actors out here are also really good at distractions and getting you from some very unexpected places. Don’t be surprised if someone drops out of the ceiling at you!

It took us around 30 minutes to make our way down the trail and, with a General Admission ticket price of just $16, that gives them a Minutes Per Dollar Value rating of 1.86… just above the average of 1.50. They also offer a VIP Speed Pass for $25, which earns you a ride to the top of the trail in an ambulance instead of the hay wagon. We feel like you DEFINITELY get your money’s worth at the Orchard and would also recommend the laser tag game; we all had a lot of fun with that as well. 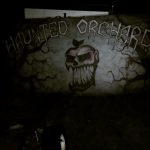 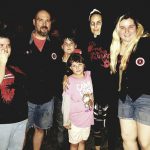