The Massacre Haunted House is a Haunted Attraction located in Montgomery, IL.

Sometimes you just can’t judge a book by its cover, or in this case, a haunted attraction by its location. Located in a nondescript strip mall, right next to Dollar General no less, Massacre Haunted House proved to us that location doesn’t mean everything, its whats going on INSIDE the attraction that really counts. Massacre is 20,000 square feet of terrifying fun with 3 separate attractions and an escape room! This is a must-see haunt that should be very high on any aficionados list of Chicago area attractions.

One of the most common problems we see when touring haunts, is that often times there just aren’t enough actors, thus resulting in actorless dead-spaces. Fortunately, we didn’t find this to be the case with Massacre, as they have 100 plus actors on staff each night, which seemed to fill the attraction perfectly. Each scene had at least one actor and quite often there were several. Additionally, there were also a few actors who would pop in and out of different scenes, which made it feel as if they were following us through the entire haunt. The cast as a whole was quite excellent, with a high percentage of the performers absolutely nailing their roles. The energy level displayed by the majority of the characters was quite high. We noticed several actors running around like lunatics from room to room which made us wonder, ‘how on earth can they keep this up all night?!’ We heard some pretty creative dialogue with the cast speaking their lines quite convincingly. We especially enjoyed the actors who we had extended interactions with. Their ability to have ad-libbed conversations with us while staying in character was very impressive. We have to give kudos to the pig man and the guy with the protruding gnarled teeth who kept popping up out of nowhere.

The costuming and makeup work was very well-done and in many cases top notch. Everything looked professionally done and custom made for their character. We noticed at least adequate cosmetic attention to all the characters, not just the featured performers. We also noticed that colored contact lenses, professional quality makeup work including prosthetics, Hollywood quality masks, and custom-made attire were the norms. Most of the costumes looked complete, believable, and all seemed appropriate for their character’s role.

You should have no problems finding Massacre with GPS, as long as you know that the entrance is actually in the back of the building. Free parking is located in a large, well-lit paved parking lot. The indoor waiting is a nice bonus, especially on cold or rainy nights. There are port-a-potties on site, as well as a gift stand and concessions. The staff was friendly and very helpful with answering our questions.

Massacre is located in a strip mall, right next to a Dollar General and if it wasn’t for the crowd gathered outside, we might not have known we were at the right place. The entrance is actually located on the back of the building from the parking lot and we had to walk through a long grassy lot along the side of the building to get to it. While the outside of the attraction leaves a lot to be desired, the inside was an entirely different story. A nicely detailed gothic castle-like facade and atmospheric lighting and music set the mood just right, which really helped to prepare us for our tour.

We came across many lavishly detailed sets such as the funeral scene, doll room, jungle, and the scene with the airplane. There were also some highly creative scenes that got bonus points from us for their originality like the spinning room, the bridge and the room that was tilted at a 45-degree angle. We noticed an impressive array of animatronics that we felt were on par with some of the best we’ve seen. The lighting and sound effects were spot-on throughout our tour. The lighting, in particular, was absolutely perfect, never too dim or too bright. There were a lot of nice touches lighting wise that you just don’t see too often in haunts like the little-LED lights we noticed in several different rooms. We love when an attraction goes the extra mile with these types of things and feel it’s all part of what sets the better haunts apart from the standard haunted attractions. The 3D portion of the tour was one of the best we’ve seen and had some of the most innovative scenes we have ever witnessed inside a 3D attraction.

N/A
This particular haunt does not follow a single theme.

Because our review team tours 25-35 different attractions per season and have seen just about everything, our review team is quite difficult to scare. But Massacre was certainly up for the challenge as they dished out a smorgasbord of effective fright techniques. There were several clever environmental and animatronic scares that we found to be quite effective, but our favorite frights by far we those provided by the actors themselves. The cast was great at delivering distraction scares in which something or someone would get our attention and bam an actor would deliver a great fright when we least expected it. There were so many excellent hiding spots for the actors to pop out from, that we felt like we were being ambushed over and over again. We also experienced some great creeping followers and menacing stares. But the best of all the actor-driven frights came from the cast members who kept popping in and out of scenes. There was one actor, in particular, that got us numerous times, actually more times than any single actor has done so far this season. This guy kept popping up outta nowhere, again and again, delivering effective scares one after another. So we’d like to give a shout out to the guy with the protruding gnarly teeth with the fingers that made clicking noises, you sir were outstanding!

General admission is priced at $25. The cost of a VIP Fastpass is $35 and is highly recommended on busier nights when the wait in the General Admission line can be upwards of several hours. From start to finish it took our group 25 minutes to complete our tour, for a MPD (minute per dollar) score of 1.0. We feel this is an excellent value when considering the high quality of the entertainment and the fact that Massacre provides a longer tour than most haunts in the area. We can’t wait to see what this attraction has in-store for the future, we will most definitely be returning to see what this quality attraction has planned next! 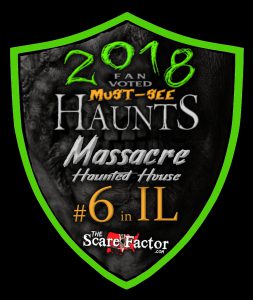 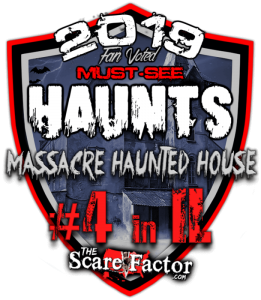 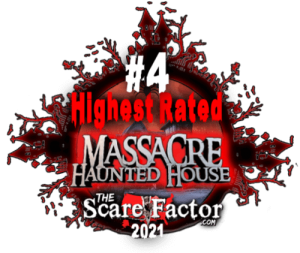 Alicia Pequignot – 10/10 – October 15, 2022It was really terrifying I’ve never been to a haunted house before and I didn’t really think I’d be …show more scared.

Sofia – 10/10 – February 12, 2022honestly it was a great experience, it was pretty long for a haunted house and the workers are funny …show more and nice and they are always in character. And i loved that we didnt have to wait outside. I will definitely be coming back again.