The Shallow Grave is a Haunted Attraction located in Winter Haven, FL. 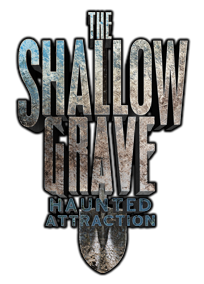 THE SHALLOW GRAVE enters their final season of spreading fear around the Central Florida area, gaining national attention as one of the top haunts in the country. Unfortunately due to a number of unfortunate circumstances, this year will mark their final season in Winter Haven, FL.

Fortunately, although knowing they were sealing the grave after the 2017 season, they didn’t hold back and exceeded the quality of previous years, continuously making massive updates, additions, and changes each year. PAVOR NOCTURNUS, though mostly a similar layout to years previous, still has enough changes and tweaked effects that it will still cause a return Guest to buckle in fear. BETRAYAL however, is massively remodeled and updated, and after passing the same fa������ade as the past years, a large portion of the attraction is completely different or unrecognizable from previous years. Even in recognizable scenes from last year, scares and effects are totally different making it a completely new experience.

If this is your first time hearing about THE SHALLOW GRAVE, go before it’s too late! If you have been before, get down to Winter Haven. It’s a completely new experience from past years, and not to be missed.

The cast of THE SHALLOW GRAVE aggressively demands scares. Their commitment to getting scares is strong, providing chain reactions of jump scares in between all of the special effects and animatronic effects.

Character types range from creepy distraction actors to aggressive and attacking performers. Team Thaddeus in BETRAYAL creates a great chain of scares making you believe that he his truly around every corner without ever seeing multiples.

Though THE SHALLOW GRAVE is a touch haunt, it is not over utilized, so it is almost forgot about until someone reaches from the wall and takes a firm grasp of your bicep or reaches from the ceiling to brush your hair with their fingers. These targeted touches are far more effective and scary than haunts that touch everyone that passes ‘just because they can.’

The characters outside the haunt are just as dedicated to scare and creeping as those inside the haunt. The possessed girl will follow you around trying to convince you not to enter the haunts, and a man with a python walks around preying on anyone with a fear of snakes. Perhaps the best character was a lady serving her husband for dinner, literally. She carries around a casserole pan filled with pieces of her husband. Her scares were effective, but even more superior was her improvisational skills and witty banter with Guests in line and vendor areas.

Costuming at THE SHALLOW GRAVE is complete, detailed, and the precise attention to detail pushes the aesthetic of the haunt to the next level, matching the scenery and entire experience as a whole. With the introduction in the past couple years of makeup lead artist Scott Fensterer (seen on SyFy’s FaceOff and Game Face), the makeup at this attraction has gained prowess, one of the many reasons that makes THE SHALLOW GRAVE among the top haunts in the country.

Characters with masks are well mixed in with those in makeup so as to never over saturate a haunt with masks, which can often times become a detriment. Thaddeus at times can look a bit rubbery and inorganic in his facial movement due to his mask, but fortunately is seldom seen for more than a few seconds during jump scare moments, so it becomes mostly forgivable.

Perhaps the most impressive and thorough overall character appearance is that of the character in BETRAYAL performing a surgery-like operation on a corpse. The costume, makeup, and detailed accessories give this character a stunning appearance along with a solid performance from this performer, being the perfect distraction element in the scene.

THE SHALLOW GRAVE is a very well established haunt, having operated for several years now. The haunt undergoes rigorous testing and inspections proving it to be a safe experience for Guests and Cast/Crew alike. Because of this there is never a fear of true danger in the attraction.

The Staff, Cast and Crew are all pleasant and enjoyable, including the ticket booth and queue attendants. While waiting for our turn to enter the attractions, the ladies at the front of the queue were interactive and chatty, making the experience more personable and enjoyable.

The attraction is easy to find, with ample paid parking, and easy to navigate, including a sheriff present for added safety especially when crossing the busy road.

THE SHALLOW GRAVE is located in a warehouse style building with the queue on the loading dock. While this doesn’t directly relate to the theme of the attractions inside, the team does a great job of creating a spooky atmosphere through characters and scenery in the lot surrounding the attraction.

There are several photo ops that have been added for 2017, a fun choice while Guests try to catch their breath and let their heartbeat stabilize between the attractions. There are also a couple vendors selling food and beverages as well. Large animated figures flank the ticket booth making a bold entrance statement and through lighting and sound effects as well, there is no doubt you are about to enter a haunt.

THE SHALLOW GRAVE has added a bunch of atmosphere characters for 2017, helping to set up the haunt and introduce the scares and spook you’ll encounter inside. These characters, spook, creep, lurk and scare as well as interact with Guests as they arrive and during their wait in the queues.

We challenge you to take more than a few paces without coming in contact with some sort of special effect in THE SHALLOW GRAVE. Featuring more animatronics than Walt Disney World, and more special effects than can be seen at an entire theme park haunted attraction, there is NEVER a dull moment once you enter the doors. In between every actor scare, there are at least a handful of special effect scares, distractions, or eye candy.

Featuring everything from massive puppets to well used traditional effects, state of the art animatronics to a well placed lighting fixture, THE SHALLOW GRAVE packs a punch, and truly ‘spares no expense’ to put forth the best experience possible.

For the past several years, Thaddeus and his horrific history have played out at THE SHALLOW GRAVE in two original attractions. Strong back story to the attractions prepares Guests for what they will experience. While the theming of PAVOR NOCTURNUS is not the most original, as phobias and nightmares are often capitalized on in haunted attractions, the layout and journey taken through the attraction leading to the finale makes for a creative and original take on the theme, a welcomed deviation. While the exterior of the building isn’t a perfect match for the themes of the interiors, being two very different themes in close proximity, creating a general scary atmosphere is a good choice and the run down warehouse building is a perfect setting for these haunts.

Front, back, above, below, they’re out to get you from every angle at THE SHALLOW GRAVE. An opportunity to scare is never missed in these haunts, and the intensity is strong from start to finish with relentless aggression and strong scares throughout. Strategically utilizing their ability to touch and brush against Guests, THE SHALLOW GRAVE has found a way to maneuver through all of their Guests’ senses besides taste, thankfully. But let’s not give them any ideas.

Scare locations are perfectly disguised and hidden with minimal scares ruined by an obvious performer or effect location. This being said, unfortunately the finale scare in BETRAYAL was spoiled by a performer not hidden by the time we entered the room. There were a couple (very few among the myriads of special effects and animatronics) that were obvious towards the end of BETRAYAL due to lack of distraction in the scene and opportunity to look around and spot the effect as well as the sound of pneumatic build up before activation. Again, for a couple effects out of truly hundreds, this is very impressive.

THE SHALLOW GRAVE is also featuring a blackout experience on its last weekend, allowing you the distinct terrifying pleasure of navigating the attractions with only a glow stick to guide you.

THE SHALLOW GRAVE has two haunts, and while not extremely long (about 14 1/2 minutes), both are of a length longer than the average in Florida, filled with theme park haunts topping out at a sad average of 4-5 minutes. This being said, the houses are so action packed and filled with scares, effects, and eye candy, that the short walkthrough length feels much longer. For those interested in venturing through these attractions twice, the option is available on select nights. There is also a combo ticket available in conjunction with CHAMBER OF TERROR (see separate review), a short drive away.

The ticket price is average for most independent haunts while delivering one of the strongest haunts around. Not a corner goes untouched in these attractions, with no wasted space inside the haunts, utilizing every inch of this 13,000 square foot building to its best potential.

If you are looking for a bang for your buck, take it to the GRAVE!

Lynn – 10/10 – October 31, 2015Forget the long lines at the big name parks, The Shallow Grave has the best in your face scare …show more factors that I have ever experienced. New year new fears.

Scariest Haunt in Florida (Given by: Team Giraffic Shark)