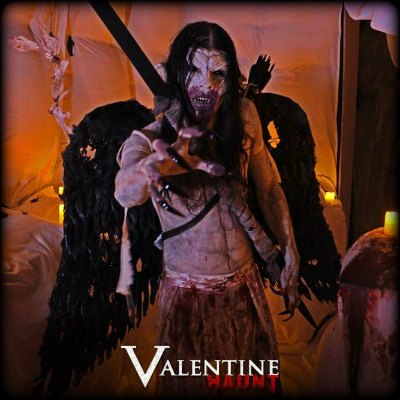 For several years, we’ve attended Fear Overload Scream Park in San Leandro, CA but we’ve never gotten a chance to see their sister haunt, Ultimate Terror Scream Park in Sacramento. For the Valentine season, Ultimate Terror has rebranded themselves as ‘Valentine Haunt Sacramento’ while Fear Overload is rebranded as ‘Valentine Haunt San Francisco'(San Leandro is less than 20 miles away from S.F.). Valentine Haunt Sacramento has similar music and scenery as Fear Overload, featuring loud and intense music, realistic yet grimy and bloody walls, actors startling us from all directions, and mutilated bodies throughout. Whether you live in the Bay Area or Sacramento, you will get a similar show, which is not bad.

The cast of Valentine Haunt Sacramento was very ‘gung-ho’ about their performances, with the majority of them being either vampires or zombies. I only caught one actor who broke character and started giggling after startling us; but, overall, the actors were very intense. None of them engaged us in conversation, but several did walk up into our personal space to intimidate us. One actor made bizarre grunting and snorting sounds as he walked up close and personal. The actors hid behind scenery pieces and corners right before they lunged at us. A few actors also remained stationary, as they fed on the corpses of those who’d gone before us.

The costumes in the haunt seemed intentionally designed for Valentine’s Day. In particular, many actors were dressed in traditional Dracula costumes. This did conflict with the scenery, however, which was very modern in terms of bathrooms, showers, operating rooms, and private residences’ most of which can be attributed to this being an off-season event. Having said that, the costumes were put together very nicely. Another common costume used for several of the actors was scrubs. The makeup for the actors was professionally done. There were several actors whose makeup had personal touches, like blood markings on their foreheads or metal implants in their mouths. A few even had occult markings, like pentagrams. It’s worth mentioning that there was one really unusual costume: a teddy bear suit. We assume it was a reference to the ‘Five Nights at Freddy’s’ video game.

The main source of atmosphere outside of the haunt was the music. They were cranking heavy metal from artists whom have creepy personas, like Marilyn Manson and Rob Zombie. The loud and intense songs foreshadowed the intensity inside. The music and banner were the two main focal points that called attention to bystanders that this was a haunted house. Other than that, the building appeared to be a former D.D. Discount building. I must say that the run-down look of the building did tie in with the run-down look of the d������cor that we found inside.

First thing to say about Valentine Haunt Sacramento is that there is no awkward silence; heavy music is cranking throughout the haunt. The scenery is very similar to their sister haunt, having a very modern look, but with ‘unkempt’ details. The walls have dust, grime, and blood splatter everywhere. Simply put, this haunt looks gross. You do not want to touch anything in here. Since we were automatically repulsed by the d������cor, we were more open to startles from the various actors. There are several realistic, bloodied and mutilated corpses scattered throughout the haunt and lighting was used very sparingly. By ‘sparingly,’ I mean the only source of light was a flashlight issued to each group of attendees by the ticket booth staff. Otherwise, the haunt is almost pitch black inside. The darkness worked very well in the actors’ favor as we traversed through because we couldn’t see where they were coming from.

This event was Ultimate Terror Scream Park’s Valentine’s Day-themed attraction; although, it was difficult to see how the Valentine’s Day theme played here. Having actors in traditional Dracula costumes was an odd mix with the modern d������cor. During October, Ultimate Terror has three haunts. For Valentine’s Day, they combined them into one large haunt, but it was still obvious to see the three themed zones: The Bath House (a homage to rundown restrooms, showers, and basement plumbing), The Tooth Fairy (a psychotic dentist’s office) and The Seven Deadly Sins (a private residence with a deadly sin theme in each room).