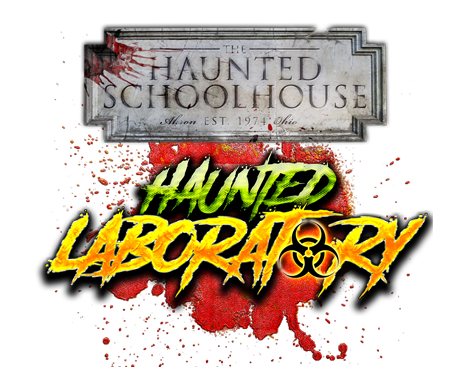 Under new ownership this year, the Akron Haunted Schoolhouse and Laboratory have undergone some changes this season but fans have nothing to fear when it comes to updates. The Schoolhouse and Lab have retained their classic, spine-tingling settings and structures while introducing high-tech special effects, a more unified theme, and a strong embrace of the horrifying history of the Akron Haunted Schoolhouse and Laboratory. Because tickets can be bought singularly or as a combo, we have separated the scores for each haunt in multiple categories. We highly recommend buying the combo pass (or even the season pass to get unlimited visits for the year to both houses and the Factory of Terror in Canton) so you can see all that these remarkable haunts have to offer. Also, wear comfortable shoes as this is a lot of haunt to traverse and there are a fair amount of stairs in both houses.

The Haunted Schoolhouse and the Laboratory are full of monsters waiting to devour you or delight you. There is a lot of interaction between actors and patrons as several of the beasties are more than happy to banter back and forth with anyone foolish enough to take them on. Every year we are impressed by the quick and rapier sharp wit of Bones. This year we had the addition of a lab assistant protecting his pets, a ghoul offering some rather claustrophobic real estate, and Alma the librarian who welcomes you into a nightmare literary anthology. Every actor stayed in character and emphasized the theme of the room they were in.

Costuming has seen a large improvement over previous seasons. Masks are used more sparingly and never untucked. Makeup is detailed and intricate and costumes are appropriate for both character and setting. Even the monsters watching the doors had painstakingly created visages. The quality of costuming extended to the actors handling queue entertainment as well and really set the tone for both haunts.

Just like last year, the customer service was very good at the Akron Haunted Schoolhouse and Laboratory. The ticket booth has been moved to a more accessible location in between the two haunts. A lively new midway has been created that holds merchandise and concessions along with port-a-potties and photo opportunities. The path between the two houses is much better marked and explained, and lines are kept entertained and moving. It’s important to stress that you should wear comfy shoes and expect to climb a lot of stairs.

The Akron Haunted Schoolhouse and Laboratory both have an imposing and historic fa������ade that lends itself perfectly to being a haunted house. The new midway adds a sort of festival theme to the center which is relaxing in comparison to what faces you in the haunt, but the sounds of Midnight Syndicate put us firmly in the mood for Halloween and haunted houses.

Both of these buildings have actual history as what they purport to be – a schoolhouse and a laboratory. Built in the 1920s/1930s, the historic (and sometimes crumbling) facades are a great bit of atmosphere that you just can’t find anywhere else.

Special Effects are varied and abundant throughout both haunts. In this category the Laboratory holds a special ranking as they are home to a one-of-a-kind electrifying prop as well as some surprises specific to the facility that cannot be found anywhere else. While the Laboratory is full of high-tech special effects, the Schoolhouse has more old-school tricks in place. Rooms lose their stability, foreign environments are lovingly recreated, and everywhere you look there’s something to see. With all the new additions this year we eagerly anticipate even more special effects treats as things are added and updated.

The Haunted Schoolhouse and the Laboratory have very different themes and presentations. The Schoolhouse’s theme is a bit subtler, as you are greeted energetically by Alma the librarian and inserted into the horror stories contained in her library. Most scenes have a strong correlation to literature and clear influences from classic horror. This gives a more intimidating and spooky castle feel to a lot of the Schoolhouse.

When it comes to the Laboratory, the updated theme is not only original and unique to the haunt, but is fully legitimized by its setting. On our metric they earned a ten for using the authentically scary history of both locations to create truly custom haunts.

Screams are in abundance throughout both haunts. Scares are more varied than ever before and a combination of actor skill, unique location, and creative special effects makes for a high terror level. There are a lot of heights involved, which put one of our members on high alert. The Akron Haunted Schoolhouse and Laboratory uses the natural strengths of its setting along with the ingenuity of their own creations to make a one of a kind, unmissable haunted location. The opening for the Laboratory sets a tone that is carried throughout the haunt and the finale of the Schoolhouse is full of the same cutting wit and intellectual fear that characterizes the rest of the haunt.

Of note – if you or your friends have a fear of heights, there will be parts of the Schoolhouse and especially the Lab that may be hard to stomach and navigate! Be prepared for lots of stairs.

It took our team about 38 minutes (not counting the time spent in the midway) to make it to the end of the Akron Haunted Schoolhouse and Laboratory not counting the amount of time we spent in the midway. Tickets can be purchased for a single house, for the combo, or for both the Akron Haunted Schoolhouse and Laboratory and the Factory of Terror in Canton, Ohio. With a long walk through and a variety of sights to see, this haunt is a great value for your money!

Randy – 9/10 – October 9, 2021Going through the School House and Laboratory takes about 2 hours of walk through time. I cant …show more express enough how much they seem to pay attention to detail. Some scenes are simply breathtaking. The actors are very energetic and true to character and the props are outstanding. The immediate or fast pass is worth every penny.

Most Realistic Costume - Ms. Alvah (Given by: Team Jefferson Starship)

Best Usage of Fog (Given by: Team Jefferson Starship)

Actor Shout Out - Ms. Alvah (Given by: Team Jefferson Starship)

Actor Shout Out - The Keymaster (Given by: Team Jefferson Starship)

Actor Shout Out - The Lightning Bringer (Given by: Team Jefferson Starship)