Ancient Relic at Village Escapes is a Escape Room located in , . 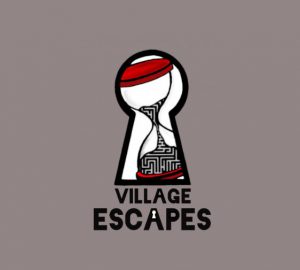 This attraction was reviewed on May 23, 2021 by Team Houdini.

Fortune and glory kid.’ Who knew it is located in the sleepy little town of East Palestine, Ohio; specifically at Village Escapes? Village Escapes is relatively new to the escape room game, opening in late 2019. With over a decade of haunt design and management at the Creepy Hollow Haunted Trail, Nathan (the owner) decided to take his passion in a new direction, escape rooms. Along with the help of Ashley (a co-owner) they created two unique adventures: Ancient Relic, a 60-minute room and Jurassic Problems, a 30-minute, kid-friendly room.

We were able to experience Ancient Relic, an Indiana Jones, Mayan temple, jungle-themed escape room. If you are old enough to remember Legends of the Hidden Temple you will notice several throwbacks to the show. So grab your whip and Fedora and cue the Indiana Jones theme because it’s time for an adventure.

Village Escapes was easy to find using GPS. It is located on a corner lot diagonal from Rite Aide and Dogs on the Run, which we were told has great food and ice cream. Parking was located along the street. There was also a small folding sign located outside of the building. Village Escapes is located in a historical building known as ‘The Book House’ that was built in the 1880s. The narrow lobby was quaint yet grand. There were no puzzles to pregame before the main attraction but we were not waiting long, as all the shows are private and spaced out to where there is no cross traffic with other guests. This was in play even prior to Covid.

There were several antiques scattered throughout the lobby mostly found in the building. Not only did they provide a historical vibe but also fitting in with an aging archaeology theme. No main safety issues were noticed outside of the playing area. Inside the room, it is dimly lit which is not uncommon for these types of attractions. Covid policies were followed for the moment as they have been changing daily. Private groups, masks, hand sanitizer, and additional cleaning were all in place. We felt comfortable with these precautions.

Nathan met us in the lobby. He was very energetic and hospitable. Not only was he passionate about his art but also the building and the community. He made sure he pointed out some local cuisine in the area, hoping to provide something new and bring some outsiders to his small town. Nathan provided the basic rules and info of the room and then directed us to turn on an old 1920’s style radio. The old radio provided us a back story and goal of the room, presented by a well-spoken young lady. Before the sun sets you must investigate a mysterious tent, locate the hidden temple, find the ancient relic, break the curse and save the village!

We immediately entered into a small white cloth tent. It was dimly lit by an old fashion lantern and some flashlights were lying around. ‘Snakes. Why’d it have to be snakes?’ Snakes laid around the tent blending with vines and leaves. Make sure to look up so you don’t miss a slithery illusion. Once we made our way out of the tent we discovered another area that placed us into the Mayan temple. Shadowy and intimidating it was filled with stone carvings, torches, vines, lizards, more snakes, and other surprises. It visually provided a fulfilling experience.

Sound effects were simple but effective. We heard many sounds that you would expect in a jungle. Birds, wind, and other natural sounds echoed around the area providing a natural experience.

The dimly lit areas helped provide a feeling of dusk while also hiding clues, puzzles and a few unexpected surprises. Torches with flickering flames provided additional light and a classic temple vibe. The lighting also plays into the puzzles and gameplay.

We found the story behind the room interesting and original as this is the first jungle/tomb raider room we have experienced. It wasn’t overly drawn out but provided enough information to be exciting and interesting. Props and d������cor, modeled after real Mayan artifacts, added to the authenticity of the theme.

Ancient Relic falls mainly under the Gen one category of puzzles. We found the puzzles to be challenging but not too difficult that beginners would feel intimidated. The puzzles were logical, requiring the gamer to pay attention to details and their surroundings. We enjoyed some new puzzles that we had not seen in our previous adventures and a few re-runs that were revamped to fit the theme.

The challenges were interactive requiring us to work together several times. Communication was very important as relaying information between areas was valuable. All of the puzzles fit the narrative of a jungle explorer.

Village Escapes provides unlimited clues for the Ancient Relic room. Nathan was also our game master and provided hints to help push us along when we were stuck. Hints were provided in a voice of the God’s manner. It was as if someone or something was communicating with us through the temple walls, literally, but it worked quite well.

The time tracking was quite interesting in this room and was a little different than usual. Inside is a sundial device with six glowing orbs. Every 10 minutes a light goes out. We found this quite unique and perfect for this room.

We had a great time at Village Escapes and we were able to save the village with a little time left to spare. We appreciated the throwbacks to Legends of the Hidden Temple and Indiana Jones. Ancient Relic throws guests into a modest but realistic jungle setting. The interesting mind-benders were not too difficult, don’t worry we got stuck a few times, making it a great room for beginners and families.

The overall design is something experienced players will enjoy experiencing. Throw in a few surprises that stem from the owner’s haunt past with a $20 ticket price (below average) and it’s worth the trip to this charming little town.