Containment’s unique fa������ade is easily spotted and the parking lot is free to use and spacious. The ticket booth, line, and port-a-johns are well lit and accessible, and the haunt itself is handicap friendly. Everyone we encountered was friendly and open, proud to talk about their haunt and eager to help with any questions we might have had. Staff was easy to identify by their uniform t-shirts and line entertainment was provided. Several guests seemed particularly delighted by Choo Choo, so much so their hands flew up in excitement and they shrieked with joy to see him. At least, it sounded like joy to us.

The fa������ade of Containment is slightly underwhelming compared to the impressive sets and scenes held within. Our team was actually very pleased with the shock that this induced. Music plays on loop to keep patrons entertained, and although not all of it was Halloween or haunt themed, it was all engaging. Staff here was high energy and the guests around us were all excited for what was coming up. 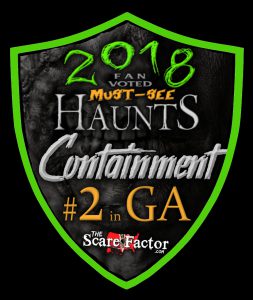 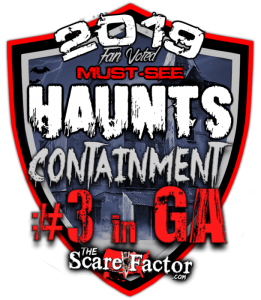