Disturbia is a great small haunt outside of Columbia, South Carolina. Built as a trail walk in a short amount of time, it’s clearly got some effort behind it. Though it’s not very long and has to deal with the same sorts of issues that nearly all walking trail haunts contain, it does a decent job of providing a short scary experience and would be a great starter haunt for folks who have never visited a haunted house before.

Disturbia is situated in the woods opposite the parking lot of a local bar venue and as a result can be a little difficult to spot immediately, but it’s worth the effort of seeking out and experiencing.

Disturbia is home to a little over two dozen creepy creatures, movie villains, and screaming victims. A few of the cast were good at appropriately creepy dialogue, but there were also some lurking villains and more than a few bloodied victims who did little more than scream in terror. The actors were typically bunched together in small knots of nerve-wracking dread, but all of the scenes were manned by at least one person.

Some of the haunters were young or inexperienced and could perhaps use a little more coaching to hit the level of detail that frequent haunt-goers find impressive, but overall the cast did a great job of presenting a sense of impending fright.

Careful thought was obviously used for mask-usage versus makeup. No one was out of place in terms of their scene – whether it was a diminutive clown or a coven of bloody succubus-like witches or a looming and silent Jason. When makeup is used on actors with sudden jump scares, it tends to be less detailed when compared to actors that are in your face in stronger lighting for longer.

The haunt as mentioned above shares a parking lot with a local bar – Skeeter’s. Thus, the signage at the street is actually a sign for the bar with the haunt mentioned on the marquee. The staff running (and haunting) the attraction are knowledgeable, friendly, and helpful.

This is an outdoor walking trail, however, and the staff are quick to point out that there’s always the possibility of trip hazards. They do suggest (even encourage) visitors to use their phones as a flashlight if they feel the need (especially in the very dark sections of the trail) with the caveat to not shine the light in the monster’s faces. This is ultimately a good thing because the trail here is rough in some patches and while the haunt has done a pretty good job of providing some lighting to direct you where to go next along the path, there are parts that are very dark. While this does add to the overall atmosphere, it could be a challenge for some.

There is a huge wooden wall and iron gate keeping the monsters from wandering into the parking lot and marking a clear spot between the waiting line and the interior of the haunt. The bar across the parking lot is something of a distraction with its loud (and live on the night we visited) music. However, once you have started into the trails inside the haunt, the trees do an adequate job of muffling and muting the music to a degree, though by the final scene you can hear the music once again.

As mentioned, the music from the bar bleeds into the haunt in a couple of places which can be a tiny bit of a distraction. The haunt itself is fairly low tech – most of the effects are provided by the skill of the actors and the dark of the woods. There were some creative lighting effects used along the trail – where they’re able to get some lighting in, it’s done very well.
Some of the scenes along the trail aren’t very detailed – one of the risks of a walking trail is that it’s hard to get effects down to where you are or to integrate them into the surrounding environment. However, Distrubia’s creepy clown tent and the final coven of witches do a great job of being distinct areas where the details and surroundings work together.

N/A
Disturbia didn’t have a single unifying theme but instead runs a gamut from Jason’s Camp Crystal Lake to a (nearly) deserted clown tent and a woodland gathering of bloody witches.

Disturbia doesn’t want to just jump out and go ‘boo.’ Instead they’ve done their best to build a variety of different scenes and use the actual walking of the trail to build in some suspense. A good horror film or story works to slowly build some tension, sprinkled with a few sudden shocks, before delivering the horror at the end. Likewise, Disturbia has tried to achieve a similar style of experience. Scenes towards the start of the haunt tend to be fairly low-key building a sense of unease. You know something is going to pop out at any moment, but you don’t know what or from where. As you move through the haunt, the scares start to come more often and more direct. There’s obviously a lot of thought put into the haunt; we’d be interested in seeing what this team could do with a permanent location and a bigger budget.

The biggest drawback to Disturbia is that it’s so brief. We got through the trail in about 12 minutes; some folks might be able to stretch that out by walking slower, but likely not by too much. However, ticket prices are comparatively low at $15.00 for general admission and the haunt offers different deals and specials to potentially reduce those prices more.

Given the limitations of being an outdoor trail and the surroundings they’re working with, Disturbia does a good job of utilizing all of their available space. Hopefully this haunt will grow in coming years and continue to deliver. 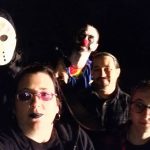 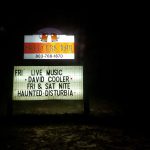