Escape Purgatory at Steel Valley Nightmare and Escape is a Escape Room located in , .

WARNING! The following review is for mature audiences and may be disturbing to some readers. Reader discretion is advised.

We had recently heard about an escape room located in Girard, OH from a few escape room owners we’d met from reviewing their rooms. They would not tell us much about this room other than it was extreme, it was adult, and it is a unique experience. It piqued our interest, so we reached out to Steel Valley Nightmare and Escape in Girard, OH to see what this attraction was all about.

Steel Valley Nightmare is a unique experience in many ways from the typical rooms we have experienced. They only offer one attraction; however, they change the puzzles and themes quite frequently. They have kept an interlocking storyline through each new iteration.

Even if you haven’t played any of their prior rooms, you won’t be lost. But, for those hardcore returning fans, they will get an intertwining plot.

Steel Valley Nightmare considers itself more of a horror attraction than an escape room. It is what some would consider an extreme attraction. Live actors, nudity, vulgarity, physical interaction and more can and may happen. SVN can also adapt to its patrons – making no two shows alike. They can up the hardcore X rating for adult contenders or if kids are present they can provide drop it down to an appropriate rating. Finally, out of the 21 rooms we have reviewed and over 30 we have attended they are only the second to have live actors in their rooms.

We feel Steel Valley Nightmare is best experienced with the least amount of information possible. The fear of the unknown adds to the excitement of the show. So be warned – spoilers ahead!

Inside, there was a small waiting area. The lobby was claustrophobic with odd pictures and funny signs hanging around. The walls had a wood appearance and the ceiling tile was colored to look moldy. There were no chairs – just standing room only. There also were no pre-game puzzles, which was fine as we were immediately greeted by Ashley, the owner’s wife. She provided us with waivers to sign.

Then Dick popped out. Dick is the owner and the twisted mind behind SVN and the life of the show. Dick has a background in the haunt industry creating animatronics for haunts. A likable guy, ardent about his skills and intimidating; perhaps it was because he mentioned cramming a penis down our throats two minutes into the conversation. We all laughed and then looked around and wondered what the Hell did we get ourselves into!? He then explained the rules and safety concerns of the facility. Finally, we were ready to explore Purgatory.

As mentioned, the previous incarnations all tie together. The first theme was to escape a serial killer’s lair, the second was to escape from his brother’s “psycho surgery,” and the last was to escape the aforementioned brother’s sister’s possession – got all that? Now they are all deceased and we are trapped in their “Purgatory” where we don’t deserve heaven and Hell is too good for us. Three completely different realms are designed to destroy the mind, body, and spirit.

As mentioned any detail could greatly spoil the enjoyment, therefore my descriptions here will be more vague than usual, but there are* some spoilers ahead.

Each area does provide a unique feel, as if you are in a dream that switches location instantly causing confusion and readjustment to your surroundings. After we completed our trip we found out that everything in the rooms was real. If it’s legal to have the real version of it then it is real; including weapons, dead animals, teeth, and more. Each realm provided a realistic and authentic look and feel to match that theme.

Sound effects were used sparingly in the first two areas. In the first area, it was dead quiet; the only noise was our bewildered voices and maybe someone else’s. This may have been an intentional way to provide a greater feeling of isolation from the outside. In the second area, the only sounds provided were from the animatronics, which were purposefully repetitive and distracting. We feel that additional sounds could be beneficial to add to the realism and immersion. However, it did not take away from the severity of the rooms. The third realm had some background music that fit the setting as well as another character that we will discuss later.

Lighting was used well throughout each section providing a realistic atmosphere, especially in the third room.
The story was very original and we found it intriguing how it coincided with the previous rooms. We only wish we would have had a chance to experience them. It was a fresh take on the horror escape room genre. Most “horror” -themed rooms focus on a serial killer or haunted house, whereas this theme adds a new spin to the genre.
The theme was interesting and executed convincingly.

Since no one knows for certain what Purgatory is, it gives the creator lots of liberty with the design. The knowledge of the previous storylines makes the theme more consistent, but without it, things may have seemed a little confusing.

All in all, it felt like we had entered a sadistic world of torment – not only frightening, but frustrating… what we’d imagine Purgatory might be: not peaceful, not completely evil, but a constant uneasiness of what’s next and what to do. We noticed no real distractions from the immersion outside of the normal.

Steel Valley Nightmare was a humbling experience. As Dick told us, it is difficult. We quickly noticed that our conventional ways of thinking and prior experience reviewing rooms did not help all that much here. It was a new process of thinking for us and we struggled.

The puzzles were still logical but not what we were used to. We would say there were fewer puzzles here than most escape rooms, but they are each more challenging. Not to mention how the interactions with the actors affect the flow of the gameplay. Locks and puzzles mainly consisted of Gen-1 and Gen-2 styles and were all designed by Dick.

Before entering, we were provided with a rosary that provided us three hints. To ask for a hint, we all had to agree to ask, raise our hands, and scream DDDDDIIIIIIIIIIIIICCCCCCCCCCCCKKKKKKKKKKKKKKKK!!!!!!!!!!! We need help! Either Ashly or Dick would assist. We used these up pretty quickly and, by the time we reached the final realm, we were “f#&ked” as Dick told us.

Ashley did a great job providing us answers via an intercom system (“voice of God” style), or by physically entering the room. We did feel this took out some of the realism; however, I think this may have been our fault as we were so far off from figuring out the puzzle she couldn’t simply explain it over the intercom. We were way off in left field.

I would imagine that, in the final room, answers would be provided by the character as he was very interactive with us. He provided hilarious commentary and some hints. His creepy serpent-like voice was exceptional, his comments were quick-witted and hysterical. His performance rivals some of the best haunt actors we have seen.

In the beginning realm, there is a timer that tracks your time. But, as we moved into the deeper realms, your knowledge of time is harder to track, with occasional time checks dropped in via the intercom system. At one point, the final character informed us we had exactly “f&*ked” minutes left, and he was correct.

Although difficult, we enjoyed the mix of puzzles and interactions offered. My only suggestion would be to tweak the way hints are provided to fit the theme a little more accurately.

Steel Valley Nightmare was an immensely entertaining time. Even though we failed to escape, we had an incredible experience. It is definitely a must-experience for escape room fans, horror fans, and people that aren’t quite right.

On Friday the 13th, they offer a special show for their fans. You must call in person to reserve a position and it is a more-extreme version of the escape room with a “Fear Factor”-ish spin. (You remember that old show with Joe Rogan?) After I heard the details I knew I was out, but I will defiantly return to see the next incarnation.

At $25 a ticket, it is slightly below the average cost of an escape room. However, this is far from your average escape room. Steel Valley Nightmare is an extreme escape room with a unique story, R-X rated adult situations, theatrical sets, and live actor interactions, providing an exciting, terrifying, and hilarious adventure that you have to see! 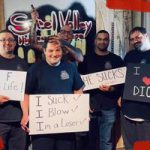