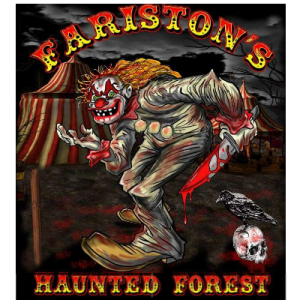 Fariston’s Haunted forest is in their 17th season of scaring innocent souls this year! Hop aboard the wagon and hold on tight as you get carried away into the depths of these terrifying timbers, but your journey has only just begun…. Making your way back to safety will require a walk through the same wicked woods that you passed on the way in! This family-friendly, outdoor trail features frights from a few familiar foes and a few other faces and facades that you won’t find at most other attractions. We definitely had a fun time during our visit, so if you happen to find yourself in the rolling hills of Southeastern Kentucky in the ballpark of I-75, be sure to stop in and see the folks at Fariston’s Haunted Forest!

We were informed that around 40 cast members wander the woods of Fariston’s on a typical night. We didn’t see quite that many during our visit but, granted, we did visit them on their opening weekend. On top of that, several of Fariston’s crew are new to this haunt so, as a result, a few parts of the trail were a bit “dead” and several of the actors seemed to still be a little “green.” Despite that, we still saw a few good performances; Freddy caught us off guard on multiple occasions before our trip even started, The Creeper tried to snatch us up as we passed through his barn, Leatherface chased down some of our group members and Santa, his straight-jacketed victim and his elf each had energetic acts with appropriate dialogue (ok, so we knew we were on “the naughty list” already, but we’ve never been told, “You might have survived Santa, but you won’t survive ME,” by an elf before). Two other actors who caught us off-guard were debatably the most believable to our group: the one-eyed ghoul who irately ran up to our group, repeatedly whacking a stick on the ground as hard as he could and another one, the “Forest Crawler,” who firstly told us to “run” and, when we questioned “why,” he got down on all fours and started chasing us!

The costuming at Fariston’s ranged quite a bit in quality and detail. While a good chunk of the characters were adorned with more common outfits (like overalls, ripped up clothes, black cloaks, etc.), we could tell that others had a little more time put into them, such as those worn by Freddy, The Creeper, the clown, Santa and his elf. Makeup ranged as well, from what appeared to be non-existent to greyed-out, grungy, detailed skin effects. The black and white makeup on the nuns (seemingly from “The Conjuring 2”) and the red and green design being sported by Santa’s elf looked a bit simple at first, but also seemed “fit” and were appropriate for their respective costumes. A few masks are used here at Fariston’s and some of them are high-quality models that we’ve seen on display at industry trade shows (in other words, they’re really nice ones)! We must say that the scarecrow who greeted us at the beginning of the haunt had one of the most unique costumes we’ve seen so far this season!

We noticed signs for Fariston’s at the last two intersections before arriving at the haunt. If you’ve never been here before, be sure to drive slowly on Shackle Road; it’s a one-lane, two-way road with a few hills, so just be ready to pull off to the side if you meet another car. Once you get to the entrance, several parking attendants with flashlights will guide you to your parking spot on their free, grassy lot. We noticed a few other guests that were confusing the haunt’s souvenir stand for their ticket booth. To clarify, their ticket booth is located next to the rope lights (nearest the road) and the gift shop is placed at the exit of the trail. You can always tell when the folks at a haunt are doing what they do out of love and a picture of Faristons’ staff is next to the definition of “friendliness” in the dictionary (go ahead, look it up). Each of their staff members wore some form of makeup and one was even in full costume (with a pretty malicious-looking mallet, we might add)! Although not present on the night of our visit, we were told that the concessions tent will be in place again close to the queue line in the near future. Freddy successfully kept us on our toes during our brief wait in line and rope lights and tiki torches helped keep several parts of the trail adequately lit. There are a few rough spots out there, so be sure to wear appropriate footwear… especially if the ground is wet.

The small town of London is albeit a quaint cover for the quarrels that await you in Fariston’s Haunted Forest. The one-lane road that leads to the entrance gives you just a taste of the insecurities that you’ll face once you arrive! Fariston’s is located next to some farmland, so the old tractor, the decorated ticket and gift shacks and the overhead rope lighting that leads to the queue area served as refreshing, Halloweeny throwbacks that “took us back” to the good ol’ days of care-free trick-or-treating. The tiki torches near the start of the trail were a nice, added touch as well. While it’s not the scariest stuff in the world, it’s certainly appropriate for this family-friendly attraction.

The sounds of the truck (or tractor), the trailer we rode on and the tree branches that scraped along the top of it could probably be considered as an “effect” all on their own, as the journey to the starting point can be kinda spooky in itself. That’s not even mentioning the petro-powered surprises that “may” be waiting for you along the way! The weather didn’t allow Fariston’s to get their corn field back this year, but a brand-new barn with the sounds of a “creepy” film was in its place, instead. Other movie soundtracks could be heard throughout our tour, but most of them were actually few and far between, which left several quiet areas where nothing but crickets could be heard (aside from the occasional chainsaw, screams, you know… the usual nature stuff). We must mention that we did see a few certain items sitting out in the open during our visit that are typically hidden from view at most haunts(including someone’s cell phone), which somewhat hindered the realism in those areas, but most of the scenes were given good detail work, otherwise. Some of the other types of effects we came across include a couple of “stretchy” surprises, a vortex tunnel, a brick on a stick, strobe lights, a graveyard, medical vehicles and equipment, a funhouse, sliding floors, loud bangs, accent lights, a fierce flame and a few scenes from a slightly “chillier” holiday.

Fariston’s doesn’t stick to any one theme throughout their attraction. Instead, they prefer to cover a variety of frights and phobias, from movie monsters to other good-gone-bad characters of their own.

If you’re one of those folks that loves haunted houses, but you’re just not up for something that’s “too scary” or “extreme,” then Fariston’s Haunted Forest is probably right up your alley. There’s not much blood and gore either so, if you think the younger members of your family can handle it, you can bring the whole crew with you (for reference, Fariston’s recommends no one under the age of 7, but they’ve seen some younger ones go through that were just fine and some older ones that were petrified when they came out)! Some of the frights included the use of real fire, multiple monsters coming at us from different directions, frantic and demanding encounters, chainsaw attacks, dizzying and disorienting rooms and overhead surprises just to name a few. Some of the monsters were hidden in less-obvious areas, so don’t let your guard down at any time!

As mentioned before, some of the actors were still a little rusty for haunt season and it should be mentioned that a couple of strangers in our group got separated part of the way into our tour, so some of the actors’ timing was a little off and a few of them didn’t “reset” in time. Some of our scares suffered as a result, but we’re sure this doesn’t happen for everyone and the actors’ ability to adapt will improve as the season progresses.

A ticket to tour Fariston’s Haunted Forest will cost you a mere $10 (same as last year). Our review group spent a total of 15 minutes trying to escape the woods, which gives this haunt a score of 1.5 minutes per dollar. This is considered an “average” rating, based on the scores from all of the haunts we visited in 2015. If you’re in the area and looking for some scares in a creepy environment with some familiar horror movie villain faces, then we’d highly recommend giving Fariston’s a visit! “This haunt has been family owned and operated for 17 years, come and see what all the talk is about!” 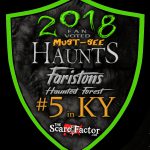 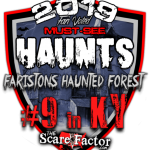 Shanita Boswell – 10/10 – October 26, 2018My family and I have been going to Faristons since 2016. We have made it our Halloween tradition. I …show more absolutely love the dark atmosphere and the creepy hayride at the beginning of the trail. I’m a huge horror movie freak and seeing the characters from my favorite movies come to life is truly an amazing experience. I love that the characters will take pictures with you and make sure that you’re walking away with a little bit of pee in your pants. I especially love how the cast will stand to the side if they see a family with a small child walking towards them. The cast and crew definitely have fun turning a little trail in London KY into a fright night. They keep it professional and very seldom break character. Even though I won’t be able to go through the trail this year due to being pregnant, I still plan to keep the tradition going and watching everyone else get scared

Actor Shout Out Award - Forest Crawler (Given by: Team Zombillies)

Actor Shout Out Award - Leatherface (Given by: Team Zombillies)

Actor Shout Out Award - One-eyed Ghoul (Given by: Team Zombillies)