Fear Factory is a Haunted Attraction located in Batesville, IN.

The Fear Factory takes place in an authentic, early-1900’s, 4-story building that previously served as the original Batesville Casket Company factory and, later, the RomWeber Furniture manufacturing facility. Caked sawdust still lines the walls and blood splatters on the floor serve as evidence that some malicious manufacturing processes are taking place behind the building’s brick walls these days…

2017 is the Fear Factory’s 7th year in operation and our first visit to this charitable haunted attraction. The haunt was started as a fundraiser for Cierra’s Club, a foundation that provides safe entertainment choices for teens that do not include drugs or alcohol. The group was started after the untimely death of Cierra Adams, a local resident who suffered a fatal heroin overdose on her 18th birthday. It’s obvious that the cast and crew are very passionate about their cause – providing other locals with a fun and frightening Halloween event!

Around 50 or so actors were present during our visit, but they have about 200 total volunteer actors that alternate on various nights, so you can likely go from night to night and see different characters here. This number kept the scares coming fairly consistently and several of them were able to scare us multiple times. A few had clever hiding spots and used well-timed distractions to accomplish their creepy antics.

Many of the cast members were younger and full of energy, but their dialogue consisted of a lot of screaming and generic phrases. “Get out” “help me” and “where are you going” were heard quite a few times. Some of them were also completely silent – such as some of the zombies – when some extra gurgles/growls etc. may have made them a bit more believable.

Some of the most memorable characters included an actor in dark clothes that swiftly crawled across the floor at us, a bibbed and masked fiend who stalked us for quite some time, the nurse who insisted on pulling our teeth out and a lady who split our group up and stayed with the last member to ensure we stayed that way!

There are typically 5 makeup artists that work together in applying the finishing touches to the creatures within the Factory. The makeup was one of the standout aspects at this attraction and one of the areas where they seemed to excel the most. Airbrushing techniques, realistic wounds and even some scaly-looking skin showcased the makeup team’s talent. Various masks were noticed as well, including some that were more unique than others. Hard hats and factory worker uniforms were appropriately utilized, as well as medical scrubs and vintage dresses that took us back to the time eras when the Factory was in its prime.

Several of the costumes really stood out to us as being the most complete during our visit. The first one was worn by Jason Voorhees. Not only did he look like he’d just crawled out of the bottom of a lake, but he also SMELLED like it! The fuzzy, giant rabbit that followed us around had a complete costume with a few dashes of fluorescent color, which helped him match his surroundings while adding a unique touch to his overall look. If all of the characters in the factory would have been as detailed and thorough as the aforementioned, this haunt’s costuming department would’ve been quite impressive!

The old factory building is nestled amidst the industrial area of the city, but this one is very hard to miss due to its tall smokestack and giant eyeball peeking at you through one of the front, upper level windows. The banners hanging on the building and lighted, “dancing” inflatables near the entrance led us to the correct location to park. At first, we weren’t really sure where to go, but a ghoul with blood dripping down his face pointed us to the entry door around the side of the building.

Several friendly staff members are stationed at the ticket table, the entrance to the haunt and the 2 mini escape rooms. Each of them were eager to strike up a conversation and talk about their haunt with us. A couple of spooky queue entertainers were mingling with those in line and making sure no one got too comfortable before making their way into the attraction. A large concession stand was available and several vendor booths are in place at the haunt’s exit so you can grab some ghostly souvenirs before you leave.

The haunt does take place on the second level of the building, so guests will need to be able to go up and down a flight of stairs. This is also an old building, so a small amount of uneven flooring was encountered. Other than that, most of the haunt involves walking normally with no crouching, climbing or crawling involved.

The Factory itself and its towering stack are a sight to see, especially for haunt seekers that appreciate a spooky-looking building! Check out some of the pictures (below this review) of the exterior just so you get the idea of how creepy and authentic it is! The giant eyeball and roaming ghoul outside the building let us know that the Factory had been turned into a haunted attraction. Every now and then, a loud scream or thump could be heard coming from the second story, which had us wondering what was going on up there!

Once inside, it was fairly evident that the main floor is used as an event hall during the off-season. Although there were a few roaming factory workers, other queue roamers and some Halloween decor at the entrance, we definitely felt like we were in more of a spooky, well-lit, party / gathering area rather than a terrifying haunted attraction.

The Fear Factory showcases many old-school effects, including some that we haven’t seen before. The moving props were unique and more violent than what we are used to so a few of them caught us off-guard. The majority of the haunt is lined with loosely-hanging black plastic that has been spray painted with fluorescent colors. On occasion, though, we did find some black wooden walls and some startling effects made good use of these more permanent foundations. Decorations ranged from old office supplies and vintage photographs, electrical breakers and gravestones to gory saw blades, hanging bodies and even a flying bat! A good chunk of the props have also been accented with fluorescent colors and about 3/4 of the walls have some form of anti-drug- or alcohol-related message spray painted onto them. UV lighting helps make these vibrant colors more noticeable.

Music was heard in areas and, at times, the placement of speakers would allow the sound to produce a surprise all on its own (you’ll see what we mean if you go). Most of the scenes didn’t have their own music, instead sharing a single sound track with a zombie apocalypse, dubstep-type mix being heard the most. Other areas were relatively quiet in comparison.

There were so many different effects to experience in this large haunt, so we’ll just give you an idea of what you can expect. As we made our way through the Factory, we came across a lot of mannequins, realistic medical equipment and decor, many coffins, random things hanging in our path, a giant spider and it’s nest, electrical poppers, a swing, a beheaded doll, unique blacklight-reactive tombstones and much more!

Although we weren’t told of an enveloping storyline that takes place here, we were informed that they are trying to stick with the overall theme of a “factory” as much as they can while incorporating the harshness of drugs. Shortly upon entering, we came across an elegant display of coffins as we were welcomed to the casket factory. Furthermore, we journeyed through areas we would expect to see in such a facility, but also others that didn’t make as much sense to us. Some of the areas included a medical malpractice zone, a clown area, a butcher shop and diner, as well as a very large cemetery. Although we didn’t hear any characters making direct remarks to us about drugs, a lot of references were made on the walls throughout the attraction.

As mentioned above, a good portion of the Factory’s cast is pretty young and there aren’t many elaborate or high-intensity special effects. With that said most of the scares here are relatively mild in comparison to most of the other haunted houses that we visit, making the Fear Factory an excellent choice for youngsters or other locals that are just starting out with visiting haunted attractions. However, we did receive quite a variety of scare tactics that’ll keep you guessing as you make your way through…

These guys definitely knew how to use the walls to their advantage! Many unpredictable hiding spots were disguised within the black plastic walls, making it where we couldn’t tell if we were simply passing a seam or getting ready to get scared silly! Strategically-placed holes were cut into them at various points as well, which allowed them to execute several well-timed distractions. “Stalkers” followed us around on many occasions, our group was split up twice, possessed pictures were petrifying passing patrons and several “pop scares” were used to keep us on edge. The finale left us in an area where we could get our picture taken before going back downstairs.

General admission tickets to venture through this 30,000 square foot haunt will cost you $10.00 per soul. This is one of the cheapest ticket prices we have seen all season, especially for a haunt of this size! It took us about 22 minutes to escape the dead, putting their MPD (minutes of entertainment per dollar spent) at 2.2, which is well above the average of 1.5 that we see most often!

The Factory also houses two 3-minute escape rooms that are priced at $5.00 each. Groups of no more than 5 can attempt to escape each room. They also offer a lights on, no-scare tour. Additional information for both can be found on their website.

For those in and near the Batesville area, be sure to stop in and pay them a visit! The proceeds go to a good cause and there is a lot of fun to be had here for the low ticket price! 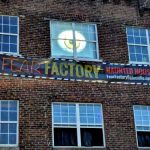 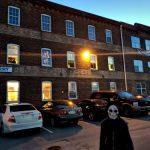 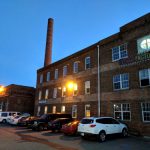 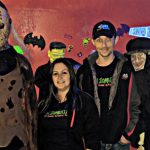 Guest ReviewsGuest Average: 4 out of 10

Steve Stenger – 4/10 – November 21, 2015This haunt supports a good cause and is non profit, its good place to take your kids. Lines are …show more short and it is not too expensive. Most of the actors are kids and some the scenes are a little weird and don’t seem to fit the overall theme. The walls are plastic and hallways wide and well lit so you can usually see the monsters coming. For adults this is a very tame haunt and you will most likely laugh more than scream. It’s a fun time for the family but for serious haunt goers its definitely not going to end up on the must see list.

Most Atrocious Scent - Jason (Given by: Team Zombillies)