Fear the Legend is a Haunted Attraction located in Lexington, KY.

Fear the Legend is a brand new attraction to the Lexington area that takes place at Whitaker Bank Ballpark and consists of two separate haunted houses. Brought to you from the masterminds behind Wicked World Scaregrounds, “Nightmare Hotel” and “Monster League” are two haunts that are off to a great start for their first year. Both of them offer a variety of frights with their own unique storylines to help give you the most immersive experience they can provide.

We almost didn’t believe it when we were told the majority of these cast members were first-time haunters! Between the two attractions, there are around 30 to 35 actors on a given night. This number seemed to fill the scenes rather well with at least one actor in just about every area we went through.

These characters knew their roles well and many of them yelled and bantered at us believably. A lot of irate and demanding dialogue was used too. At one point, a disgruntled man in a restroom was gagging as he was trying to clean a toilet and then he got angry with us for walking in when “[he wasn’t] finished yet!” Another time a brute threatened to “suck our brains out through our ears and feed us to the rats!” The Death character was insistent on capturing at least one of our souls before we departed through the graveyard, where we weren’t sure if the inhabitants within were any less relentless than the life-reaping character we’d just escaped. Beware of the pumpkins! Don’t touch them as they are brethren to the pumpkin-faced madman. There was one character that truly rocked it when we came through and had our skin crawling. This was the indescribable creature dressed in all black that made only hair-raising sounds at us while displaying its incredibly long black fingers! We also can’t forget about the female chainsaw assailant. She never put her saw down until we were out of her site! Watch out for that one… she’s got a bit of energy to release!

The masterminds behind this haunt’s creation have always been known to have some ingenious, custom costumes and many of them here were no different! The costumes were often just as believable as the characters wearing them and we didn’t notice any that were blatantly unfinished. The makeup appeared to have been applied with experience and helped in really adding the final touches to some of the characters. This was especially the case in the cemetery and on Abigail, who also had colored contacts and a noose around her neck (learn why in “Theme” below).

The masks were of great quality and also added dimensional features to characters that makeup alone just can’t provide. Clothing was tattered and distressed just as if these characters had literally crawled out of the walls of the old hotel. We could also hear what they were saying through them instead of just getting muffled talking. The costumes that stood out to us the most (aside from those mentioned above) were those worn by Death, who had boney hands, a pumpkin-faced fiend, the creature wearing all black and the sadistic nun. Perhaps the most complete and unique costume of the night, though, was the one worn by The Legend, who was roaming the ballpark grounds. His silicone mask mixed with colored contacts, gloves, platform boots, distressed ball jersey and tattered clothes really made us feel as if this character had just risen from some sort of ballpark Hell!

Finding the ballpark was rather simple and finding where to park was also easy thanks to the colorful, inflatable Halloween decor and multiple signs that showed us where to go. Parking was well-let, free of charge and in a nice, paved lot. The ticket booth is at the ball field’s normal ticketing windows, but it’s location wasn’t very noticeable to us first-timers at the park. Regardless, the roaming queue actor guided us there and a friendly attendant helped get us squared away. Finding the first haunt’s entrance could be a bit tricky if staff aren’t available to point you in the correct direction. There are a few spaced-out signs that should keep you moving in the right direction, but in case you don’t see them, just make your way around the left side of the complex and you’ll arrive once you get to the far end of the bleachers. Luckily, the manager was available to walk us to the entrance during our interview, so we didn’t have any chance of not knowing where to go.

There weren’t any lines during our visit but there was a queue line entertainer who greeted us at each haunt entrance. The “Legend” character had some baseball jokes to swing at us, so be sure to stick around for those!

Navigating the inside of both haunts was very smooth with wide passages and we didn’t notice any safety hazards.

The haunts do take place at a baseball field and they are only given a limited amount of time to build the haunts, so there isn’t a lot of exterior detail to see before you enter. But, each haunt did have a decorated facade as their entrances and the Hotel even had a silhouette of a person hanging in the front window! There were several Halloween inflatables near the parking lot entrance and The Legend (queue entertainer) met us shortly after getting out of our cars. His detailed costume and realistic silicone mask let us know this was no ordinary ballpark. Spooky music was heard playing outside in areas and helped in reinforcing the fact we were about to embark on a haunting adventure.

Despite the small amount of time these guys were given to set up the haunt, we could tell that some intricate detail and thought was put into some of the scenes. A variety of effects were noticed, ranging from things that appeared to be purchased from local Halloween stores to items that were created in-house and even some larger, high-end animatronics. As we rounded each corner we just never really knew what we were going to face next!

The scenes were closed in with walls and nothing above them, so some of the natural features of the ballpark were still pretty noticeable. Some mystifying and realistic sounds accompanied the scenes including wolf howls, voices and creepy laughing. There were also some real noises such as the chainsaws and an air tool.

Other effects we came across include many pumpkins, strobes, vintage lighting, grungy walls with blood dripping down them, spider webs, a large cemetery, scarecrows, a large boiler with realistic flames, dense fog and more.

Both attractions at Legends have their own storyline that they follow. These stories can be found on their website and are quite intriguing. However, the actual stories weren’t told to us or made very apparent while we ventured through. If you are one that really likes to get down deep and know what’s going on, you may want to read up on them before going. But, in short…

Monster League is a take on a haunted attraction that this review team has never seen before. Since it takes place at a real ballpark, the creators wanted to embrace baseball as much as possible in the haunt. Upon initially entering, several of the characters made references to baseball, but beyond that, we experienced a variety of different nightmares. Long story short, a boy named Tommy who grew up on a farm had a best friend who was a scarecrow on the farm. “Old Jack Ravenseed” was his name. Tommy loved to read horror stories and he would often tell the scarecrow of the newest and scariest stories he could find. One night, a group of bullies from Tommy’s school followed him out to the scarecrow, making fun of him. Tommy yelled back at them that he wished all the monsters he spoke of were real so they would kill the bullies. One of the bullies didn’t like that, so he shoved Tommy as hard as he could, causing him to fall and hit his head on a rock beneath the scarecrow. It appeared they had killed Tommy and, as the bullies began to panic, Old Jack Ravenseed rose to life. He told the bullies, “I’ve decided to grant Tommy’s final wish.” Remember what that was? The bullies had to face Tommy’s favorite monsters that night and it is said that, if you go near the field, you can still hear the bullies’ screams and see Tommy’s monsters. Old Jack Ravenseed remains close by, watching everyone that nears. Will you run into him yourself? Our personal thoughts are that we would love to see more references made to this story inside the haunt to make it more obvious and immersive.

Do you believe in Karma? The Nightmare Hotel is a perfect example of it. Abigail Vanderghoul is a widow who was given sole ownership of her husband’s beloved hotel after his passing. Many businessmen tried to acquire her hotel, but one in particular (William) was really set on it. He was so set on gaining ownership of her hotel that he made up lies and stories about it, claiming that people were dying there and that Abigail was the root cause of it all. The town began to turn on Abigail, dubbing her establishment as “The Nightmare Hotel” and, after she couldn’t pay her staff anymore and she realized what the hotel had become, she hung herself in the lobby of the hotel. Of course, the not-so-fine gentleman behind the rumors purchased the hotel shortly thereafter. He renovated the place, but something wasn’t right. People truly started dying. Less than 6 months after William took over the hotel, he was also found hanging from the lobby. In his hand, a note was found that stated, “This is her hotel!” Are you brave enough to enter this nightmare hotel? Before entering you will see Abigail and a silhouette of someone still hanging in the lobby!

Along our journey below the bleachers, we came across some very intimidating actors and a lot of threatening dialogue. Some of them were resilient in our efforts to evade them and others just wouldn’t take “no” for an answer (which was a good thing). We also came across some clever distraction techniques that sent us backwards more than once. A loud horn, a drop panel and multiple, effective hiding spots were also used. At the exit of each attraction we were chased with chainsaws and one of them was being wielded by a feisty female so watch your heads!

Admission to both haunts is priced at $20.00 per guest. It took our group about 14 minutes to navigate them combined, bringing their MPD (minutes received per dollar spent) to 0.70 which is quite a bit below the average of 1.5 that we’ve seen. Individually, we were inside Monster League for about 6-1/2 minutes and we were checked into Nightmare Hotel for another 7-1/2.

Even though this attraction was very limited on time this season, we believe there is a lot of potential here to create two really awesome attractions. They already have some creative ideas in store, as well as some impressive actors so we can’t wait to see what they come up with in the future. If you decide to visit, be sure to keep in mind that there are “two attractions, one stadium and nowhere to run!” 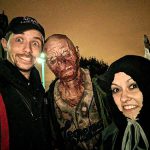