The cast at Folklore really shine. You won’t actually see very many of them, but they are a solid cast of characters ‘ each recognizable, distinct, and always on point and in character. There are actors who work the lines outside as well as actors inside. Jiggler the Clown, Lady Death, and the demon girl outside were fun to interact with. Inside Tremulous, the archaeologist whom you initially meet was very convincing and helped to set the mood for the attraction. The poor victim on the bed in the Manor was also very good.

There were plenty of spooky sounds and haunting strains of music wafting through the outside waiting area which is where the queue actors greet and stalk visitors. Plan to spend some time hanging out here so that you can meet all of them at least once before you head to the indoor waiting lines.
The outside of the building seems fairly plain. It clearly resembles an abandoned building of some sort ‘ a school? a dormitory? a hospital? ‘ but it doesn’t truly scream Haunt. However, the indoor queue lines are decorated to off-set that, giving visitors time to get in the mood before entering each of the haunts.

The special effects across both of the haunts we visited were typically used well. Many of them seemed to be standard props, but there were some that were clearly reworked and repurposed to specifically fit in with their respective settings. There are lots of little details that serve to immerse visitors into the setting provided by each of the haunts. In the Manor, these can be seen throughout ‘ from walls to floors to props and scenery. Inside Tremulous, be sure to keep an eye out for a gigantic god of Death, a hideous serpent, and then the final staring horde that you must brave to escape.

We also love that, for both haunts, they only send through very small groups ‘ it seemed that perhaps four people was the max, but even then, they prefer to split that up into groups of two. Smaller groups make it far easier for actors to personally interact with visitors, for jump scares to be effective, and to let the feelings of isolation get a grip. 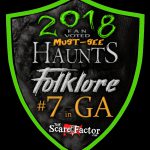 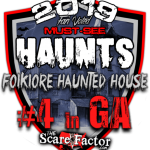 Casey C. – 10/10 – October 18, 2017An experience that plays with 4 out of the 5 senses. You forget the real world exists when you pull …show more in the gate at Folklore. I had a wonderful time and cant wait to return this year to see the new screams they have for me.

Most Safety Aware (Given by: Team NecronomaPeach)