Frightmares IN is a Haunted Attraction located in Linton, IN. 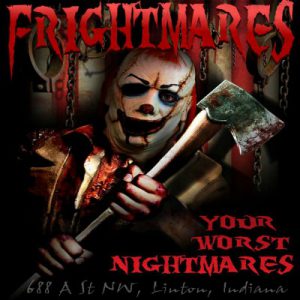 Frightmares Haunted House in Linton, Indiana has returned for their 6th season in 2016 and, this year, they are taking you back to their original theme: “Your Worst Nightmares!” What exactly do those nightmares involve, you may ask? Well, let’s see… spiders, tight areas, dolls, ouija boards, clowns, untrustworthy flooring and a chainsaw are just some of the things you will experience inside. Keep an eye out though; like one character you may come across, you just never know who or what may sneak up behind you. They also had us summon the spirit of Satan too, so prepare for that as well! Frightmares remains one of the lowest-priced haunts out of all of those we visit, so if you’re in their neck of the woods (err… town), do be sure to stop in! Oh yea, be on the lookout for the occasional wascawy wabbit too!

Upon arrival, we were clued in on the fact that they were short-handed on crew members during our visit, but despite this, a few of them did a good job at taking over several roles. The eyeless lady did this effectively and ended up being among the most believable. Our tour guide was very familiar with the scenes and knew just when to trigger some of the scares. The clowns were arguably the most energetic while we made our way through the nightmares, but unfortunately the rest of the cast weren’t quite as enthusiastic, which made them less believable.

Many different costuming pieces were noticed along our journey this season. However, we couldn’t make them all out due to being in dark areas or not being able to see the entire bodies of those tormentors (they were hiding behind the walls). Quite a few latex masks were used and, while most of them seemed to “belong” on the characters wearing them, it was harder for us to hear what they were saying when we passed through their areas. Makeup was mostly minimal, but the clowns looked very well-covered and blended in with their scenes wonderfully. The lady with no eyes had “the blank stare” routine down pat and our tour guide had a bloody, unzipped face. The most intricate and believable of the costumes at Frightmares included a very “realistic” statue and a rabbit that we stumbled upon in the Toy Shop!

Multi-colored lights, a large, color-changing sign near the road displaying the haunt’s logo, a hearse and the noticeable “Open” sign made it pretty hard to pass up Frightmares. Parking around the building is limited, but free, and the owner has informed us in the past that additional (also free) parking can be found in the Southern Indiana Workwear parking lot nearby. The ticket booth serves as both the ticket window and concessions stand during your visit; they offer pop, chips and candy. The general admission line and VIP are marked, so figuring out where you need to go should be pretty simple. Friendly staff can be found in the ticket booth and at the beginning of the house in case any questions are to come up and your tour guide can, ultimately, assist you if you have any issues while you’re going through the haunt. There are a few stairs and ramps that must be traversed once you get inside, so be sure to watch your footing. A free photo op can be found upon exiting the attraction near the hearse. Videos and a few staff entertained the queue line during our visit to help pass the waiting time.

The multi-colored lighting that was illuminating the building, and the presence of the ticket/concession booth pretty much led us to believe we were at a haunted house. But, the hearse out front, signs and coffin definitely confirmed that we were. The owner greeted us in full costume, so that was an added touch for this trip. From the first time we visited this attraction several years ago, their outside atmosphere has improved quite a bit! Appropriate, Halloween-type music could be heard throughout the queue area, which helped set the tone of the attraction. Every now and then, a group would come barrelling out the haunt’s exit, which increased our anticipation to enter so we could be chased out too!

Most of the effects that you’ll encounter here have been created and built in-house, so you may see some things you’ve never quite seen before. A perfect example is their ouija board/levitating table effect. All we know is we were told to use the planchette to call out to Satan. When one of our group members (reluctantly) placed their hands on the planchette, it would light up and go back dim upon removing their hands. Shortly after, the table beneath the ouija board started levitating! Now that’s very unique and cool! When it comes to the sounds, we didn’t hear them everywhere. But, when we did hear them, most were appropriate for the scenes we heard them in. The carnival music in the 3D area was a bit more reminiscent of something more happy that you would hear at an amusement park though, so it came off as a bit odd. The 3D portion’s scenes were very vibrant and had some effective artwork that helped in providing unexpected surprises. Additional effects that we came across include an elevator that couldn’t make up it’s mind, potions, a filleted little piggy, a loud horn, a vortex tunnel, toys and a screaming saw!

Your worst nightmares may be found lurking inside Frightmares Haunted House this season. From clowns, the dark, evil spirits and summoning the dead to butchered bodies, spiders, tight spaces and toys, a large variety of scenes can be experienced here. Because this theme can carry such a wide assortment of characters and themes, we didn’t really notice any one, particular storyline that was being followed, so everything seemed to fit what they were aiming for. Their goal was to include something that would frighten everyone and they sure went all out on trying to find the “smallest” of fears!

Frightmares had several different fright techniques to show us during our visit, although we must say that the air surprises were encountered the most often. An interactive game did quite the job at providing an unsuspecting surprise as well as the the first room of the toy shop. We won’t say too much about either of those so we don’t ruin them! If you are afraid of tight spaces, clowns or the dark… well, they have you covered in those areas too! What about Satan? Although we never did run into him, a hovering table signified his presence and proved to be a little creepy. Several unique hiding spots within the walls and panicked dialogue left us wondering what lied ahead of us. When you near the exit, make sure you keep all your limbs tucked in close to your body, for if you don’t, you just might get one sawed off!

General admission to experience the nightmares that await you within Frightmares will cost you $10.00 per adult or $8.00 per child (10 and under). Do keep in mind, they are known to “keep people’s children” on occasion though! If the line is long and you need to get through in a hurry, VIP tickets can be purchased for $20.00 and will greatly minimize your wait in line. Although each group’s tour time may vary, it took us 10 minutes to navigate the haunt in its entirety. That brings the amount of entertainment received per dollar spent to right at 1 minute per dollar, which is below average this season (“average” is 1.5, calculated from all the haunts we were able to visit last year). Frightmares always has some unique tricks up their sleeves, so if you are in the Linton area, stop in and pay them a visit!

Actor Shout Out Award - Eyeless Lady (Given by: Team Zombillies)