FriteLodge Haunted House is a Haunted Attraction located in Indianapolis, IN.

This was our second season visiting FriteLodge and we sure are glad we decided to come back! Located within the Acton’s Pleasant Masonic Lodge, this is a non-profit, family-friendly haunted house that’s packed with many different nightmares for their 9th season in operation.

Each year, the haunt gets taken down and totally revamped, so there is always going to be a lot of fresh and new things to experience here. Their theme changes as well and, this year, it is “Don’t Go in the Basement.” Ironically enough, the entire haunt takes place… in the basement! Step beneath their unique entrance and heed the warnings of the Deputy, who has been searching for the guy on the wanted posters known as “Tommy.” Many other fears can be found in the basement as well, but we suggest seeing if you can find Tommy before he finds you!

We were informed that, on any given night, there are typically between 15 to 20 volunteer cast members and, in this small area, that is actually quite a few! They virtually eliminated any dead spaces and made it to where there was something going on around nearly every corner! It’s obvious that this crew is doing something right and each of them were working their hardest to provide scares to the group.

Dialogue was much more interactive and character-specific this year. The actress in the church scene was the most interactive with our group, as she tried to exorcise a possessed boy and called on us for assistance. When our help (clearly) wasn’t enough, she demanded that we get closer to him and try harder! Several other characters warned us of somebody named “Tommy” and the Deputy, who also had one of the most realistic performances of the tour, explained how he had been chasing him for 16 years now! But, there was one last clue that he needed to help him get back on track… one of our names. Oddly enough, he seemed satisfied with that and ran off into the darkness, never to be seen again. We also came across a lady who threw cat litter at us, the elusive “Tommy” himself who was very energetic and eagerly hesitant to give us some candy (you’ll know what we mean if you find him) and a black, shadowy figure that popped up behind us and stalked us until we were well out of their scene. The snake wrangler also gave us a good performance, wrestling a giant snake and using character- and scene-related dialogue like, “My pets… they’re so hungry!”

Many of the costumes seemed to consist of custom-made items or ones that we don’t see very often. A good mixture of masks and makeup were noticed. Some of the masks were store-bought pieces that weren’t as authentic looking as those that were of higher quality, such as the rabbit and those made from burlap-looking material. There was also an assortment of makeup techniques in use, from simple wounds and minimal additions to darkened eyes and one guy who’s skin was starting to seem scaley! Some of the attire blended in so well with the scenes around them that it was very easy for them to sneak up on us and get some easy scares.

Our trusty GPS lead us right to this place, but just keep an eye out for a green-illuminated building with tall columns out front that are literally crawling with skeletons. There was a lighted sign close to the road that directed us into the entrance and a flagger pointed us to a spot in their well-lit, paved and free parking lot.

The ticket booth is situated in a small building between the parking lot and the Lodge and two portable restrooms are available if you need them. We recommend using the blue one… it was much cleaner during our visit! Also in this area, you’ll find a vintage hearse, a FriteLodge photo op, a bonfire with nearby seating, some classic rock music and the occasional clown for entertainment (not to mention all of the screaming customers coming out of the haunt and their “clean” porta pottie).

Because the haunt is located in the basement of the Lodge, there are some stairs involved that you’ll need to be able to get up and down. The rest of the flooring is nice and smooth and we didn’t notice any other real safety hazards. If you ever need any assistance, lots of friendly staff members can be usually found near the ticket booth (which is also near the exit of the haunt), on the front patio of the Lodge and at the entrance to the haunt in the basement.

If the big green facade of the Lodge building that’s covered in skeletons, fog and other Halloween decor isn’t enough to make you believe these guys are into the spirit of the season, then we aren’t sure what will. The classic rock music near the ticket booth and down in the basement near the haunt’s entrance does a good job of giving the place a fun atmosphere that’s easy to spend some time in. Though, the front of the building is actually pretty quiet (except for the music coming out of the basement), so there’s a lot of emphasis on the aforementioned Halloween props to slip you through a spooky scene before getting dumped back into Bohemian Rhapsody.

Meanwhile, back by the ticket booth, the classic hearse, loud horn, spider web-painted photo op, creepy characters and scared customers coming out of the exit provides an ideal, old-school-haunt type of atmosphere.

We can honestly say we’ve never seen a working overhead door used as a haunt entrance before… except for at FriteLodge! Granted, being welcomed by a narrow, white garage door that squeaks up the wall isn’t the scariest way we’ve been introduced to a haunt, but it’s definitely the most unique!

The folks at FriteLodge have done a good job of squeezing nearly every inch of space out of their building’s basement. What that also means is you’re going to get hammered with a lot of relatively small scenes in a short amount of time. The good news is, they’ve packed a lodge-load of crafty special effects into the space they have to work with.

For starters, we noticed some good sound effects almost the whole way through the tour this year! Everything from downright creepy sounds, a siren and cantankerous creatures to the blaring of an organ, meowing cats and hideous groans can be heard throughout the basement. They’ve also got some creative uses for old-school effects, such as the laser swamp (that’s becoming rapidly popular) and claustrophobic bags. The laser swamp is actually used more than once; one time is fairly traditional with the addition of a certain “finned” creature, and the other turns the lasers vertically for quite a disorienting effect. Even though claustrophobic bags aren’t exactly new to the haunt scene either, we found this particular one awfully difficult to get through. So much that one of us lost his hat on the way out and had about as much coordination as a newborn giraffe trying to walk on an icy lake! The church scene, however, was perhaps the most memorable and impressive scene in the entire haunt. They used a great combination of orchestrated sounds and lighting to really pull of the finishing touches to their “possession” skit. Other effects include trap-door coffins, a large rat trap, an excess of eggs, snow falling from the sky (err… ceiling), dense fog and much much more!

FriteLodge’s overall theme this season is “Don’t Go In The Basement.” Ironically, by the time they warn you of this, it’s too late (by design we are sure)! The only cohesive element that we could detect was that there were several “wanted” posters of a fellow named “Tommy” plastered on several of the walls. The sheriff gave us the low-down on him while we were in his scene and several of the characters made references to him. But, when we finally crossed paths with Tommy, he hysterically asked us if we wanted some candy and, when we took it from him… well… that was about it. Everything else that we saw was fairly random, or at least seemingly disconnected from the little-known story of Tommy, although they did do a decent job of trying to cover a lot of other common phobias.

With as little amount of time they were given to scare us, we must say we were impressed at how many times they caught us off-guard! Scares seemed to be equally spread out to both of us and, at one point, the lighting and fog combination created such a disorienting path that we got lost and split up in a room much smaller than those we typically get lost in!

After witnessing an exorcism, clowns, a very tight space and more, the haunt’s goal clearly was to play on a variety of fears this season. They even succeeded at using some that we don’t see very often at all. Several good distractions, sudden loud noises and appropriately-placed drop panels startled us the most, as well as a shadowy figure who snuck up on us while we traversed one of the green laser areas! Many times, when we’d check to make sure no one was behind us, we quickly figured out why it felt like we were being stared at.

The church scene was the second to last room of the tour and we got one last “wanna play?” scare attempt before exiting the building. Since that was technically the finale to the attraction, we have to say that the end left us on somewhat of a dull note.

General admission to experience the horrors that await you in the basement is priced at $12.00 per body. This crew has a small space to work with and, because of that, the haunt isn’t very long. This year, we timed it at about 10 minutes. This brings their MPD (minutes of entertainment received per dollar spent) rating to 0.83. Although this is well below the 1.5 average that we see most often, there is a lot to experience jammed into this place and it’s actually quite an improvement from last season. For the price, you can hardly beat it and we were informed that they do plan to expand the haunt into the outdoor portions of the property next year. We’re excited to see what they can build out there!

Even though this is already the cheapest haunted attraction we’ve come across in the Indianapolis and surrounding areas so far, they also offer printable $2.00 off coupons on their website.

Every nook and cranny was utilized in some form or fashion when we went through, making this an action-packed adventure from start to finish. They also had some clever scare tactics, along with other things this review team hasn’t seen before. We can’t wait to see what they have in store for their customers for next year and it will be their 10th season to boot! As mentioned above, FriteLodge is a non-profit attraction run by all volunteers that help raise money for their community by giving to their local needy family fund and local food pantry. If you enjoy having fun and getting scared, all while supporting a good cause, then make FriteLodge one of your stops this year! Just remember, you were always told as a child not to take candy from strangers… but will you take it from them now? 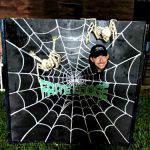 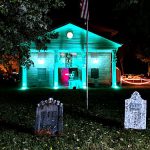 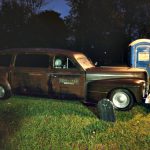 Most Improved Attraction (Given by: Team Zombillies)

Actor Shout Out Award - Mechanic (Given by: Team Zombillies)

Actor Shout Out Award - Victim on Morgue Table (Given by: Team Zombillies)