The Haunted Angelus (pronounced “An-jill-us”) is in their 6th season of operation for the 2017 haunt season. The Indy location is actually a sister haunt to the Haunted Angelus Scream Park (located in Hudson, Florida), both of which benefit the Angelus House (a cerebral palsy group home, also in Florida). Another fun fact: the owners also operate the massive Ron’s Halloween/Patriotic Fireworks superstore in the other half of the building.

As mentioned above, Angelus has a pretty fresh cast for this season. With that said, we were relieved to find that some of them were actually very interactive. The clowns in both the indoor and outdoor areas were the most energetic of the night, climbing all over the scenery, chasing us with chainsaws and one even crawled after us in a bent-over-backwards fashion in the middle of the path, effectively blocking our escape route! Another was riding a tricycle and a different iteration sang to us in both of her cheery and utterly-demonic personas. Dr. Peta’s resident receptionist was debatably the most believable actress of the night, asking us if we’d made an appointment and, upon us letting her know that we hadn’t, warned us that “The doctor doesn’t like walk-ins.” Another notable mention was the subtly, yet creepily-carnivorous Teletubby that kept repeating “Play with me” in a squeaky, child-esque voice while holding its arms out and slowly following after us. Yikes!

Bobby J is a returning favorite that has clearly been refining his “sliding” skills. If you hear a car horn and lots of screams followed by an onslaught of hysterical laughter, it’s probably him doing what he does best! As one of the best single queue entertainers we’ve found, he’s always up for conversation and we’ve never been able to render him speechless.

Though, they did seem to be a little short-handed on the night of our visit. The last portions of the haunt were very light on actors and, in fact, we didn’t see anyone after the boiler scene until we exited the building and made our way into the outdoor maze (about 4 or 5 scenes). We also received our fair share of less-than-stellar dialogue with some resorting to phrases like “Hi” and “Nice shirt” when their initial scare attempts fell through. We suspect this will improve as the season progresses, however, and the cast gains a few more nights of “haunt time.”

Angelus’ actors’ attire is generally done well and we had very few issues figuring out who… or what… was attacking us. It seemed like the clowns were actually some of the best-dressed characters of the night and equal or greater detail was put into their makeup too. The evil teletubbies are, needless to say, “unique” and the black widow character in the cemetery was yet another stand-out.

The haunt’s hearse with a rotating light, Halloween store and haunt banners and multiple queue line entertainers let us know we were at a haunted house. Soon after we arrived, we could hear repeated horn blasts and many screams as Bobby J and Thrash the Clown worked hard to prepare guests for scares before they entered. Innocent patrons were often seen running out of the Halloween store and into the parking lot because they were getting so startled! Other than that, though, there wasn’t much else going on outside the building. But, the queue area is a different story. Once inside, it was much darker and an overall spooky presence took root. The facade to the haunt, eerie decor (including Nora’s favorite… realistic spider webs!) and matching music really helped in preparing us to enter the Angelus. The scaring didn’t stop in this area either. Bobby J can slither around in the darkness… much like a snake stalking its prey, so you can expect some action in this area too! You just may not see it coming…

An exclusive effect was added to one of the areas this year and, although we don’t want to ruin the surprise, we will tell you that this effect was incredibly “hot!” A lot of extra finishing touches have been placed in many of the scenes, making the authenticity stand out even more; cobwebs, dangling animal corpses that looked like they’d been hanging out for awhile, scents and vintage string lighting among others. We also came across many unique, moving components of the scenes, including a shelf surprise, an overhead bed surprise, a torrential rainfall (yes, lots of water coming down from overhead! But don’t worry… you won’t get wet) and a sideways tilting bridge. Additional effects include ghostly furniture, a “lively” hallway, flying ghouls, a giant clown you must walk under, broken pipes and a whole lot more! 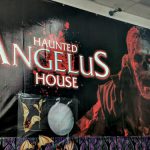 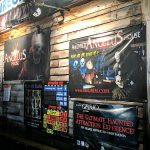 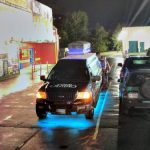 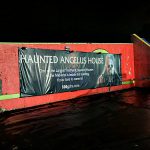