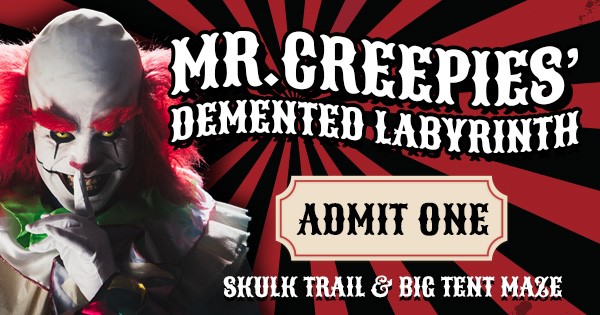 “This dark, weird, disconcerting carnival brings pandemonium and nightmare to all who perceive the siren’s song of its carnival music, or witness the dim, hypnotic perplexity of its seductive labyrinth.”

First up: LUSUS NATURAE SKULK TRAIL
PRECAUTIONS
ONCE STARTED THERE IS NO GOING BACK! There are no exits from the Trail or the Big Tent. STAY ON THE TRAIL AT ALL TIMES! Secondary reasons to stay on the trail include Thorned Vines, Trip Hazards, Varied Entanglements, Dry and Wet Creek Beds, and Thick Mud, to mention a few. Primary reasons to stay on the trail include, but are not limited to, the Ethereal and Abnormal Monstrosities encountered to date–Swamp Creatures for lack of a better term. It seems these creatures have been here for a good long while. Rumors of a Forest Demon, Shadow Fiend, and Swamp Sorceress are recurrent, and go back as far as Choctaw Legend. When encroached upon, the combined powers of the triumvirate are alleged to spawn other creatures of intermingled powers and appearances. Our recent efforts to reopen the SKULK Trail have raised their ire, and apparently created at least one known, and one probable, spawn. REMAIN IN THE MOMENT AND COGNIZANT OF YOUR ENTIRE PERIMETER! A few of these creatures prefer the frontal ambush, others a flanking attack. But the really dangerous ones are the stalkers, the creatures that will follow you from behind and attack when you are not looking. Keep one eye always behind you and the other everywhere else. IF YOU ENCOUNTER A CREATURE, whatever you do, DO NOT RUN! Running will likely separate you from the group. There is strength in numbers. Also running on this trail can quickly lead to a fall. Running, stumbling, falling, and screaming show weakness. Showing weakness will immediately lead to an attack. The best defense is to move together slowly as a group. Even huddle if attacked. If a creature is approximate, and an attack appears imminent, DO NOT STARE INTO THE EYES OF THE CREATURE and continue to move slowly away and not towards. Keep children in hand as they will be the first snatched!

Followed immediately by: MR. CREEPIES’ BIG TENT LABYRINTH
PRECAUTIONS
KEEP YOUR WITS! DON’T LET DOWN YOUR GUARD! The Big Tent is a desperate labyrinth in its entirety. The Disturbing Freaks are an abominable lot, mostly lodged in their ‘cages’ which are open for visitors to walk amidst on show nights. The Demented Clowns are temperamental and unpredictable at best; wicked, evil, and maniacal at worst. However, this is a ‘professional’ show and Mr. Creepies’ employees are trained actors, but like many traveling shows they can pack up and leave the scenes of their crimes at a moment’s notice. Such a traveling show can quickly and easily leave behind devastation with its departure for a new set of victims down the road. MR’ CREEPIES’ DEMENTED LABYRINTH is of that ilk–devious, wily, cunning, and deceitful, so do not trust them. They will take of you all they can to satiate their own twisted desires. Be aware, the Demented Clowns are varied in their deviant dispositions, from cloying and obtuse, flamboyant and asinine, to pathetic and giddy, incensed and insane. So, enjoy the Big Tent experience, but don’t linger, and certainly DO NOT GET SEPERATED FROM YOUR GROUP! Any children should be kept in hand as youth and innocent dreams are what The Creepies most desire!

Swampy Jack’s Disclaimer: “When I contracted with Mr. Creepies it was with the understanding his was a reputable Fall Carnival. This event was to be something fun for all ages and all dispositions. Instead, it is more like SOMETHING WICKED THIS WAY COMES. I was unaware there would be “carnival groupies” straggling along, too dysfunctional to qualify as clowns even among this troupe of misanthropes. And those freak show rejects skulking around, too disturbing and grotesque to be included with the pathetic freak failures who are in the show–those beings are aloof and hostile and so will probably be hanging out beside the carnival tent. So be aware! Stay with your group. Keep your children in hand,…if you are fool enough to bring them to this event. 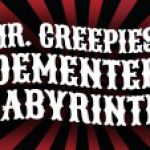 Shawn Taylor – 1/10 – October 29, 2022Wow, what a waste of time and money. Weather was looking nasty for Jay, FL so we decided to go east …show more and give this attraction a try. Very poorly put together and NOT scary. We had 4 teenage boys with us and felt so bad we went to pier Park after to make up for it. Go to Wentz brothers in FWB or Creepy hallow woods in Jay, FL for a fun experience.