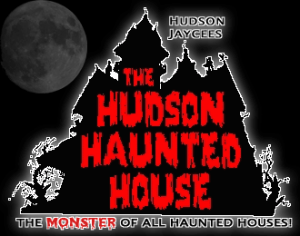 Hudson Haunted House is a charity haunt that packs a whole lot of scare into a smaller space. With almost fifty years under their belt, this haunt is full of layered and detailed scenes, shocking tricks, and devilish delights for young and old. Featuring a variety of original monsters all scaring for a charitable cause, you’ll feel good to be scared. For those with younger party members a matinee performance is run on Sundays with the lights on and a guide to keep the creatures at bay. Charities range from locals in need to larger organizations and emergency response groups. Early season nights sometimes accept canned goods in place of admission to donate to the area Food Bank. Run and staffed by the Jaycees and student volunteers, the Hudson Haunted House is full of screams and heart, both of which they’ll offer you at a low price.

The monsters in Hudson Haunted House were impressively in character and on point when it comes to scares. Back and forth exchanges were plentiful, quick-witted, and our team enjoyed watching the responses fly back and forth without character ever being broken. A ridiculously off-key version of a jaunty sailing tune we used to combat the fear was turned around on us and used for a good scare, which made our night!

Our team was really impressed with the usage of makeup by the actors at Hudson Haunted House. Every face we saw was detailed and nuanced, masks were used more sparingly and always tucked, and each creature was outfitted to match the scene they were haunting. Particular shout outs go to a clown with horrifying facial wounds, some disembodied ghouls that crossed our path, and a disconcerting doll whose eyes left us particularly unnerved.

The staff at Hudson Haunted House were professional and friendly. They were more than happy to talk about their haunt and the positive experiences they’ve had building the haunt as well as the life-changing effect it’s had on some of them. The way we approached the house did make the signage on the street a bit hard to see, but Google Maps took care of locating the proper street and the house itself was easy to spot and very decorated. Staff members are attentive and knowledgeable, so much so that they were able to determine a group was stuck in the maze without any input from the monsters inside. This team of haunters is a tight knit family that loves their work and the charitable outcome that comes from it and it showed in every action they took and every interaction they had with guests.

Country music played from a vendor by the parking lot and the sounds of screams filtered out of the door and across the line as we waited. Haunters and staff kept the excitement high as they taunted and talked with guests, and a very prominent list of all the groups that have benefited from the haunt’s existence was available to study as you waited.

There is an incredible attention to detail throughout the entirety of the Hudson Haunted House. A simulated moon shone thanks to some rather crafty tricks, a room of glowing skulls hid a shocking surprise, and one optical illusion had us questioning our stability and sanity. Sound effects are a little sparing, and there was some bleed, but what we heard used was effective and well-placed. The build team here has put in a lot of hours making sure that each room is just right and it shows!

We particularly enjoyed the skull room and the moon rising over the graveyard.

There is not a unifying theme to the Hudson Haunted House. Instead, it is an old-school haunt with a variety of traditional scenes scattered throughout.

Not a single group that we witnessed exiting the haunt lacked at least one terrified face or a long scream. A patron we talked to listed the haunt as a 1,000 on a scale of one to ten, and one poor soul wasn’t able to even make it inside. Line attendants make sure to balance groups so that haunters are able to pay attention to both the front and the back of the group so that everyone gets to enjoy the scares. Monsters use the environment to come at patrons from all angles and to shock and scare at every chance. The finale of the haunt will have you jumping and fleeing towards the exit.

Hudson Haunted house is a shorter haunt coming in at about 8 minutes in length as their space is limited. On the other hand, we saw staff offer multiple groups a reduced rate to go back through. This may have been because we came at a slightly slower time, but we saw more than one group take advantage and re-enter for more scares. Ticket prices are extremely reasonable and on special nights are reduced to charitable food donations. Considering low ticket prices ($5 for anyone under 48 inches and $10 for anyone above) and the amount of scares you get in Hudson Haunted House, this is not a haunt to be missed! 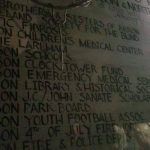 John knight – 10/10 – October 26, 2018I hadn’t been to a haunted house in years and am so glad that a friend and I took the time to check …show more it out!Both the acting and the displays were top notch.Everything seems to come together flawlessly as you inch your way through,I.e. the sounds,visual effects and the acting ability of those involved.The experience there left me with an impish smile on my face the whole time I was there and continued the whole drive home.I would strongly recommend this trip to anyone!congats and admiration to the great staff at the Hudson Haunted House!A true local gem!