Nashville Haunted Woods at Priest Lake is a first-year haunted trail for the 2017 season. Sharing the same property with Nashville Shores, Booville and the Treetop Adventure Park, the stage is set for entertainment and they’re already off to a great start!

NHW offers a good-sized trail and 3 precursory “fear zones” as you make your way into the woods. Dark Harvest is “…a land of jack o lanterns, scarecrows, witches, and a headless horseman that watches your every move.” Next, make your way through a very unique, wild west ghost town in Tombstone: Town of the Dead! Finally, see if you’re quick enough to evade the werewolves inside the ancient castle ruins of Blood Moon Rising before you start your journey through the flagship Haunted Trail. If you’re able to escape the “…chainsaw wielding maniacs, voodoo cursed souls and cannibal clowns,” your reward will be… well… living to tell about it! Not to mention a fun- and fright-filled night with your friends.

Brought to you by the same masterminds of nearby Nashville Nightmare, we beheld a plethora of imaginative creations and realistic scenes. Impressed to see how much they’d accomplished in their first season, we highly recommend stopping by NHW for a new take on some old-school frights!

Most of the characters at NHW portray classic monsters and movie villains. From Jason, Michael, Freddy and Leatherface to witches, clowns and more, there’s a little bit of everything here to satisfy your search scares.

The actors’ interactions with us were very short. Dialogue was limited and a lot of the actors just popped out and “rawred” at us before quickly resetting. Even though we didn’t catch up to any groups and vice versa, we felt like most of them were trying to get back in their hiding spots before the next group could see them. This is normally very much appreciated, but when there aren’t any groups coming up within sight, it can make the scares seem rushed and the characters less believable. Though, there were exceptions to this that did take the time to deliver an adequate performance.

The voodoo people had some of the best dialogue on the trail. One of them even warned us to “Be careful driving home” that night after creepily chanting at us! Another came after us with a knife screaming “Let me eat you!” This actress, whom we found in the kitchen, turned out to be one of the most believable characters of the tour. A few of the cast members got pretty creative with their scare techniques. Some would come at us from under the furniture, others would reach through holes in the walls and a few even came after us multiple times after we thought they were finished.

The costumes were the main variable that allowed us to distinguish one character from the next at NHW. While we did find a few generic masks and simple cloak outfits, we also saw several well-placed ghillie suits, a realistic wolf, an old western sheriff, a fancy victorian dress and a variety of other worn and tattered wardrobe selections to name a few. Each of the costumes were matched to their respective scenes and ranged in their levels of detail and authenticity. Makeup seemed to be adequate, when used, though we did find one or two actors that looked like they could’ve benefited from some additional touch-ups.

Our trusty GPS led us to the entrance to Nashville Shores, where we then saw a well-decorated hearse and signs for NHW. From there, there were several A-frame signs and a flagger that led us to the large paved parking lot. Getting to the ticket booth involves making your way through some of the incoming and outgoing traffic, so do be careful as you make your way around on foot.

Once we cleared the traffic, we saw a large screen displaying horror movie trivia near the queue area for the ticket booth. Friendly staff members helped us find the appropriate ticket line and sold us our tickets before sending us on our way to the head of the trail. Another was stationed at the top of a small ramp and was helping guests walk up it after someone had spilled something slippery, which proved to be helpful and very much appreciated! On that note, bring some sturdy and comfy footwear, as this is an outdoor trail and there’s a fair bit of walking involved just to get to and from the haunts. It may also be wise to wear clothing that you don’t mind getting dirty; there are a couple of really fast slides along the trail, the landing areas were pretty muddy on the night of our visit and, if you’re not careful or coordinated enough to slow down or stand up quickly when you get to the bottom, there’s a chance you could end up bringing some mud home with you.

Of course, before you leave, be sure to swing by the gift shop for some souvenirs!

When you first arrive at NHW, there’s a heavy park / resort feeling that’s brought on by the main ticketing gate and the other attractions on the property that you’ll pass on the way to the parking lot. There are several NHW signs, music, horror movie trivia questions on a screen near the queue area and a Nashville Nightmare hearse that’ll let you know you’ve arrived at a haunted attraction. Aside from that, though, the feeling that you’re on vacation doesn’t really start to leave until after you get past the ticket booth…

As we made our way past the lake, we found several skeletons and tiki torches lining the path. Looking out over the water and seeing the haze of fog lingering over it while hearing customers’ screams coming from the trail did wonders for kicking us into “haunt mode!” After that, we really started getting the itch for some scares when we arrived at the first “fear zone.”

Dark Harvest had some great sounds, but no actors or animatronics that were really providing scares, so this ended up being a great place for some photo ops with all of the sets that were built there. Special thanks go to the super-friendly staff member that played cameraman for us! Tombstone was debatably one of our favorite areas of the night; you just don’t see too many old west ghost towns in haunted houses and, if you do, they probably aren’t as cool as this one! As we walked down the wide-open street, we nearly stepped over a life-sized dead horse, could hear the harrowing sounds of wind and rolling tumbleweeds echoing through the storefronts, saw a man that’d been hanged in the middle of town and a witch that had been burned at the stake! Pick any western show that walks you through one of these dusty old towns and you’ll have a pretty good idea of what it’s like. All that was missing was good old-fashioned duel! The massive castle facade for Blood Moon Rising served as the final fear zone and the entrance to the trail.

NHW had some of the most elaborate scenes and effects that we’ve seen used in an outdoor attraction. With a mix of open sets and small buildings to go through, this haunt was able to recreate a wide variety of environments that were suited for the scares within them. Some of the areas (excluding those mentioned in “Atmosphere” above) included a couple of clowns’ workshop, the Myers house, Camp Crystal Lake, an elaborate cemetery, a ship, a vehicular wasteland, a voodoo swamp area, a castle and the nightmarish dreamworlds of Freddy Krueger! Because there’s a mix of indoor and outdoor areas, the levels of detail and immersion varied as well. A few of the most memorable props that we saw include a dead horse, a swaying bridge, a man-eating shark, a giant Freddy face that doubled as the entrance to a scene, animal trophies, a large truck, super-fast slides (yes, a slide!), a claustrophobic passage and body bags. To complement the scenes, we also heard several well-chosen sound effects; some of these included wolf growls, a “Purge” announcement, ominous music from well-known creators like Midnight Syndicate, circus music and various horror movie soundtracks.

Some of the animatronics didn’t seem to be working when we passed by them, so we aren’t sure if they had a faulty section of their air system or not, but we’ve seen most of them in action before and can tell you that they’re normally really effective!

With all of the different scene and genres that are offered by NHW, and considering that no theme was made evident to us during our tour, there isn’t really a way to accurately score or review this category. From a cemetery and movie villains to voodoo-cursed people and clowns, come prepared for a little bit of everything.

Nashville Haunted Woods uses a combination of special effects and actor-driven methods to deliver scares to guests with an emphasis on the latter. During our tour we came across several good hiding spots, a few loud noises, a chainsaw attack, creepy decorations and realistic scenes that set the stage for a more believable experience. As mentioned above, most of our run-ins with the cast were short lived and a few of the special effects weren’t working while we were there, so our visit to NHW didn’t exactly send us home in need of a change of underwear. But, we still got startled multiple times and had a blast checking out all of the awesome scenes that were on display!

Tickets to trek through the terrifying timbers at Nashville Haunted Woods are priced differently based on when you go during the season. For us, we visited them towards the end of October when the prices were the most expensive, so general admission was priced at $24.99 plus tax. If you go earlier in the season, tickets can be had for as low as $19.99 plus tax. “Slash Pass” admission is an additional $10.00 per person and grants you access to a shorter wait time, which is especially convenient on busy nights.

Including all of the “fear zones,” it took our group a total of 23-1/2 minutes to navigate the haunt in its entirety. Before purchasing tickets, we were told there was a rather large line, so we opted for the Slash Passes. We were thankful for making that decision because we still had another haunt to visit and we were the only guests in the Slash Pass line, so we basically got immediate entrance. However, because of our limited interactions with the cast and malfunctioning special effects, we didn’t leave feeling like we got our 70-some dollars worth of entertainment. With the amount of time we spent inside the attraction and considering the quality of entertainment that we received, the general admission price seems like a hefty amount for the woods… at least for the 2017 season.

There were many unexpected surprises here for a first-year outdoor trail, including some amazing sets. After a fantastic start, we’re sure they’ve got so many more wicked tricks up their sleeves that they’ll show some massive improvements in the future. After all, these guys and gals don’t take haunting lightly! We still recommend visiting the attraction as soon as you get a chance next year, but we would advise going sooner in the season, if possible, when the lines aren’t so long and admission is cheaper. They also had a 3-minute escape room on-site that can be found at the exit of the trail for those who like to test their problem solving abilities.

If you love horror movies and are looking for a decent-sized walk through the woods with some classic villains and custom monsters, then be sure to pay them a visit! Oh, and rumor has it that there may be plans for a hayride in the future! 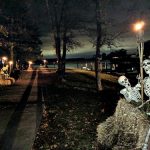 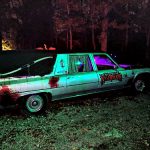 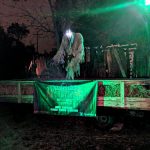 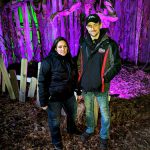 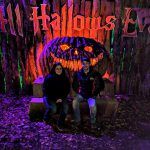 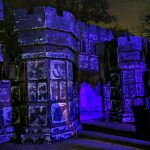 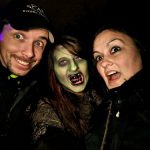